Lipless crankbaits and umbrella rigs got the job done on Chick 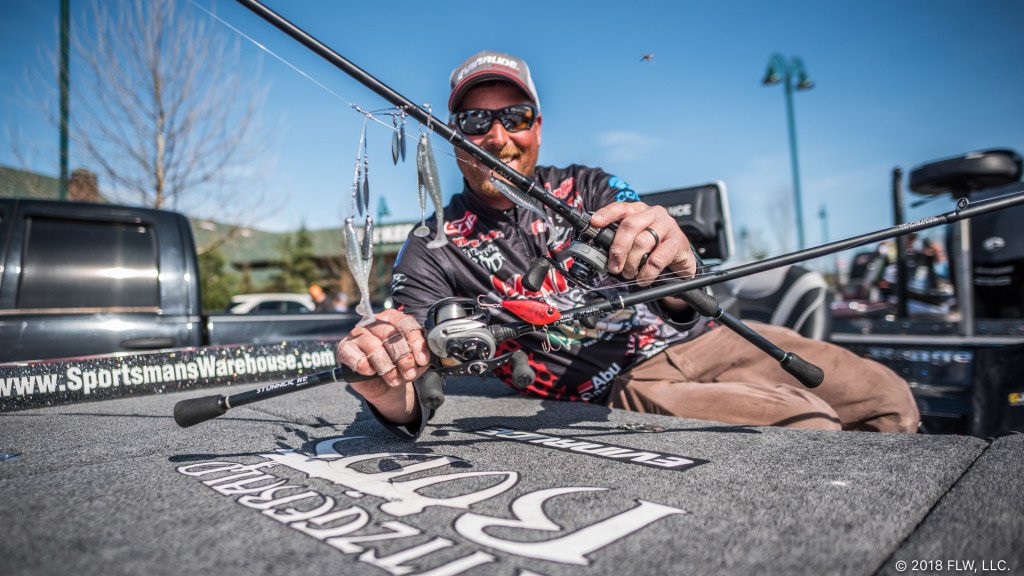 Prespawn on Lake Chickamauga usually means a healthy dose of lipless crankbaits and umbrella rigs, so it wasn’t surprising that those were exactly the baits that dominated for the top 10 at the Costa FLW Series Southeastern Division event presented by T-H Marine on the east Tennessee fishery.

Square-bill crankbaits had their place, as did vibrating jigs and a variety of other baits. In the end, though, the common thread connecting many of the anglers in the top 10 was either a trap or a rig.

Here’s a look at the baits used by the top 10 pros on Chick. 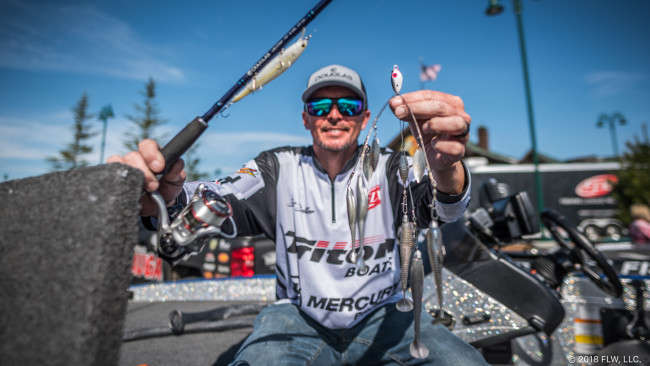 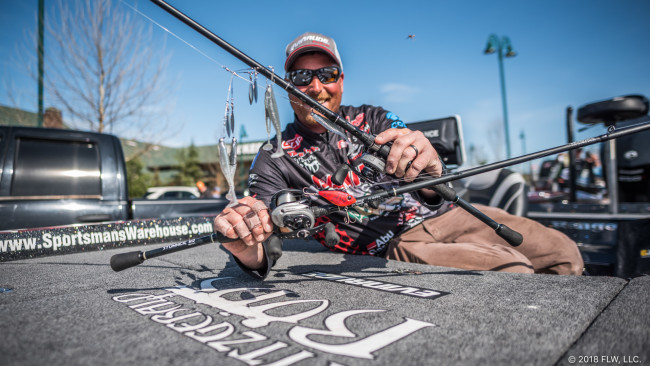 2. Bryan Thrift caught a couple good fish per day on an ER Lures umbrella rig with 3/16-ounce homemade jigheads and Damiki Armor Shad swimbaits. He threw that on a heavy, 7-foot, 3-inch Fitzgerald Stunner rod with 20-pound-test P-Line fluorocarbon and an Abu Garcia Revo STX reel. His other bait of choice was a Damiki Tremor 65 (red craw), which he threw on a medium-heavy Fitzgerald Stunner rod paired with an Abu Garcia Revo STX reel spooled with 15-pound-test P-Line fluorocarbon. 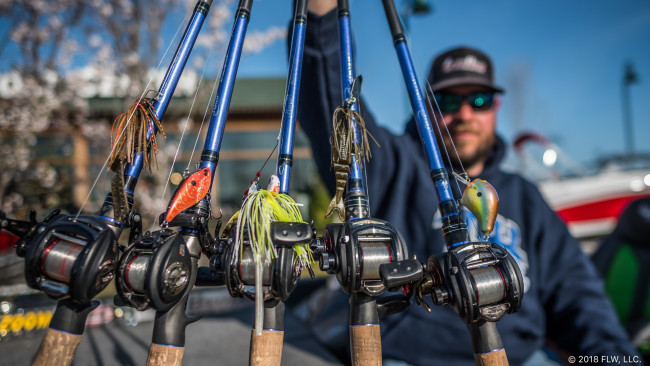 3. Derek Hicks used more baits than perhaps anyone else this week. He caught many of his fish on day three with a homemade 5/8-ounce brown and orange jig with a Zoom Super Chunk trailer. He also used an XCalibur Xr50, a green pumpkin Z-Man/Evergreen ChatterBait Jack Hammer, a Zoom W.E.C. crankbait, a spinnerbait, and an umbrella rig with four blades and Zoom Swimmin Super Fluke Jr. swimbaits. 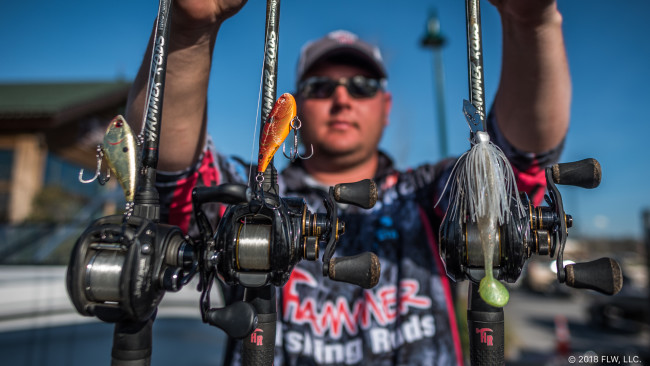 4. Cody Nichols caught almost all of his fish on just a handful of baits: a Rayburn red XCalibur One Knocker, a gold with black back BOOYAH One Knocker and a white Z-Man/Evergreen ChatterBait Jack Hammer with a Reaction Innovations Skinny Dipper trailer. 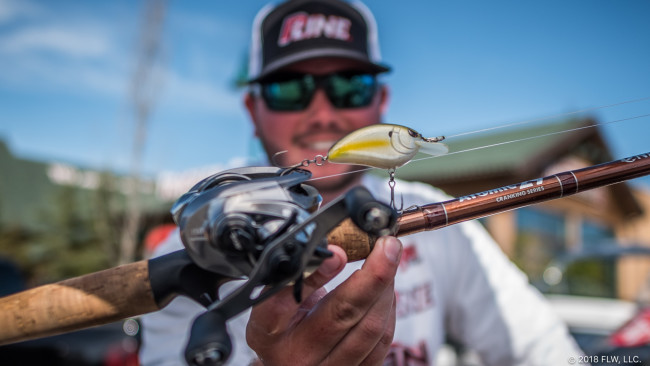 5. David Gaston used just one bait the entire tournament: a SPRO Little John in clear chartreuse. He threw it on an Enigma 7-foot, medium-heavy rod and a Shimano Curado reel spooled with 15-pound-test P-Line Tactical fluorocarbon. 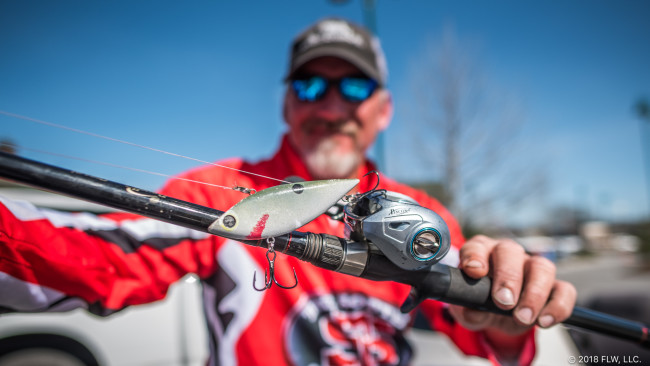 6. Rusty White caught all his fish on one bait: a generic 1 1/3-ounce lipless crankbait blank that he painted in a gizzard shad color and fitted with Mustad KVD Elite Series hooks. He threw that bait on 20-pound-test Berkley Trilene Big Game monofilament line, which he says helped keep the bait where he wanted it in the water column. 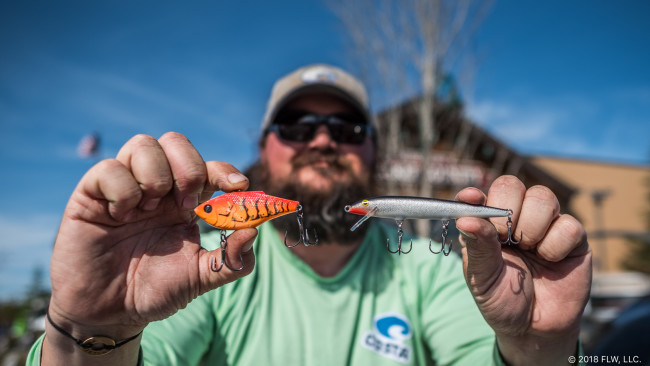 7. Dustin Evans did his damage with a 1/2-ounce 6th Sense Quake Thud lipless crankbait in a bright orange color, which he says was perfect for the muddy water. He also used a Rapala Original Floater in areas where he had to cast to a foot of water or less and wanted to match the shad in the area. 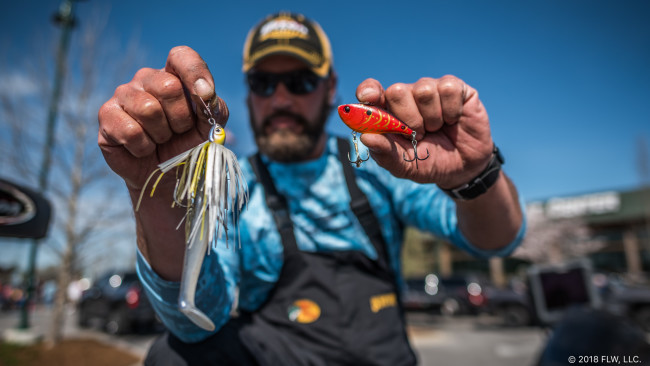 8. Brandon Stanley primarily relied on a craw-colored 1/2-ounce BOOYAH One Knocker lipless crankbait to catch his fish on day three, but a white Z-Man Project Z Weedless ChatterBait with a Strike King Shadalicious trailer produced most of his big fish throughout the event. 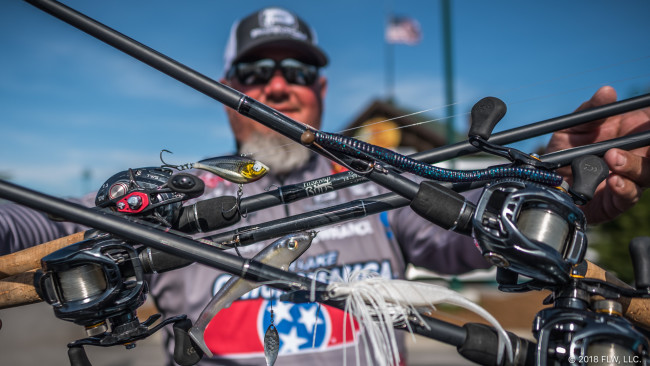 9. Buddy Gross employed a number of baits to catch his fish, including a Z-Man ChatterBait with a Zoom Fluke trailer, a shaky head with a Zoom Magnum Trick Worm, an Azuma Shaker Z lipless crankbait, and old faithful – a Scottsboro Tackle Co. Swimbait on an Owner Beast Flashy Swimmer hook. 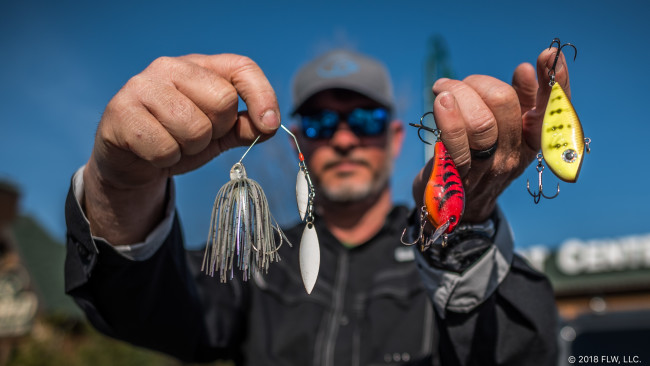