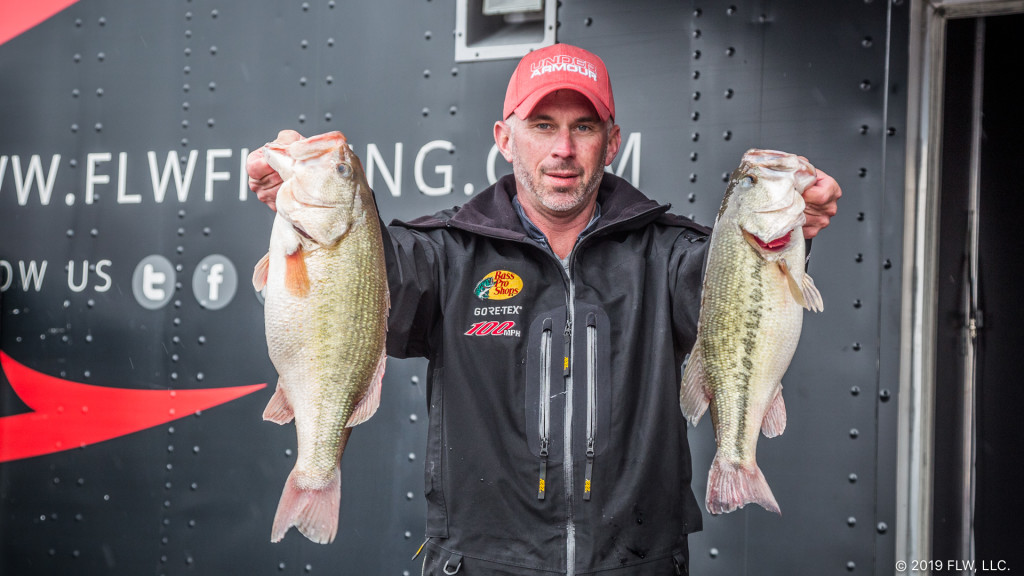 Jake Morris leveraged a hot morning bite to sack up a 24-pound, 10-ounce bag that leads day one of the Costa FLW Series Central Division opener presented by Lowrance on Kentucky Lake.

“I caught six fish today. I culled once, and then I left them alone,” the McKee, Ky., pro says. “I just went practicing after 10:30. I had been getting a few bites in practice, but I didn’t have a clue what lived there.

“This morning for about 45 minutes, it was just wham, bam, bam. I left them biting, but tomorrow’s a different day.”

Morris says he had three or four prime spots within his main area, so he moved around until he found the active fish.

His area comprised a mix of rock and wood in 5 to 6 feet of water. His fish were clearly new arrivals, as indicated by their pale coloration.

“They’ve been deep all winter long, and now they’re moving up, getting ready to spawn,” Morris says. “They turn white in that deep water where they don’t get any sunlight, but they’ll get darker as they move shallower.”

“The bite really wasn’t aggressive, and they didn’t hardly fight either,” he says. “Four of the fish I caught, I didn’t even feel the bite; it just got heavy. I don’t understand that part. You’d think they’d be really mean right now.

“They didn’t even jump. I’d just dip them in the net – easy. It was just one of those days.”

Understandablyguarded in his details, Morris says he caught fish on a reaction bait and a jig. Carrying a lead of 4 pounds, 8 ounces into the second round of competition, he’s cautiously optimistic about getting back on the juice.

“The key was that I had the spot all to myself,” Morris says. “I hope nobody else finds out because there’s no pressure whatsoever, besides crappie fishermen. I look like I’m a crappie fisherman because there are about 12 crappie guys around me. I just hope I can catch as many as I did today.” 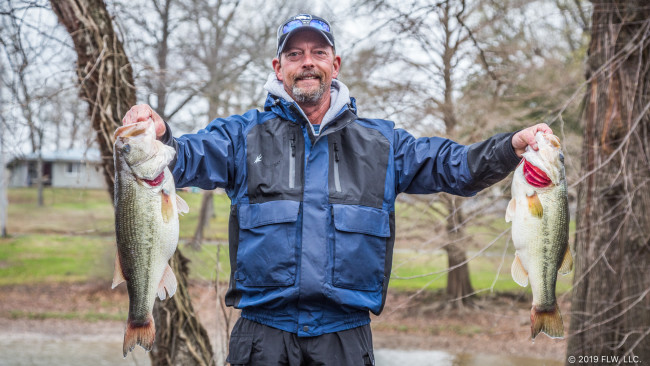 If you can only catch two fish, it’s pretty cool when you get a pair that’s big enough for the tournament lead. That’s the case for Bobby Griffith of Mayfield, Ky., whose two-fish catch totaled an even 12 pounds.

Paired with pro leader Jake Morris, Griffith caught his 5-pounder shortly after arriving on the spot. His 7-pounder came about two hours later.

Both of Griffith’s fish bit a white ChatterBait with a pearl white grub trailer. Oddly enough, both fish exhibited a different level of urgency.

“One just killed it, and the other one just got heavy,” he says. “It was two different bites altogether.”