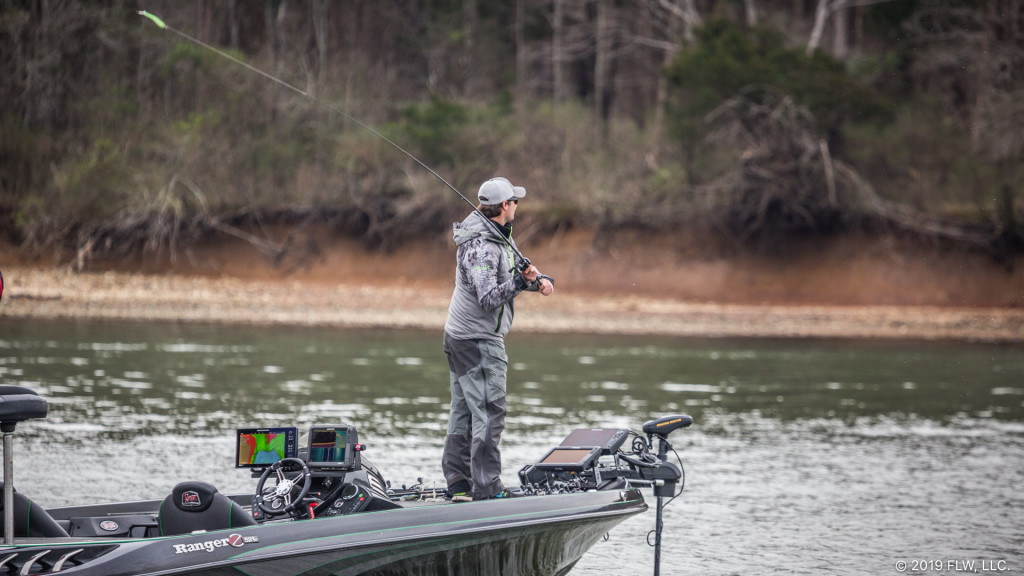 An early flurry on a prespawn staging area delivered a five-bass limit of 24 pounds, 10 ounces for McKee, Ky., pro Jake Morris, who leads day one of the Costa FLW Series Central Division event presented by Lowrance on Kentucky Lake by a margin of 4 pounds, 9 ounces.

Targeting a mix of rock and wood in 5 to 6 feet of water, Morris caught his fish on a reaction bait and a jig. 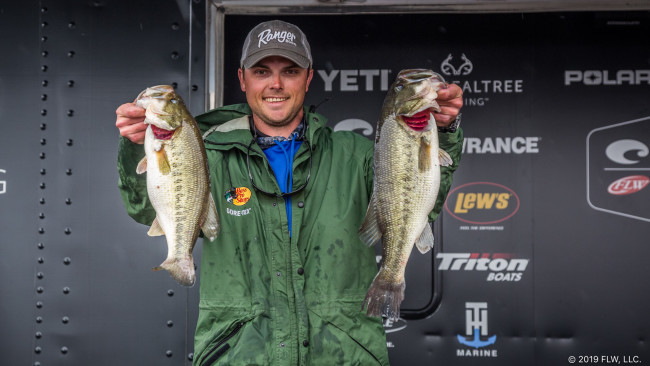 Facing a scenario of displaced fish, second-place pro Jimmy Washam (shown in the lead image above) put himself in position to intercept advancing prespawners. The strategy worked, and the Tennessee pro turned in a limit of 20-1.

“There are a lot of big fish in the lake, but right now they’re so scattered that it’s just hard to pinpoint them or put yourself in an area where you can be around five good fish,” Washam says. “We have low water, so the fish don’t know where to go. Right now they want to be on flats. They want to be in places where they’re at when it [the water temperature] is 60 degrees, but there’s not a lot of that to be had with the low water.

“Practice was tough, but we had sunshine yesterday, a warm night last night and clouds today. So I went to an area where I anticipated that those females would get off their suspended mode and actually move up on some stuff where you could fish for them.”

Washam describes his area as a funnel for fish moving into the backwaters. He fished mostly hard cover and caught four of his limit fish on reaction baits. No. 5 required him to slow down and flip. 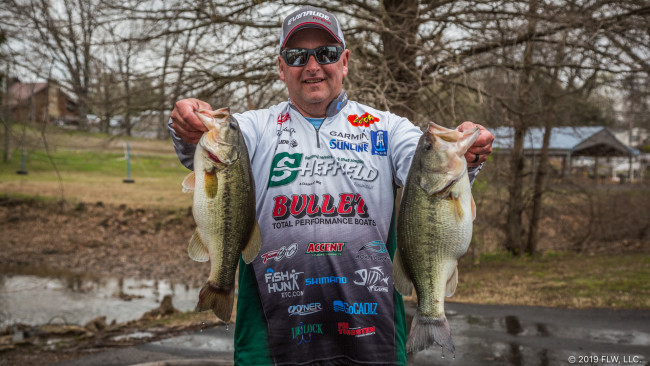 Adjusting his focus was essential for third-place pro Ramie Colson Jr., who caught a limit of bass that went for 19 pounds. As he explains, a subtle warming trend prior to the tournament spurred the fish to move toward their spawning grounds, but today’s meteorological makeup slowed the progress.

“I caught five keepers today. I had three or four shorts, but I only had five keepers. It’s tough, and I’m blessed to catch five.”

Fishing in 8 to 10 feet, Colson targeted a mix of prespawn habitat, including brush piles, chunk rock and bluff walls. He caught his fish on a jig, spinnerbait and lipless crankbait.

“I fished south Lake Barkley. I ran a tank of gas out and then some,” Colson says. “I figured over there I could get away from the crowds, but it was still tough.” 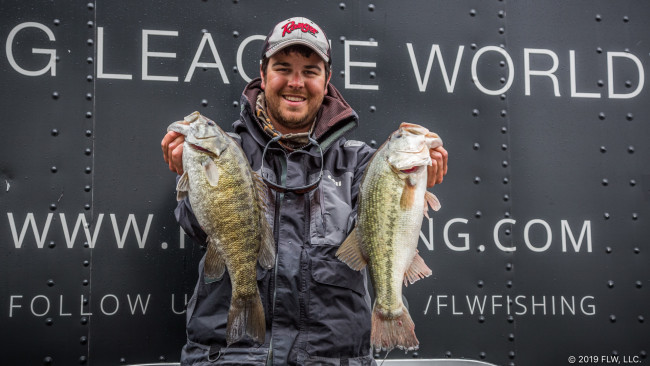 A constant threat in Kentucky Lake events, the former Bethel University standout tried his usual faves, but Cole Floyd still found himself needing to scramble to locate productive options. This he did en route to catching the fourth-place bag of 17-11.

“It’s tough. The fish are scattered, there’s no current, the water’s really clear,” Floyd says. “I stopped on a couple of offshore places, and I had one bite and missed it. So I just put my head down in a couple of areas, fished slow and picked them apart.”

The grind put a quartet of keepers in his boat, but an afternoon flurry made his day as Floyd finished and made a couple of key upgrades.

“In the last five to 10 minutes I had to fish, I caught three back-to-back,” he says. “They were eating gizzard shad. On one of my better places, I could visibly see the gizzard shad.” 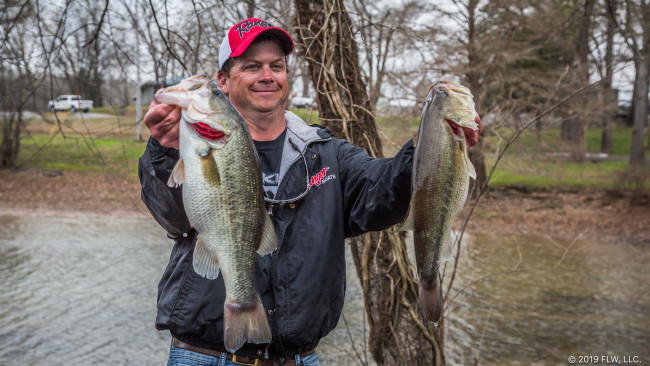 The day’s weather did Shawn Penn a solid, as the Kentucky pro took advantage of cloudy skies to fish a spinnerbait and sack up a bag of bass that weighed 16-13 and earned him a fifth-place spot to start the tournament. The flashy reaction bait is a good choice for a search bait, and that’s just what Penn needed.

“I was just covering as much water as I could to get a bite,” he says. “The cloud cover helped because it cut down the visibility in the clear water. If it was sunny, I never would have caught one on a spinnerbait today.”

Penn also points out that rising water temperatures – up about 3 degrees from his practice reading – spurred a few fish farther along their spawning migration.

“The majority of my fish were prespawn staging, but one came from spawning grounds,” Penn says. “I just think the water temperature where I was fishing rose, and they’re coming up.”