Last wave of spawners proving to be elusive 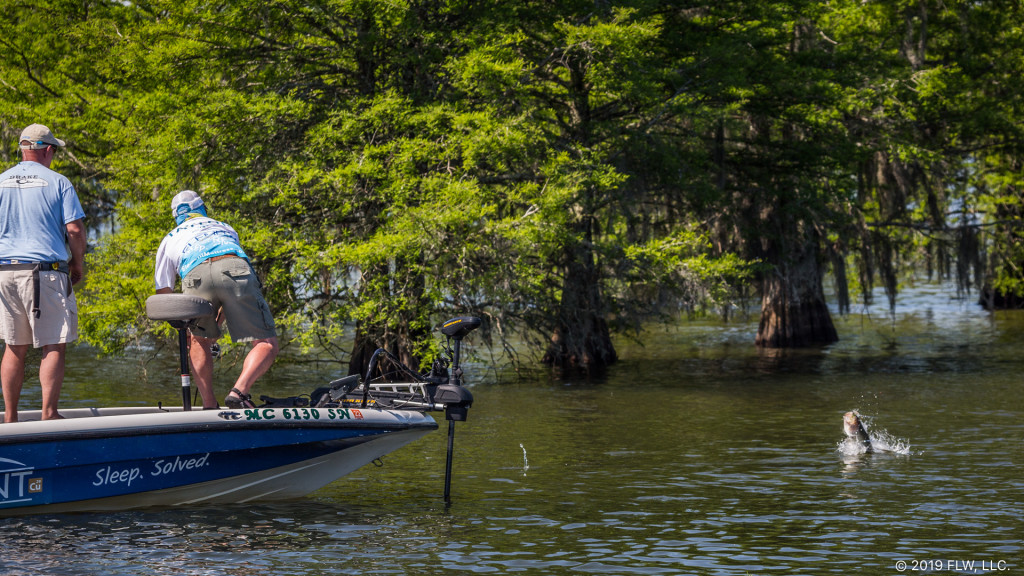 If ever there was a day for sight-fishing on Santee Cooper, today is it. All that’s missing so far has been the fish.

Despite a forecast of clouds and wind, day one of the Costa FLW Series Southeast Division finale presented by Power-Pole on the South Carolina fishery has been nothing but blue skies, sunshine and little wind. Hence why a vast majority of the anglers we ran into out on the water today were trying to sight-fish.

The problem is almost every angler we spoke with today said all the big girls they’d marked in practice were gone. Local sight-fishing stick Mark Hudson found a small area yesterday where he thought he could Power-Pole down and catch a 30-pound limit. Today, only a couple bucks were left. Same for Michael Conley, who had a tiny tree with four 4-pounders sitting around it yesterday. The bass were so aggressive he caught one reeling his lure away from them. Today? Gone.

That said, Hudson still did manage to fill his limit sight-fishing in front of us, though it’s not a big limit. However, his co-angler, Adam Haithcock, had a 6-pounder.

Meanwhile, some anglers have been able to capitalize on a bed-fishing deal around isolated cypress trees. It’s painfully slow and random, but Rick Taylor was working on a bag in the upper teens when we left him fishing for bedding fish he couldn’t see. Bart Adams was on a similar pattern, but he lost a pair of giants (and his co-angler caught a third), so he only had a disappointing three fish when we left him.

Jim Moynagh also checked in with a 16-pound bag, but after that, it was a whole lot of ones and zeros, as every angler seemed confused as to why the bass had left their beds so quickly.

Weigh-in starts at 2:30 p.m. ET, and we’ll still be treated to plenty of big fish. Plus, we never got to Moultrie today, and who knows what that lower lake might’ve served up?