Everything was on the table at Table Rock 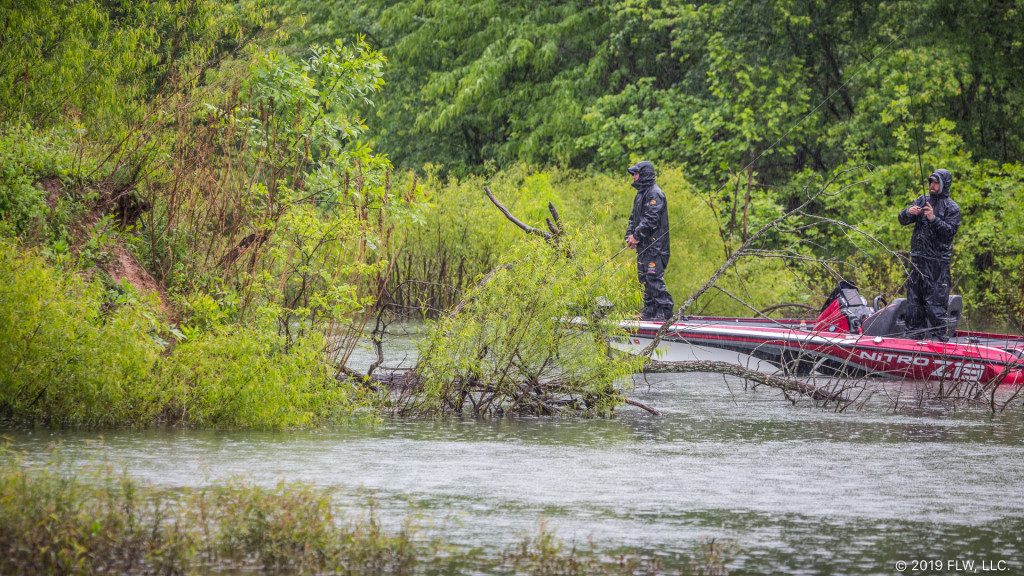 Fishing at Table Rock during the Costa FLW Series Central Division event, presented by Power-Pole, was pretty remarkable, at least until it wasn’t.

All through practice and into the early part of the tournament, all anglers talked about was how easy it was to catch fish, though most were of the 2-pound variety. Yet, as weather conditions changed (hurting many anglers’ patterns) a few pros managed to adapt better than the rest to continue catching those key 3-pounders. None did it better than winner Eric Olliverson.

This event was tight from start to finish, with Olliverson winning by a mere 4 ounces. Every remaining angler in the top 10 had a shot to win, and, in most cases, it came down to running out of fish or employing a pattern that simply dried up when it mattered most. 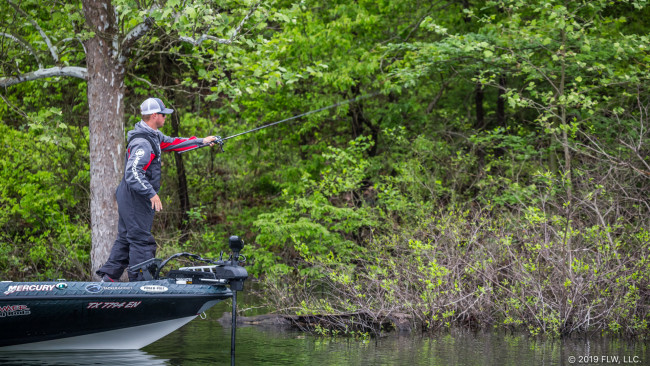 Once Dakota Ebare realized all the spawning fish he’d found in practice were gone, his pattern became quite simple.

Focusing on fishing up the James River, Ebare put a 7-foot, 6-inch Hammer Rods Elite Series Flipping Stick in his hands Thursday morning and never put it down for three days. Constantly running new water every day was key, as he simply tried to find as much flooded brush as he could.

A big key to his success was realizing exactly what he was fishing for in the brush: fry-guarders.

“Everything I was catching was males,” Ebare said. “They’re fry-guarders, so it didn’t matter what the weather did. They’re weren’t going anywhere.”

“That thing would go flying by them falling so fast, and it’d just get a reaction bite,” explains Ebare, who says he was getting 25 bites a day. 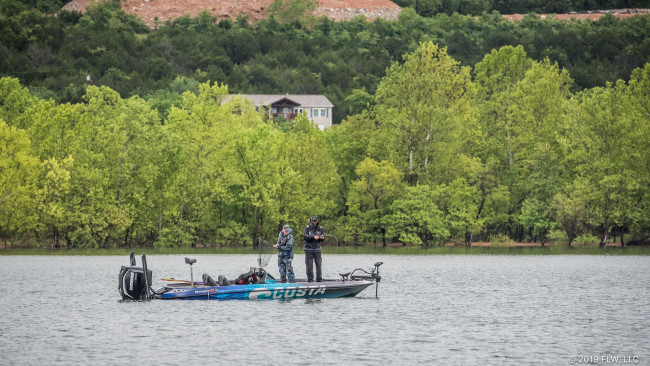 Todd Castledine is well known for his sight-fishing ability, yet the Nacogdoches, Texas, pro had no intention of wanting to sight-fish during this event. Instead, he decided to have some fun with some brown fish.

Staying on the lower end, Castledine had located some longer, shallower points right on the main lake that were loaded with baitfish and smallmouth willing to eat a Strike King Rage Swimmer or Strike King Sexy Dawg. In fact, he was fishing so far away from the bank at times he often worried about anglers who didn’t expect anyone fishing out so far running him over.

Castledine did supplement his brown fish with some green ones he caught off beds, including one he lost four times before finally netting her – “That has to be the dumbest fish in the lake,” Castledine jokes, “but I’ll take her.” Still, of the 15 fish he weighed in, only four came off beds, with the rest being smallmouth.

On the final day, Castledine said he caught more fish than he’d caught all week on the topwater. Unfortunately, despite having a quick limit, he wasn’t able to upgrade. All he got all day were small bites. 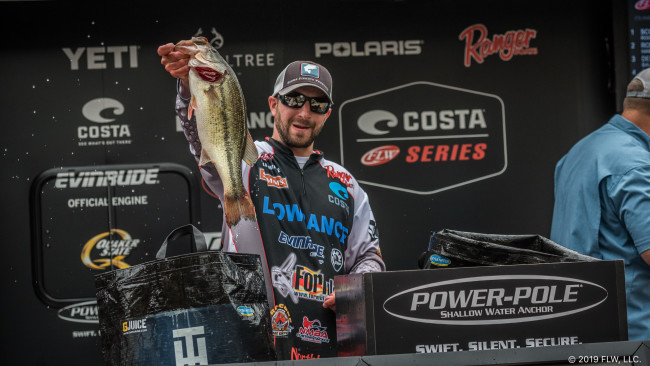 If Kyle Minke started on the pattern he ended on, he might’ve won this event.

Having only been to Table Rock once before, Minke started day one doing what everyone else was doing – fishing points with a Ned rig before chasing a few bedding fish.

Early on day two, Minke made a change.

“I wrote off everything I was doing and ran to the dirty water to pitch laydowns,” he says.

Fishing the James River, he found enough laydowns to flip with either a Bitter’s Bait Jitter Crawor Zoom Ultra-Vibe Speed Craw on a 3/0 VMC wide-gap hook and a 1/2-ounce WOO! Tungsten Weight. The result was a significant upgrade over day one, which prompted him to do some studying.

“The night after day two, I went on Google Earth and started looking for laydowns, specifically pine tree laydowns,” Minke says. “I found about 20 more areas way up the river, almost as far as Cape Fair.

“I had a great final day, but I just wish I’d been [flipping those laydowns] from day one.” 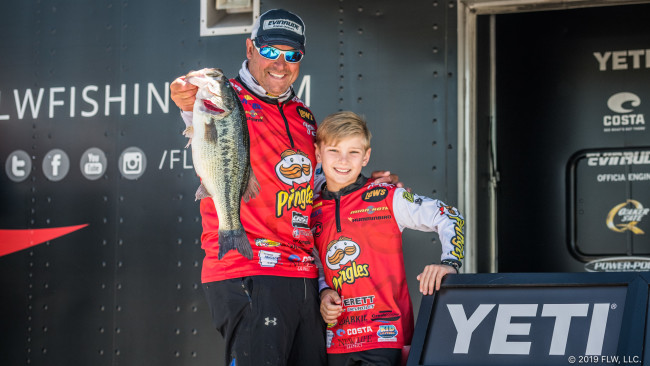 5. Bohannan hangs out in the White River

With a number of top pros spending their time up the James River, Greg Bohannan had the White River basically to himself.

“I didn’t see a tournament boat the final two days of the tournament,” says Bohannan, who figured he was making a run of about 40 miles.

Up there, it was just a matter of covering water using a two-pronged approach around flooded brush and cover.

Prong one was a wacky-rigged Strike King KVD Perfect Plastic Ocho, which he’d pitch to isolated flooded cover. It was prong two that did the bulk of his damage for bigger fish, though.

“I was Texas-rigging that Ocho weightless and skipping it up into that brush,” Bohannan says. “Then I’d actually twitch and pop it out like a Fluke. It’s just something different the fish don’t really see.”

That’s how he coaxed a 6-pound, 2-ounce kicker on day two that helped buoy his biggest bag of the event. 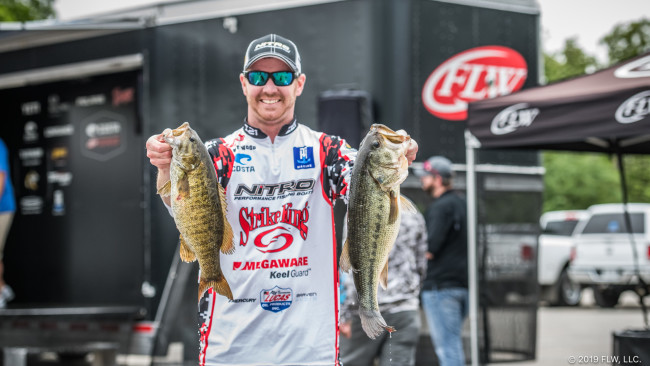 A 6-pound, 11-ounce kicker is a big fish on most lakes. On a lake like Table Rock, it’s akin to landing a 12-pounder, and with 3-pound bites coming at a premium, that one fish really sealed Matt Wood’s top 10.

Wood needed a bunch more to back it up, which he caught thanks to three points all within a couple hundred yards of one another (two of them right next two each other) on the lower end.

Wood’s shallower sister points are where he caught the majority of his weight, including his day-one giant kicker, targeting bass that were busting on shad with a Strike King Sexy Dawg. Yet, as the conditions changed, so did his baitfish’s positioning, which hurt (and eventually killed) Wood’s bite.

“On day two, the cold wind really pushed the baitfish and balled them up close to the bottom instead of higher in the water column,” Wood admits. “Day three, they were gone.”

When the fish stopped coming up, he was still able to coax some to bite tossing a Keitech Swing Impact FAT 3.3 swimbait, fishing it about 5 feet down over 15 to 25 feet of water. In fact, a big key to his success this week was being able to see and watch the fish on his Garmin Panoptix.

“If you don’t have that, you’re fishing at a disadvantage,” Wood says. “I was able to watch fish following my swimbait. If I didn’t have that, I might’ve never known there were so many fish – and big ones – on that spot.” 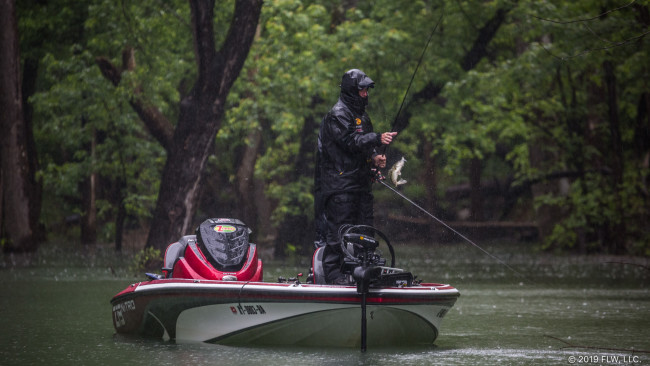 7. Morris’ streak comes to an end

It was incredible while it lasted for Jake Morris.

The McKee, Ky., pro actually led the first five days of competition in the FLW Costa Series Central Division this season, having won the first event (on Kentucky Lake) wire-to-wire and then the first two days of this event. Unfortunately, his area and bite completely died the final day, and, with it, his chance of chasing Ray Hanselman’s feat of winning all three events in a single Costa FLW Series division season.

Morris was making an hour-plus run almost as far up the James River as the McCord Bend area, which is where it can barely be considered part of Table Rock Lake.

Up there, he found three shallow pockets full of flooded brush and cover and loaded with largemouth willing to crush a Reaction Innovations Swamp Donkey hollow-bodied frog. What made the pockets unique is that two of them had 45-degree rock banks that should indicate a deep pocket, but instead they were only a few feet deep all the way across. They would have been extremely tiny (or nonexistent) if the water hadn’t been up so high.

Unfortunately, as often happens in rivers, the conditions changed. The water clarity cleared up, effectively killing his frog bite the final day. He pulled the plug at 9:30 a.m. with just one keeper and scrambled to catch three more, but that was the end of his run. 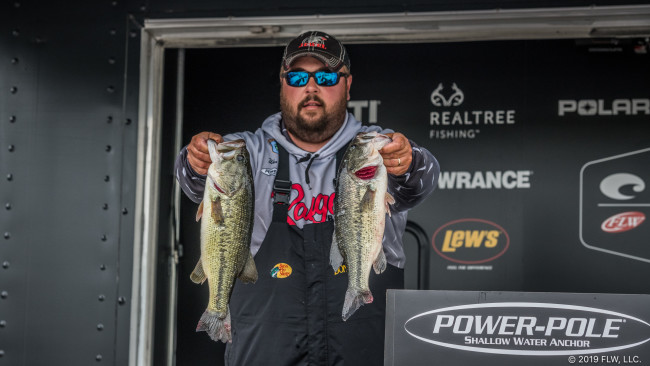 Wesley Rogers really wanted to spend his entire tournament sight-fishing, but once the weather turned bad, he pulled back and adapted.

Still, he was able to do it the majority of day one and half of day two, utilizing a Bass Pro Shops Tender Tube in green pumpkin or white with the tail died chartreuse. He threw both on a 1/4-ounce Jewel Rattlin’ Tube Head.

Once Rogers realized the conditions weren’t conducive to sight-fishing midway through Friday, he simply backed out and blind-casted the same pockets in which he’d marked bed fish.

“I did the best I could once I couldn’t sight-fish,” Rogers says. “Once it was gone, though, it killed my weight.” 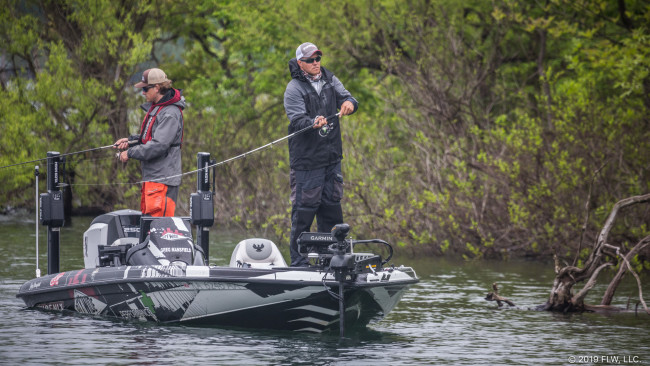 Greg Mansfield really couldn’t believe what was happening in practice.

That left a lot of options open for him, though he knew exactly how he was going to catch them, be it fish sitting on the ends of points or bedding fish: finesse tactics.

“On points, I used a Ned rig and a shaky head,” says Mansfield, who spent his tournament running water between Indian Point and the mouth of the James River. “A big key for me was a Neko-rigged Yamamoto Senko, especially on those bedding smallmouth. You couldn’t see them, but I know that’s what they were doing.”

Mansfield threw the green-pumpkin Senko with a 1/16-ounce weight and on a 1/0 Owner Cover Shot Worm Hook. He also mixed in shad-colored Senkos, which he wacky-rigged with a weighted hook. 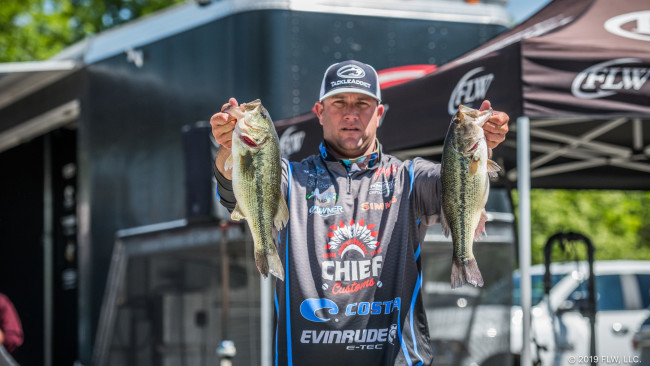 Jason Bonds loves to sight-fish, but he has to adjust how he does it when he comes to lakes like Table Rock, compared to back home in Texas.

“I have to downsize my baits,” Bonds explains. “That’s why I threw that smaller Strike King KVD Perfect Plastic Baby Rodent. The bigger one is a little too much for them to get in their mouths, especially the spots.”

His two main colors were green pumpkin and California 420, and he executed his pattern in the mid-lake region, up to about where the rivers fork.

However, as the conditions worsened – both weather-wise and in regards to water clarity – his weights continually dropped.

“I just couldn’t see the fish and was just fishing where I’d marked them,” Bonds admits. “I figured I’d commit to it the final day regardless, because I couldn’t do any worse than 10th.”