Olson Out in Front at Clear Lake 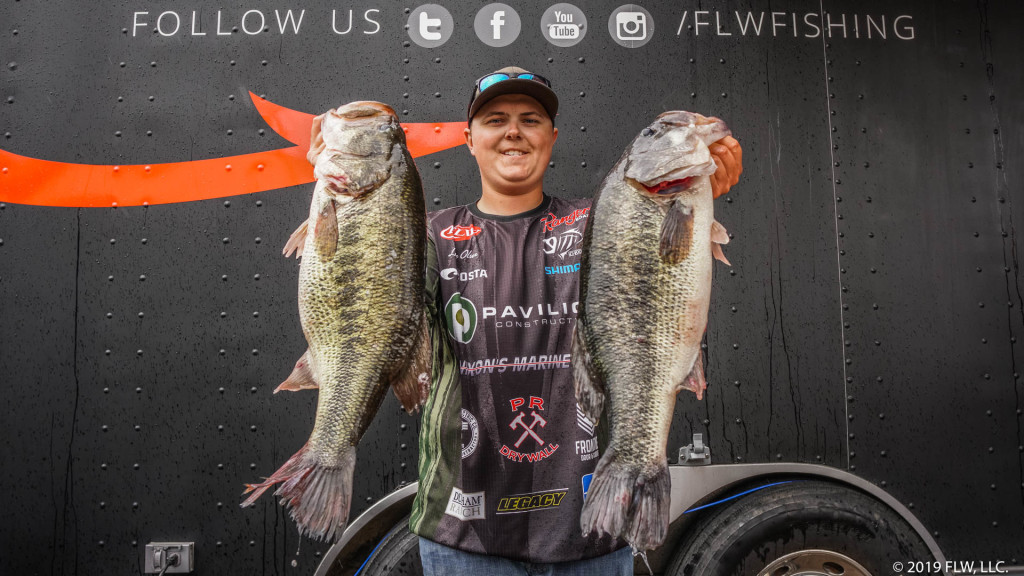 Lane Olson’s morning began with a productive tone, but it was that rare instance of double lightning strikes that propelled him to a leading weight of 25 pounds on day one of the Costa FLW Series Western Division event, which is presented by Ranger Boats and hosted by Konocti Vista Casino Resort & Marina.

Fishing protected pockets in the south end of the lake, the Forest Grove, Ore., pro quickly put five keepers in the boat and then started methodically seeking upgrades. It’s said luck occurs when opportunity meets preparation, and Olson fulfilled his end of the deal.

Notably, Olson’s second kicker is tied for big bass with a fish of the same weight caught by second-place Joe Uribe Jr., who trails the lead by 2-8.

Olson says he attributes his nearly back-to-back big-fish catches to location. The docks he fished were likely to see big bass coming and going.

“That was a major spawning cove,” Olson says. “I caught that first big one coming out, and that bigger one was coming in.”

Olson says he fished a mix of docks, rocky shoreline and some offshore spots. His game plan centered on a highly mobile strategy.

“I really ran around today; I burned almost a whole tank of fuel today,” he says. “I ran a lot of water and fished it really fast.

“The docks with the wooden posts have been the key. You can catch some on metal docks, but the bigger ones have been on wood. I’m really not sure why. They just seem to relate better to them.”

Olson kept the details of his bait selection confidential, but he says that finesse rigs caught all of the shoreline fish, while a soft plastic picked up one of his weigh fish over deep rocks.

“I really didn’t change anything,” he says. “I’ve been practicing since Saturday, and I’ve been doing the same thing all week. I didn’t even practice yesterday because I didn’t want the weather to mess with my head. I just went out today and went fishing.”

Jesse Parks of Avondale, Ariz., leads the co-angler field after catching a limit worth 17 pounds, 13 ounces on day one. Hanging on to the first-place spot will be a challenge, however, as five other anglers all are within a pound of Parks going into Friday's second round.

Editor's note: It was originally reported that Tara Borofka was the leading co-angler after Thursday's weigh-in. Borofka's unofficial weight was 18 pounds, 4 ounces. However, she was later penalized for bringing six fish to weigh-in, and her weight was docked by 2 pounds. Jesse Parks is the official co-angler leader. Borofka is in sixth. The change in standings was not made until sometime Friday. We apologize for the mistake.