Uribe in Charge on Clear Lake 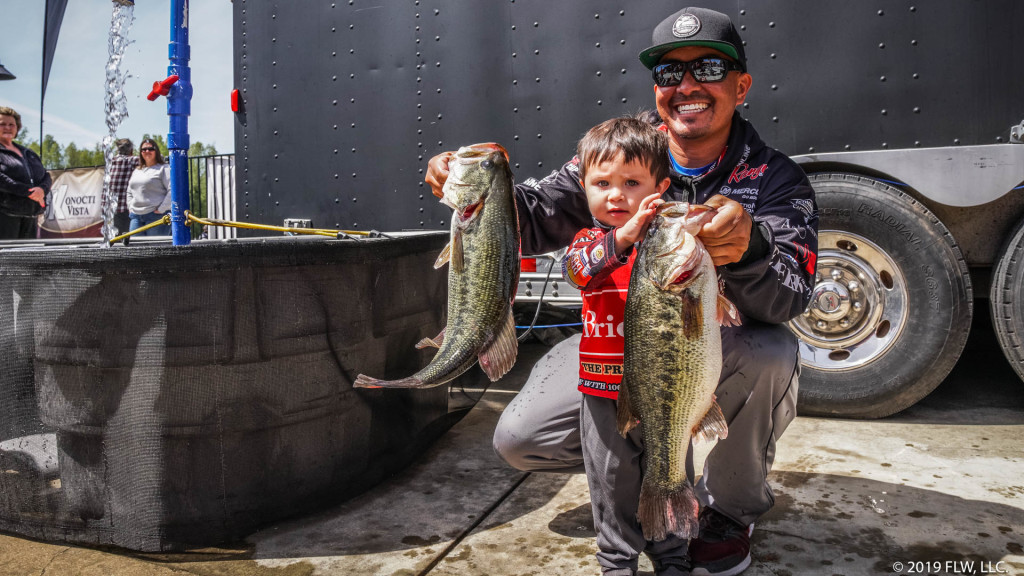 When weather woes nixed Joe Uribe Jr.’s initial objective, the resilient angler from Surprise, Ariz., refocused his effort and sacked up a limit of 19 pounds, 5 ounces to take over the lead on day two of the Costa FLW Series Western Division event presented by Ranger Boats and hosted by Konocti Vista Casino Resort & Marina with a total weight of 41-13.

After placing second on day one with 22-8, Uribe had planned on returning to his spot in the lake’s north end. A stiff northwest wind convinced him otherwise.

“The wind really blew into the area I’d fished yesterday, so rather than battle it, I went farther south and fished the lee side of the lake,” Uribe says. “These fish are still spawning down south. The water temperature dropped to about 66, whereas it was in the low- to mid-70s in practice so the fish moved into the tules.

“Yesterday, we caught fish out deeper, but today we went in tight. My co-angler caught one on a spinnerbait right up on the bank and that triggered me that maybe these fish moved up.”

A drop-shot rigged with a 6-inch Roboworm in the margarita mutilator color produced all of Uribe’s day-two fish. 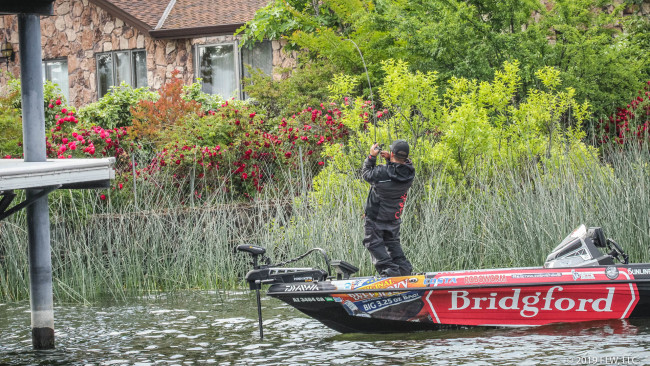 “This is slow and tedious and very hard for me to do because I like to chunk and wind, but I just had to hunker down and go through numbers,” Uribe says. “I caught 40 fish each day and went through a lot of Roboworms.”

Uribe says he focused on tule pockets and made precise pitches into the holes in the vegetation. Doing so required technique-specific tackle.

“I’m using only a 1/4-ounce weight, but I’m using a baitcaster — a 7-2 medium custom Performance Tackle drop-shot rod,” Uribe says. “This allows me to shoot that drop-shot into those pockets. I’m using a Daiwa Tatula SV reel, which is very free-spooling.

“I’m also throwing 20-pound Sunline braid with a 20-pound fluorocarbon leader. Using straight fluorocarbon you get too much stretch, but with the braid I can control the line better; I can lay it in the tules and work the fish out.”

“I fished clean today,” he says. “Yesterday, I had two mishaps but I made up for it today.”

Uribe had a small limit by mid-morning, but surged ahead when the sun emerged and warmed the day.

“As the clouds lifted and the sun came out, you could really see those pockets better,” he says. “In the morning, I was catching the smaller males, but I went back to some of those same areas later in the day and those females had moved in.

“It was very important for me to get the boat in as tight as I could and get into those tules. Nobody around us was fishing like that and I think that was the key.” 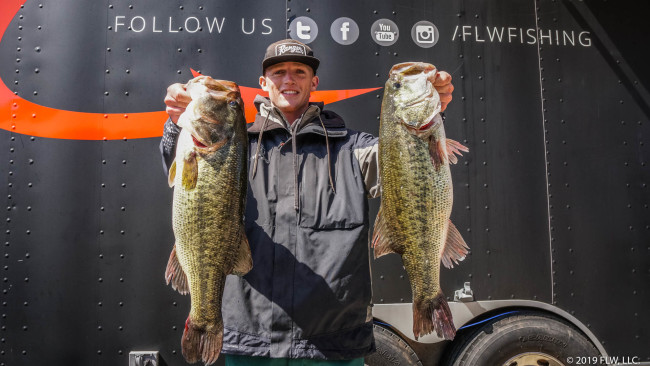 He’s the youngest angler in the tournament, but catching the second-heaviest bag of the entire field — 23-15 — moved Logan Huntze into the co-angler lead with 41-5. After placing third on day one with 17-6, the Discovery Bay, Calif., co-angler carries a lead of 6-7 into tomorrow’s final round.

“The day started off kind of slow, but around 11, I got myself situated, flipped back out there and within 10 minutes, I caught the second big one,” Huntze says. “I kept culling throughout the day. I didn’t catch a lot of fish, but I caught the right ones.”

Huntze caught his fish by flipping and pitching Texas-rigged craw baits around docks, fishing a drop-shot with a margarita mutilator colored Roboworm around tules and mixing in some [Yamamoto] Senkos and Alabama rigs.

“I was just going off what my pro did and I adapted to him,” Huntze says. “I’m fishing slow, but making as many presentations as I can.”