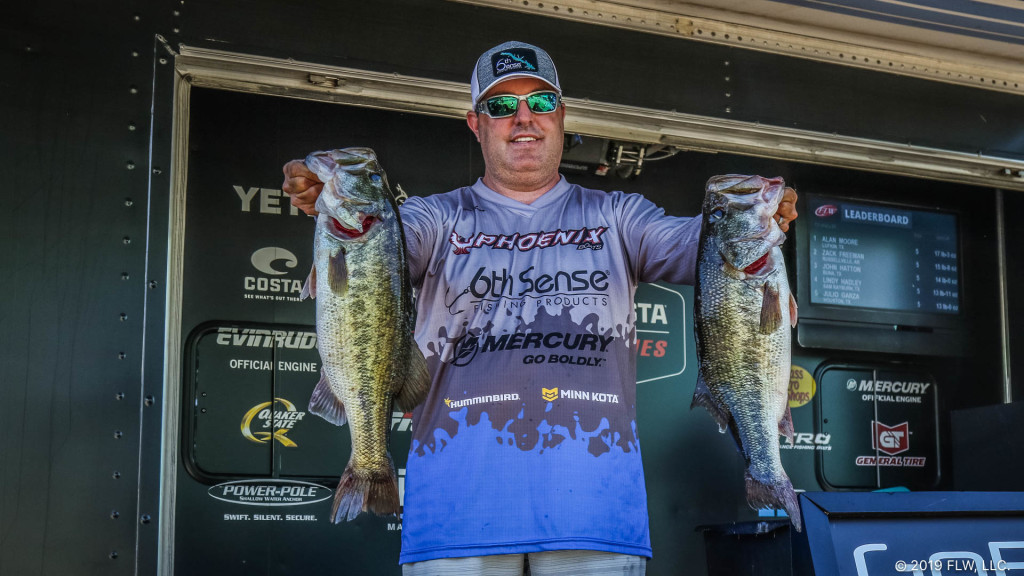 Sam Rayburn was a little stingy with its biggest bass on day one of the Costa FLW Series Southwestern Division event, which is presented by Mercury, but that didn’t stop Texas’ own Kris Wilson from putting together the kind of heavyweight limit that Big Sam is known for.

Wilson, who hails from Montgomery, Texas, weighed in 26 pounds, 11 ounces to take the early lead. Josh Bensema was the only other pro to break 20 pounds, but he’s still well behind with 20-4.

Typically in June, tournaments at Sam Rayburn are offshore affairs, where competitors crowd onto the best deep-water structure. This week’s event is shaping up a little differently. High, murky water has had the bass hung up in the shallows, but now that the water level is starting to fall, the bass are beginning to show up on their offshore spots in better numbers.

Most of the pros targeting shallow brush today caught a lot of fish but still reported a slower bite than in practice. Meanwhile, several of the top five pros are fishing a combination of in and out, taking advantage of both opportunities to try and find 4-pound-plus bites that, for everyone but Wilson, have been really tough to come by.

Wilson is employing somewhat of a combo game plan, though he is favoring the offshore bite. He didn’t catch any of the 7-pound and heavier bass that Rayburn can produce, but he didn’t need to. Landing five cookie-cutter bass of at least 5 pounds has him in a great position going into cut day.

The action began early, when Wilson caught a limit from his starting spot and culled to get over the 20-pound mark.

“I left there with two 2 1/2-pounders, and I ended up, later in the day, about 1 o’clock, I pulled up to another spot and caught two more big ones,” Wilson says. “I put my rod in the rod box and drove my co-angler around.

“I did go up and flip some bushes today, but it seems like the flipping bite for me is going away and the offshore deal is coming on, so that’s what I’m focusing on.”

Wilson’s co-angler, Michael Bates, weighed in an impressive 14-14 stringer and is in third place on the amateur side, which supports the pro’s theory that the offshore bite is heating up. As Wilson puts it, he’s focusing on fish coming to him, rather than fish going away from him.

“I have about five key areas where I know big ones are around, so I’m just kind of rotating through those,” he adds. “I have a few other spots I’m hitting, catching a few fish. I have one spot that I didn’t hit, and I think I saved some, but we’ll see tomorrow.” 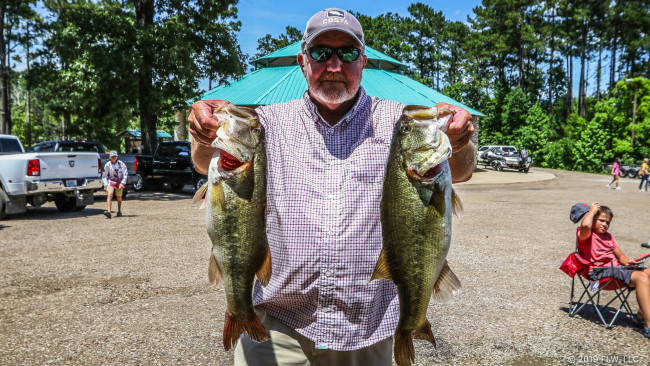 Fishing with second-place pro Josh Bensema today, Alan Moore of Lufkin, Texas, caught one of the opening round's best limits by any angler. His 17-pound, 13-ounce limit has Moore at the top of the co-angler leaderboard and almost 2 pounds ahead of second place. Moore is looking for his second top-10 finish with FLW. His last one came in a 2007 Costa FLW Series event right here on Sam Rayburn.