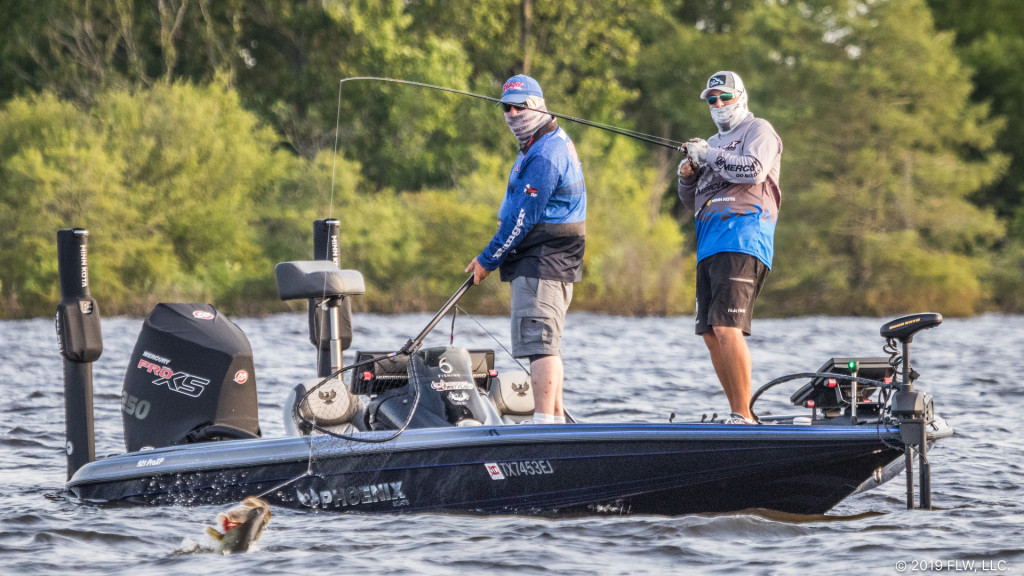 In terms of fish caught, tournament leader Kris Wilson had a tougher morning today than on day one. But a behemoth bass that will probably push the 8-pound mark has him in prime position to maintain his lead in the Costa FLW Series Southwestern Division event presented by Mercury on Sam Rayburn Reservoir.

Wilson began his day in the same place as yesterday, but his bites were less frequent. The first three in the box were small keepers. Then the kicker bit and changed everything. Wilson leaned into the hawg, fought it up on one side of the boat, then around the bow, and after a couple of failed attempts by his co-angler to net the bass, the pro was able to guide it in. It’s very likely the biggest bass caught so far in the tournament.

The leader is fishing offshore, and he has more company out there today than yesterday, not just from other competitors, but from locals and anglers practicing for other tournaments this weekend. The word is out that the big girls are starting to move to their offshore haunts as Sam Rayburn’s water continues to be drawn out of the bushes.

Keith Combs, who opened the tournament in fourth, is also fishing offshore. Unlike Wilson, who spent a few hours on his starting spot, Combs bounced around to a bunch of areas this morning, bombing a crankbait on every stop. We never pulled in tight enough to get his weight estimate, but Combs flashed a thumbs up. So he's probably in good shape to make the cut. Fellow local favorite Todd Castledine also has a small limit that he caught cranking offshore.

Another top-five angler, Jake Ormond is running his deep-and-shallow combo pattern this morning with good success. When we left him, he was just finishing culling up to about 13 or 14 pounds.

The reports from the rest of the pros surveyed today varied. A few struggled to catch keepers. Others could catch all the 2-pounders they wanted.

Colby Miller might’ve enjoyed the most action of anyone we came across. He’s been working over a school of bass on a roadbed using a worm and crankbait. Miller found the fish in practice when they came up busting on the surface, and he stuck about six in a row at one point today. He’s probably on pace to have another 15-plus-pound day like yesterday.

Sam Rayburn is definitely in transition. Mother Nature is throwing a few curveballs, too. A southerly wind has the main lake roiled up. Pro Brian Robison said he had a rough and wet ride up to his area south of Cassels-Boykin. Others who were fishing offshore were very thankful for their Minn Kota Ultrex trolling motors to be able to hold in the chop.

Making the cut today will come down to making the right adjustments and staying focused so when that big bass bites, whether up in the bushes or out on a drop, the pro can get her in the boat.

Today’s weigh-in will air live at 2 p.m. CT from Umphrey Family Pavilion. It’s cut day, and only 10 pros and 10 co-anglers will survive to fish on Saturday.