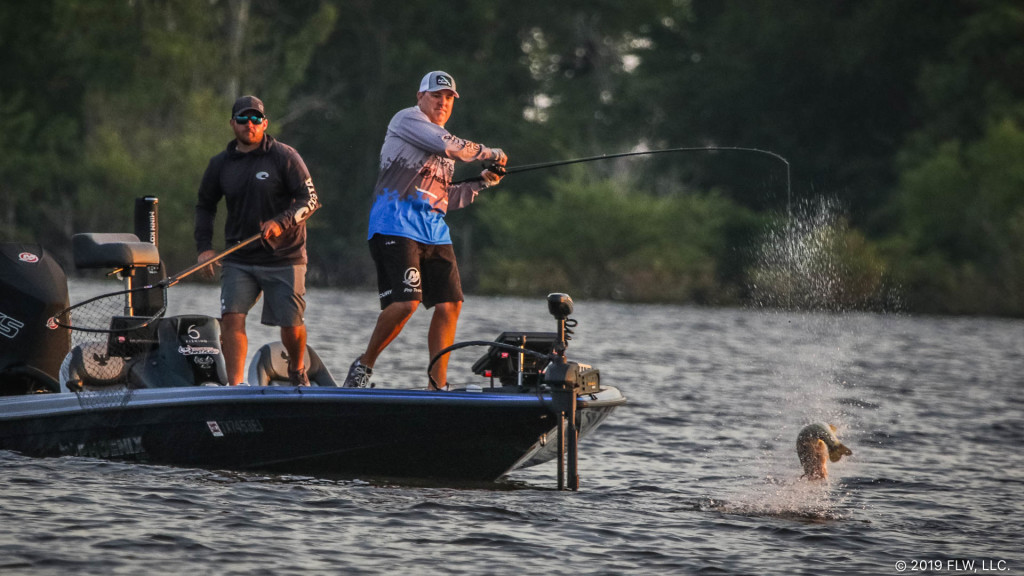 Kris Wilson did everything he could this morning to put away this tournament before anyone had a chance to make a run at him. The Montgomery, Texas, pro returned to the spot where he started the first two days and boxed up a pair of 5-pounders. The leader has camped on his spot basically all morning, and now we estimate he's culled up to about 18 pounds.

Wilson came into today with a lead of more than 4 1/2 pounds over second-place pro Josh Bensema, and a much greater margin over everyone else, so that limit is huge and likely has him on course for a wire-to-wire victory in the Costa FLW Series Southwestern Division event presented by Mercury on Sam Rayburn Reservoir.

Bensema, meanwhile, was surprised and disappointed with what he found on his starting spot near Needmore Point. Rather than setting up in a group like yesterday, the bass were spread out. He tried to get them to fire with several baits but managed only to lose a small keeper and land a non-keeper.

Bensema ran up the lake to the Mud Creek area and caught a small limit. Though, even after culling, he only has about 9 pounds.

Third-place pro Cory Rambo pulled the plug on his primary frogging spot in the back of Veach Basin at about 8 a.m. because the wind was blowing right into his best water, which he says hurt his bite. At that point, he had a small limit in the box. We followed Rambo to Coleman and watched him catch a few small keepers while flipping. Overall, he seemed disappointed in his day as well.

Louisiana’s Cole Moore enjoyed a fast-and-furious morning while flipping and frogging a stretch of bushes in Buck Bay. Moore, who has probably the most impressive hookset we’ve witnessed in this tournament, broke off a good one that hammered his frog early this morning. After that, he assembled a small limit and has been culling by small amounts since. He probably had 12 or 13 pounds when we left him.

Dicky Newberry, a local favorite, has a 4-pounder in his 12-pound limit. Eric Wright has a small limit.

That's it for the midday updates. Now get ready to watch the weigh-in live at 2 p.m. CT from the Umphrey Family Pavilion.