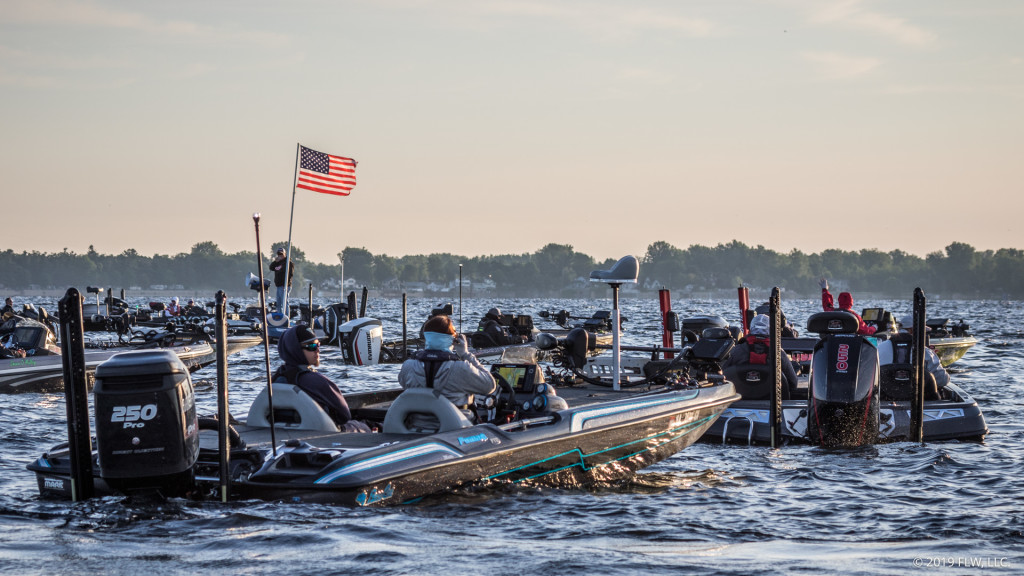 Each of the last three years have seen the Costa FLW Series Northern Division presented by Gajo Baits kick off on Champlain. This tournament, which is presented by Polaris, should offer great fishing like usual, but the dominant pattern certainly won’t be spawning smallmouths. Instead, it could be a largemouth slugfest, as the fishing has continued to prove strong on the south end of the lake. 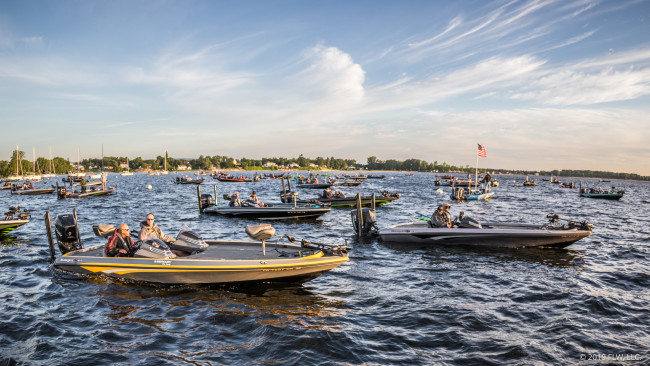 At about 100 miles long, Champlain is a large body of water with a reputation for great fishing for brown and green bass alike – and plenty of wind.

The south end of the lake around Ticonderoga (also known as “Ti”) is narrow and mostly shallow. The water is dirtier, and there are big grass beds nearly everywhere. Most of the grass is Eurasian milfoil, but there’s a wide variety of species present. Though some big smallmouths live in the south end, they’re almost never a factor in the summertime. Recent years haven’t been kind to anglers who ran to Ti, but last month’s FLW Tour event was won there, and seven of the top 10 pros fished there, so Ti seems to be back to full strength once again.

The midsection of the lake is deep and clear with some grass. It’s primarily rocky and is almost exclusively home to smallmouths and coldwater species that live in the main basin (the lake is more than 400 feet deep in the middle in some areas). The main lake is heavily influenced by wind and usually only factors into tournaments in the spring, when cooler water there delays the smallmouth spawn.

The north end of the lake is broad and clear and has a healthy mix of weeds, rock, and smallmouths and largemouths. Because of the number of islands and bays, the area is a little more manageable in the wind, and there is more shallow water to fish. The Missisquoi River flows into the lake in the northeast corner, and the area around it is dirtier and grassier than the rest of the region. Unlike the south end (where largemouths are the sole target) winning limits of both species can be found within minutes of each other up north. 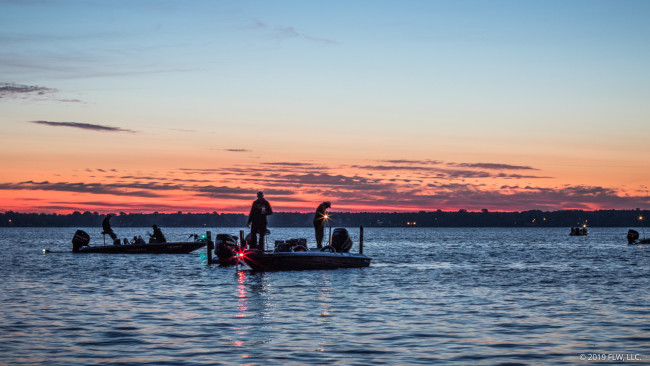 Because Champlain is so big, there are always a few different sets of conditions possible at any given time. This year, because of the high water from the spring, things are moved around a bit, but Champlain isn’t that far out of character. Up north, the fish are mostly postspawn and transitioning into summer patterns. Down south, the largemouths are doing their typical summer thing, albeit not in the exact same places as normal.

One of the most optimistic pros in the field, Kurt Mitchell, is as hyped as he’s ever been to make the run to Ti.

“I went down to Ti, and I started catching them pretty much immediately,” says Mitchell of his practice. “The grass looks really good – it’s not too thick, so you can throw a swim jig in there, and flipping is pretty easy. It’s tall enough where you can see what to flip, but not so thick that you’re just blindly flipping in it.

“If we can make it there all three days, it’s going to be dominated by Ti,” he adds. “I found three different schools in the mats that are just incredible. I went to one mat and I set the hook and the first one was a 3-pounder, and I had 12 consecutive casts after that I got blown up on and I shook them off. You don’t find that anywhere else in the world. It’s just crazy what’s going on down there now.”

Some of the folks fishing up north have definite interest in Ti but think they’re still better off closer to takeoff. Jimmy Kennedy is one of them, and he’s planning on fishing almost entirely for smallmouths.

“It’s definitely in some type of transition,” says Kennedy of the north end. “It’s a few weeks behind, and I know there are still a few fish on beds. But I’m looking for fish deep – I’m going to try to rush the summer pattern a little bit for some good smallmouths. I found a few schools of largemouth that are setting up on a summer pattern too, but I don’t know how many other people found them too.

“I’m tempted to run, but I plan on staying north. There’s good largemouth up here, and I’ve got a lot of good smallie spots that could be turning on. I think the south is fishing really well right now; the Tour cracked them, and then it seemed to slow down a bit, but Ti is back on now.”

Ron Nelson has won the last two FLW Series tilts on Champlain with mostly spawning smallmouths. Though that’s not a factor this week, he’s committed to fishing north again.

“The water has come down and stabilized out,” says Nelson, who finished 14th in the Tour finale last month. “The fish are healthier and fighting hard now, getting strong. The smallmouth are definitely getting some shoulders back on them finally. They aren’t real grouped up now, but they’re starting to get out on structure.

“I spent some time looking for largemouth up north, but I haven’t really found them yet,” says the reigning FLW Tour Polaris Rookie of the Year. “I found some places where you could catch 30 or 40 fish, but they’re mostly all small. I’m not catching 3 1/2 or 3 3/4 largemouths, I’m just not. They seem to be missing from the top of the lake, and I don’t really know why. For smallmouth, I think that midrange, maybe 6-to-13-feet deep is the prime range. It depends on where you’re at and time of day, but you can get some of those bigger smallmouth without going too deep.” 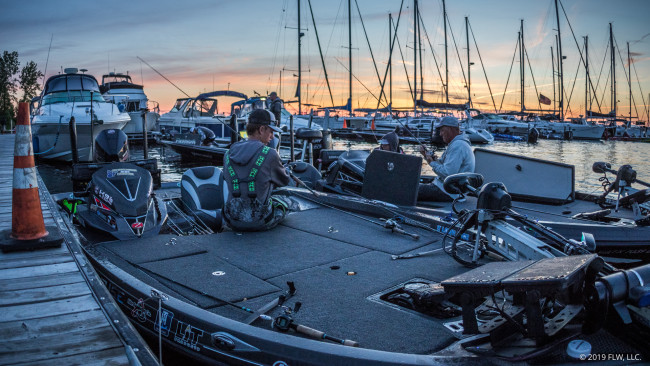 Champlain is famous for the options it provides, so anglers will be able to put a lot of rods on the deck if they want to.

For folks running to Ti, grass-type baits will dominate. Flipping baits, vibrating jigs and frogs will be abundant. There are also sure to be some fish caught off hard cover down south, and crankbaits will get the call for that.

Up north, there’s a lot more mystery. Carolina rigs are always good for the smallmouths in the summer, and the usual finesse offerings are going to catch bass. Depending on the weather, a spy bait might make some waves as well. One fun possibility that seems to have gained some traction in practice is a big walking topwater. If you’re hunting largemouth up north, the best bets are usually a stick bait or something to flip. 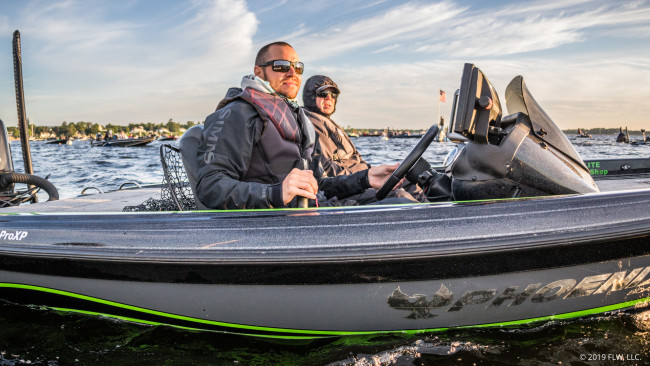 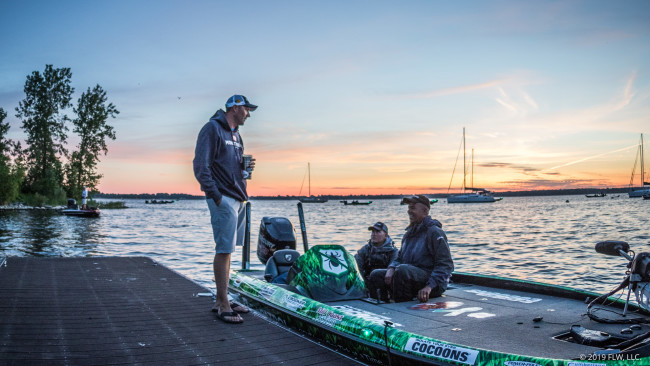 Weight predictions are all over the board for this tournament, though that’s relative to Champlain, which usually features packed weights. If the weather is perfect, it could set up for someone to break 60 pounds, but that’s probably a bit unrealistic.

“I think a mixed bag will win, and I think you’re gonna have to have a milk run,” says Vermont pro Cole Harris. “Just from what I’ve seen and caught, I think there’s gonna be a lot of 15-pound bags, and I think 17 or 19 will be up top. I think it will drop off kind of fast, though, and there will be a lot of 15- or 16-pound bags.”

“I think it’s going to be close to 60 pounds,” says Kennedy. “Somebody is going to catch them really good; I wouldn’t be surprised if someone catches 20, 20 and 18. But, I’ve heard a lot of guys saying 17 pounds a day will make the cut, so maybe it won’t be that good.”

Nelson figures on a high-weight tournament as well.

“Consistency is going to be the main deal for making the top 10,” says the Michigan pro. “If you can catch 17 3/4 or 18 pounds a day, you’ll make the top 10. I think somebody is going to bang out a big bag of 22 or 23 pounds one day, though. For the smallmouth, there should be a handful of guys that can catch 18 pounds a day, but you might have to leave those areas to try to catch a 5- or 6-pound largemouth.”