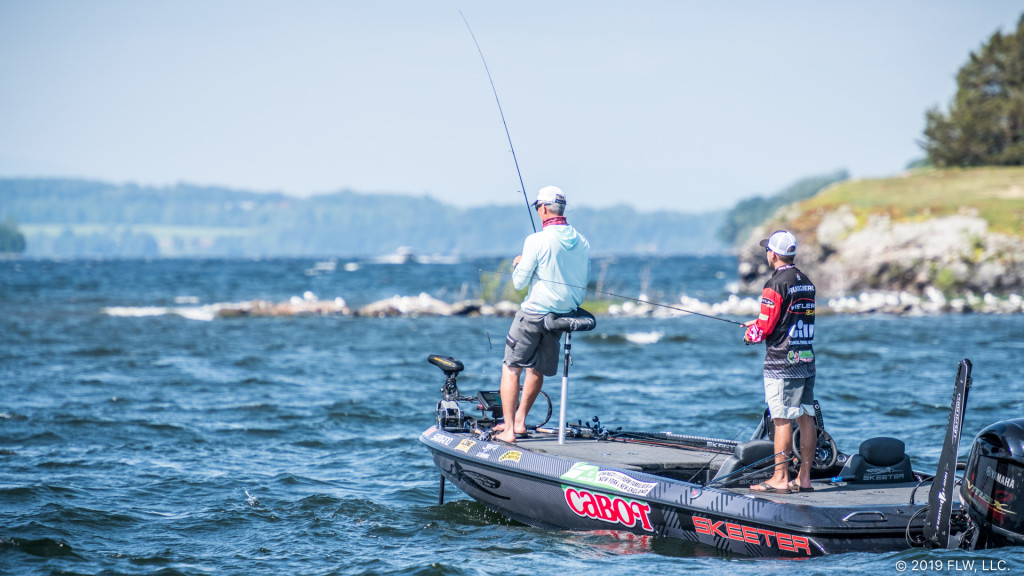 Day two of the Costa FLW Series event presented by Polaris on Lake Champlain is going to be quite a swing from day one. Typically turnover in the standings is common on Champlain because the weights stay so tight, but today’s turnover is going to have a lot to do with the weather.

The pros took off in pretty windy conditions and it really hasn’t let up all day. That wind is for sure going to change some things – the run to Ticonderoga is going to be a doozy for folks that attempt it, and there are plenty of places up north that are borderline unfishable.

Starting out in first place, Bryan Thrift got rolling quickly with a small limit, but hadn’t upgraded at all by 8:30 a.m. He was catching a ton of fish, but not as many largemouths as he was on the first day, and his primary flat is pretty windblown.

Elsewhere, a lot of pros are struggling to keep up the pace from day one. Starting in second, Brandt Tumberg only had about 13 pounds late in the morning. Jimmy Kennedy was having a similarly tough day, with just a 13-pound limit to his name mid-morning as well. Wayne Vaughan also was going slow, and only limited out around 10 o’clock, though he culled up to around 12 pounds or so with a good one shortly after. JJ Judd had a startling zero bass around 11:30.

Of the top pros we saw, Scott Dobson is probably doing the best. He’s around a lot of fish and had three good ones and two little ones around 10:30. Assuming he can convert followers into biters, he should have a really good chance to replicate his strong start.

Elsewhere, Troy Garrison has a limit for 12 pounds and a lot of pros are working on partial limits. Moo Bae has just two. Robert Clyse and James Schulz have just four. However, it isn’t all doom and gloom – Dakota Ebare had 16 pounds in the boat before many pros had stopped running.

Weigh-in today is going to be interesting for sure, and making the cut to fish tomorrow is far from a sure thing for anyone. It starts at 2 p.m. ET, and you can watch it live online or come out to the Plattsburgh City Marina to see for yourself.