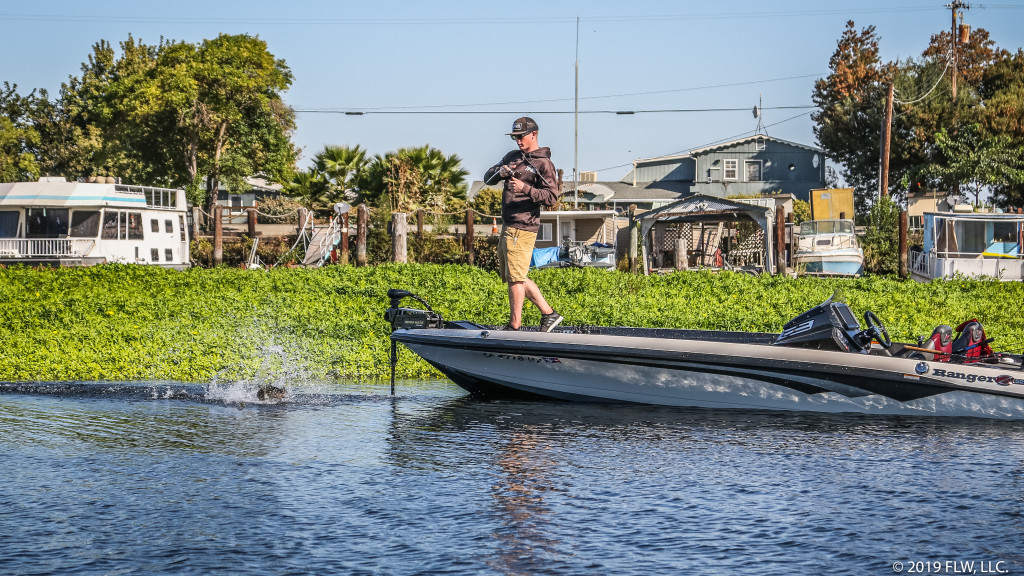 The predominant factor on day one Costa FLW Series Western Division event presented by Power-Pole on the California Delta has been the wind. With a cool front expected on Friday, a gusty wind has been building all morning making the fishing considerably more difficult than it was supposed to be.

Overall, the fishing doesn’t seem to be quite what some folks hoped for based on practice.

When we found Bryant Smith on an East Delta rip rap bank around 11 a.m., he had a limit of about 11 pounds. Smith was punching mats and reported that the wind was making it increasingly difficult to control his boat.

When we found Ken Mah this morning, he was alternating between a buzzbait and punching. He was in a mostly protected area, but a little wind on one of his tule points contributed to a keeper on the buzzbait.

Mah expressed concern after he caught a small keeper on one of his prime punching mats. He said he had visited this particular area specifically to fish that one mat, but catching a small fish where he had found big ones in practice had him wondering if the fish had repositioned — perhaps deeper into the mat in anticipation of the approaching cold front.

Limits were scarce during the first half of the day, but we saw a couple. Andy Scholz had five for about 12 pounds by 9 a.m., Chris Costello had a similar bag, as did Todd Kline. Anglers were mixing up their presentations between bladed jigs, crankbaits, topwaters, drop-shots and punch rigs. Tule berms and hyacinth mats were getting plenty of attention, but anglers were also working troughs and isolated vegetation patches off the bank.

Notwithstanding the conditions, this is still the California Delta, so we weren’t surprised to see several quality fish. Costello showed us a 6-pounder he caught on a reaction bait, while Logan Huntze held up a 6 of his own that he caught punching.

Notably, co-anglers also experienced some Delta love with a couple of nice ones caught off the back of the boat. Casey Dunn punched up a 5-pounder, while Kevin Gross employed a drop-shot to catch a limit that included a 3 1/2.

We never found plenty of notable anglers, so there’s still a lot of mystery to be revealed at weigh-in. You can watch online, or come out in-person to Russo’s Marina at 3 p.m. PT.