Five other pros cross the 20-pound barrier on day one 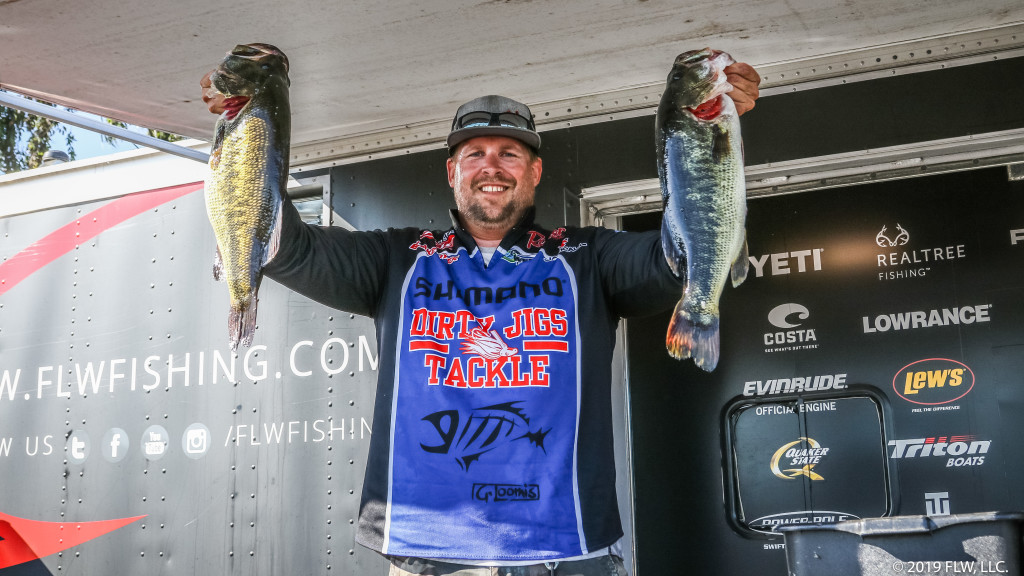 Though there’s some cooler weather on the way tomorrow, the bite was hot for day one of the Costa FLW Series Western Division event on the Californian Delta. Leading with 27 pounds, 3 ounces, Blake Dyer staked himself a 1-11 lead to kick off the tournament, which is presented by Power-Pole. In second, Jason Borofka wrangled up 25-8, and four other pros managed to get over the 20-pound barrier behind him. Additionally, a number of 8-pounders hit the scale, with the biggest being an 8-13 “gordita” courtesy of the one and only Mark Daniels Jr.

With the wind picking up throughout the day and making the fishing tougher, Dyer did his damage early.

“I had what I had by about 9:45 in the morning,” the Walnut Creek, Calif., angler says. “On the first stretch I went to, I caught two big ones. I think the biggest one was close to 7 and then another one over 5.

Dyer says he located his main area on the final day of practice. During clear, calm conditions, he spotted several large fish cruising the shallows and he observed an abundance of baitfish swimming in healthy grass.

“I figured I’d make that my first spot,” Dyer says. “There were no boats around and, sure enough, I had two big ones in the boat in the first couple of minutes.”

Dyer says that in addition to the attractive cover and plentiful food sources, location proved essential to his spots’ productivity.

“I stayed near the current; not right in it, but where the spot is just out of it enough,” he says. “Also, there were a lot of bluegill and little bass in this area. For as healthy as it looked, I figured the big ones had to be around. So, when I saw those big ones cruising in practice, I said ‘That’s where I’m going. That’s what I’m doing.’”

Dyer says he caught all of his weigh fish by punching the grass. Matching the bluegill was his intention, so he used a green pumpkin Reaction Innovations Spicy Beaver. Persistence, Dyer says, played a big role in his productivity.

Given the day’s windy conditions, some of which, Dyer faced during his early rallies, a heavy punch weight was the key.

“I was using a 1¼-ounce weight in practice, but I knew it was going to blow,” he says. “When it blows around that stuff, the wind packs it in tight, so I went up a little bit to a 1½-ounce and I was getting through perfectly. If you can’t get in there, you can’t catch them.” 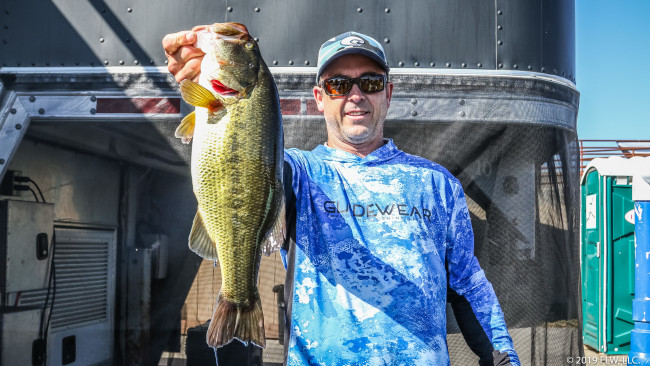 Bryan Lutz of Clearlake Oaks, Calif., caught a 5-bass limit that weighed 15-3 to take the lead in the co-angler division.

“I pretty much caught them all on one bait and my pro, Nick Nourot (fourth place), did a good job of putting us where the fish were and made it easy for me,” he says.

Although he kept his bait selection under wraps, Lutz confirmed that a single offering delivered all of his fish. He caught his fish around wood and found that making contact triggered bites.

“Delta bass, to me, always seem like they’re super aggressive,” Lutz says. “If you put that bait in front of they’ll eat it.”

Lutz was thin on the details, but he points to diligence as the most important element of his performance. The day's tide schedule — mostly outgoing to low — plus big winds, created a challenging scenario, but grinding through the obstacles led him to a favorable outcome.

“It was tough and we just had to keep on plugging away, and it paid off,” he says.