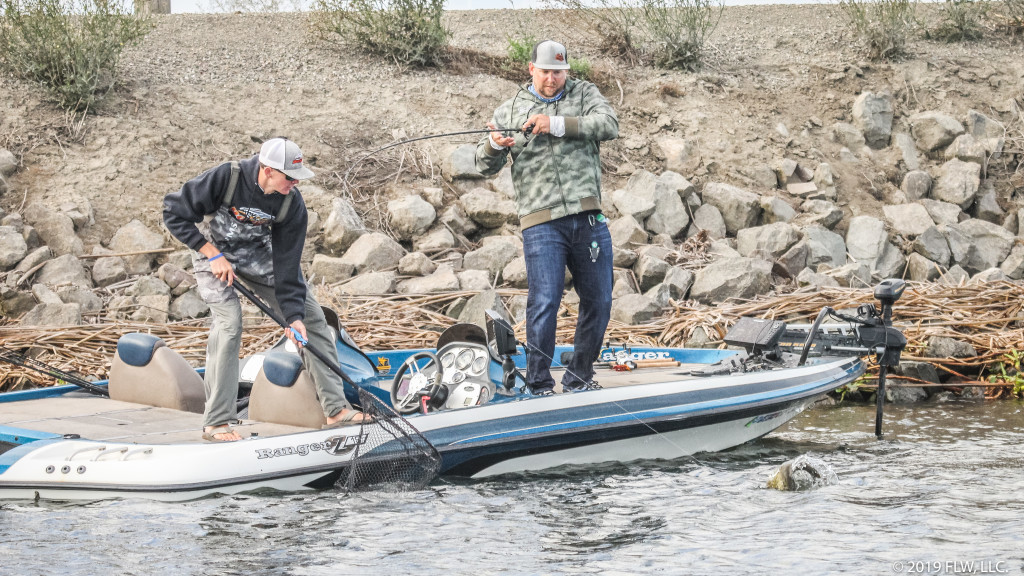 Tournament fishing is full of highs and lows and today, the latter may play a key role in determining the outcome of the Costa FLW Series Western Division event resented by Power-Pole on the California Delta. Specifically, several anglers expressed their hopes of doing their best work during the afternoon low tide period.

Low water makes two things happen: It pulls fish to the edges of weed mats for more efficient pitching/punching and it makes submerged grass more visible. In particular, it’s the holes in the grass and the isolated clumps that anglers need to see for effective targeting.

The tournament has seen mostly outgoing to low tide stages for two days, but tides advance about an hour each day, so anglers hinging their strategies on the low-water window have had to struggle through slower starts. Today’s tide bottomed out around noon and we saw and heard from several anglers who were anticipating better results in the lower water.

Among them was Jason Borofka, the Salinas, Calif., pro, who placed second on day one with 25-8 and entered the final round in third. When we visited him mid-morning, he had only three small keepers, but anticipated greater opportunity after the fall.

Same for second-place pro Austin Wilson. He had a limit that went about 12 pounds at 11:30, but says he was looking to do better in the low water

Fifth-place pro Bub Tosh reported a tough morning and when we connected with him around 9:45, he had no fish in the ‘well. Again, Tosh says he needs low water, so he was moving around a lot, in hopes of finding active fish.

We did not find fourth-place pro Nick Nourot, but considering that he caught his better fish — including his final day two cull — in the afternoon, we can safely assume the low-tide stage will help him, as well.

Interestingly, Blake Dyer, who has led the tournament since day one, got off to a quick start with a limit of about 16 pounds by 8:30. He came into the final round with a 5-pound, 5-ounce lead over Wilson, but considering the fact that his closest competitor broke 20 pounds on both of the first two days, Dyer knows he’ll need to lock up more weight to put this one away.

Like most of the field, Dyer is punching mats and throwing a bladed jig, but he also caught a keeper on a drop-shot. Yesterday, Nourot caught all of his fish on a frog and said he thought he could do it again on day three.

Also enjoying productive mornings were sixth place pro Mike Birch, who started his day with a 7-pounder and had a limit of 17 pounds by 10 o’clock and tenth place pro John Pearl, who has a limit for about 14 pounds.

Though it looks like Dyer has things well in hand, the quality present at the Delta means it isn’t over until the very end. So, be sure to tune in to weigh-in at 3 p.m. PT or come on down to the marina to see it all go down.