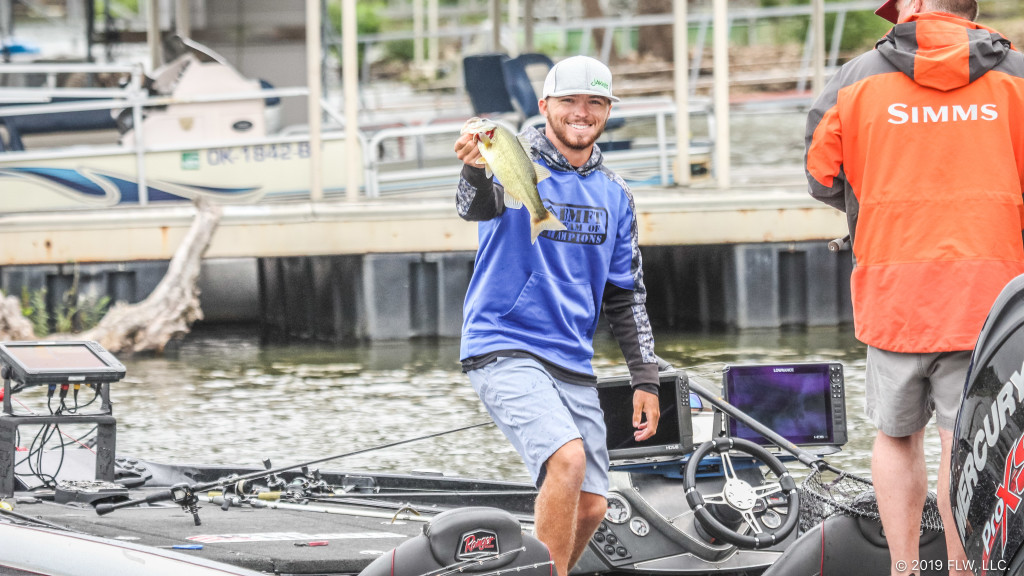 Sheldon Collings Photo by David A. Brown.
Lower temperatures have moved in and cooled everything off – especially the fishing
October 3, 2019 • David A. Brown • Toyota Series

The cold front moving through eastern Oklahoma brought the usual mix of angling disruptions and made for a tough start to the Costa FLW Series Southwestern Division finale, presented by T-H Marine on Grand Lake.

After several weeks of hot, sunny conditions, anglers launched with cloudy skies, stout winds and air temperatures in the low 60s. By midday, the temperature rose into the mid to upper 60s and the wind started to subside, however, the first couple of hours saw Grand Lake’s temperamental side.

At takeoff, a couple of boats started on docks and brush near the Wolf Creek take-off site, but most spread throughout the lake. Right off the bat, we heard anglers like Jeff Ragsdale lamenting the 15-20 mph north wind’s impact on boat positioning.

Also, the massive bait schools that had been reported earlier in the week seem to be on the move, probably spurred by the temperature drop. We saw huge flocks of cormorants, terns and white pelicans sitting idle, but not a lot of feeding. Darold Gleason, who had one keeper on a balsa crankbait by mid-morning, said the bait that had blanketed his area had vanished. This forage movement will, no doubt, influence fish positioning.

As for fishing preferences, the morning wind kept most boats close to shore, often tucked inside protected creek arms and pockets. We found local stick Sheldon Collings working a woody creek with docks and saw him flip his second keeper from a large tree washed onto the side of the channel. Collings reported losing a 4-pounder and a 5 early in the morning — both on topwaters.

Brandon Mosely was the only angler to report a limit. When we found him fishing docks around 11 a.m., he said he had about 10 pounds.

When we found Ragsdale around 11:30, he had recently put two keepers in the boat and lost another on a windy gravel bank with wood. Positioning for another pass, he felt confident he could generate a few more bites.

Elsewhere, Jeremy Lawyer had two keepers — one flipping, the other on a topwater; co-angler Richard Champagne caught two keepers with a buzzbait fished along docks and shallow rocks. Michael Matthee, the FLW Tour pro from South Africa, caught three keepers while cranking a sea wall.

Woodard Chance was cranking riprap in Honey Creek but had a tough morning with several fish shaking off his crankbait. Easing the pain a little was a 4-pounder that gave him a much-needed boost. Michael Bennett showed us a 3 1/2-pounder and Blake Schroeder had a 3.

With afternoon conditions improving, the latter half of the day could offer more opportunities. The morning’s mix of crankbaits, spinnerbaits, flipping and dragging Carolina rigs and football jigs will likely carry through the day’s remains.

Be sure to tune in to weigh-in beginning at 3:30 CT on FLW Live. Just click the link on the flwfishing.com homepage.