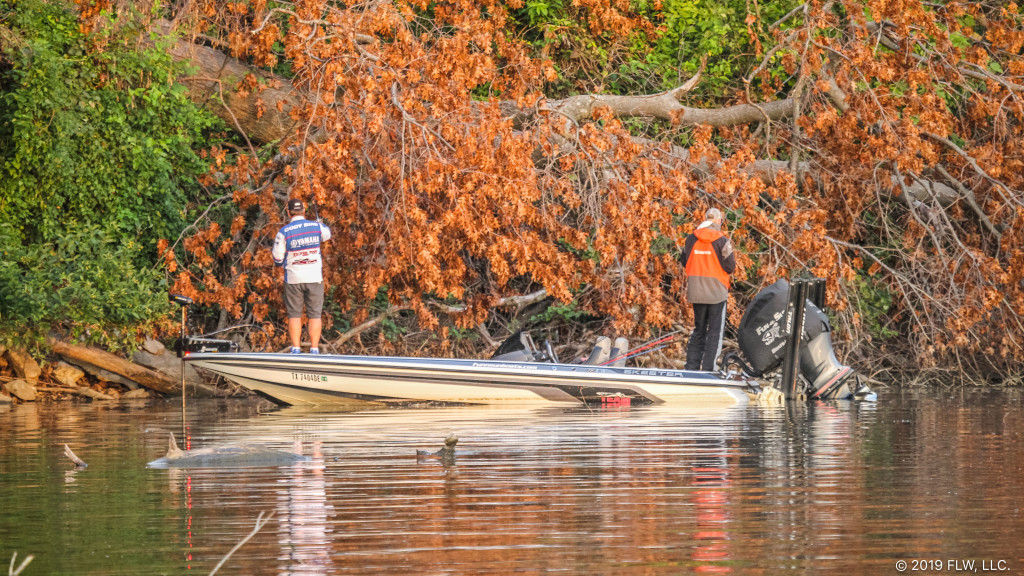 Typically, the first day or two following a cold front put bass in a bad mood, and today, Grand Lake’s fish are following the script. This has created a challenging scenario for the top-10 finalists in the Costa FLW Series Southwestern Division finale, presented by T-H Marine.

Mostly sunny skies prevailed today and the wind has come down from the tournament’s first two days. It’s definitely a pleasant day on the water, but the fishing action has been slow and spotty

We visited day two leader Cody Bird early and found him with one keeper and one bad memory of losing another. Later in the day, we reconnected with the Granbury, Texas pro, and he was still stuck at one.

It’s possible that Bird could make up a lot of ground in the day’s latter hours. He mentioned sacking up most of his day two weight in the last hour, and, with bright afternoon sun pinning fish to cover, Bird’s shallow flipping techniques could very well generate another rally.

Bird needs a solid limit, if not more, today, because second place Jason Christie – who trails Bird’s 32-14 by 7 ounces – will almost certainly add a good final-round bag. We did not find Christie today, so his status is unknown.

Toby Hartsell started the day in fourth, and after diligently flipping docks, he boxed his fifth fish around 10:30. From there, Hartsell started rotating through his big fish spots in hopes of adding a kicker.

Beginning in fifth place, Bradley Hallman had a limit by midmorning, including one that ate a buzzbait just minutes after takeoff. He caught his other four by flipping.

Elsewhere, tenth place pro Lance Crawford parked on an island at the mouth of Horse Creek and had one keeper by late morning. He, too, believes the afternoon bite will improve. Sixth-place Allen Head was flipping docks in the Horse Creek area and reports that he and his co-angler Calan Cameron had caught about 20 undersized fish.

On a day like today, a stumble is just as likely as a heroic rally. Someone will probably find a big bag, but just how the final leaderboard will shape up is anyone’s guess.

Tune in for the FLW Live weigh-in at 3 p.m. CT at flwfishing.com.