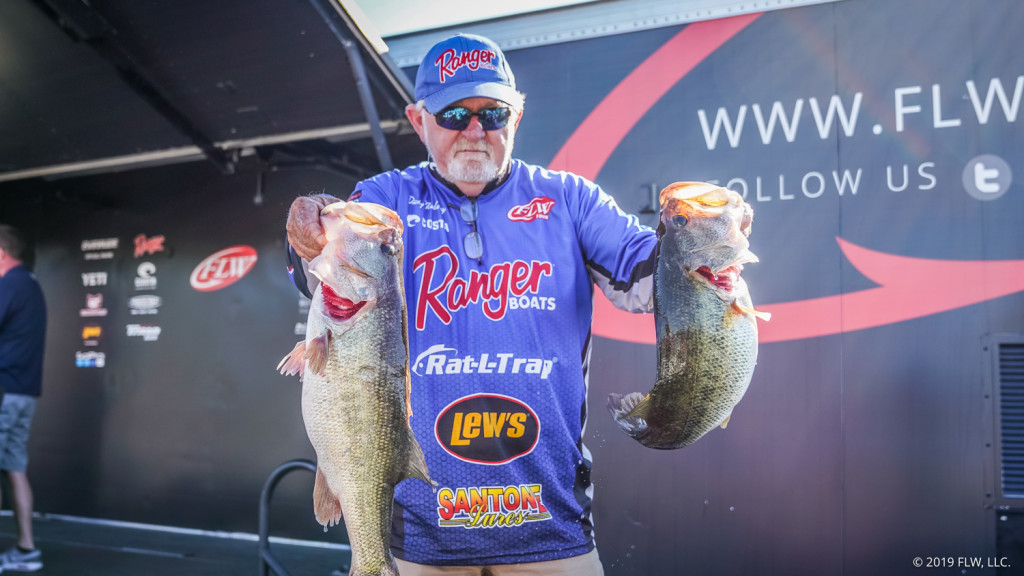 At 65 years old, “rookie” might not be the best word to describe Dicky Newberry’s status as a first-year angler on the FLW Tour. The Houston, Texas, pro is a legend of the sport, even if he hasn’t been competing at bass fishing’s top level for very long. In fact, the list of his accomplishments fishing in Texas and Louisiana is nearly as big as his home lake of Sam Rayburn Reservoir.

Newberry, whose name is practically synonymous with Rayburn, has been fishing tournaments for the better part of five decades. He has six T-H Marine FLW Bass Fishing League wins and another Costa FLW Series win on Rayburn, and his mantel is packed to the gills with top-10 trophies – almost 60 with FLW.

It was sweet redemption in many ways for the Texas legend who still owns and operates his Houston-based HVAC company despite spending so much time on the tournament-fishing circuit. Redemption for missing out on the FLW Cup in his first season. Redemption for what Grand did to him earlier this year on Tour (dropping from sixth to 41st with only one fish on day two). And, in a way, validation for a career filled with big accomplishments. 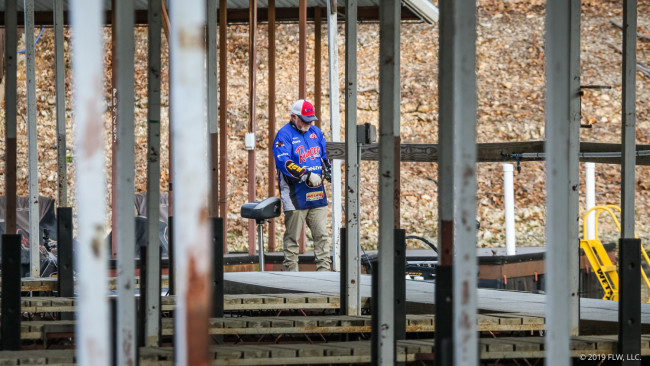 When the FLW Tour visited Grand Lake back in March, Newberry found himself facing difficult conditions on a lake he wasn’t all that familiar with – a common refrain this year for a man who has spent the majority of his tournament-fishing career farther south.

“I had bad practice days like most people did,” he admits. “I only had one bite in three days of practice, and then the first day of the tournament I was culling by 10 o’clock, and really I was up close to 19 pounds. On day two, I could not get a bite. I don’t know exactly what happened. I think I just didn’t settle down. I should have settled down earlier and just kept fishing and kept doing my stuff. That was me being too excited about my first day.”

The result of that abysmal day two (one fish for 1 pound, 10 ounces) was a 41st-place finish and a missed cut.

So, with the Southwestern Division AOY points lead and one tournament to go – at Grand Lake, of course – Newberry found himself face-to-face with the giant he couldn’t slay six months prior. Confidence was not abundant for the lifelong tournament angler.

“Grand, I’ve fished it a few times, but it’s not a lake I’m that familiar with,” he says. “I had an emotional roller coaster tournament there. I had five bad practice days, and then the first day of the tournament turned out just like my practice days. It was not a good night’s sleep there Thursday night.”

Newberry stubbed his toe on day one to the tune of three fish for 5-7. Though Grand was fishing extremely tough with the fall transition in its infancy and a cold front having just moved in, he knew he needed a big day two or his Angler of the Year hopes might fizzle the same way the bite had.

“[Day two] turned out better, so I was able to shake it up and go do something different and finally figured them out a little bit,” says Newberry, who weighed in a limit for 12-7. “I caught enough to make it.

Some of the trepidation Newberry felt heading into day two was a direct result of heartbreak on the FLW Tour and a singular event that precipitated it just a few months prior. 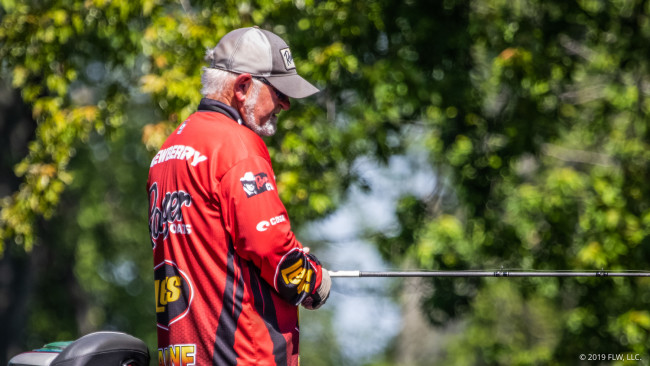 Newberry’s first year on Tour can be summed up with one word: disappointment. He ended with a 61st-place finish in points. By most standards, it was a fairly decent season that featured a 20th-place finish at Lake Chickamauga in May and a typically steady run of finishes in the top half of the field.

But Newberry’s goal from the very start was to make the FLW Cup on Lake Hamilton, and he was absolutely certain it was going to happen as he fished the second day of the Tour finale on Lake Champlain in June.

“The last day of the tournament, I had the Cup made,” he recounts. “I knew I needed 15 pounds to make the Cup, and I’d been riding around with those fish since 10:30 that morning knowing I was going to get to go to the Cup. I was really looking forward to Hamilton.”

With his limit secure in his livewell, Newberry headed back to weigh-in.

“I brought the fish in, and I had one jump out of my bag as I was putting it in the bag and jump back in the lake,” he says. “I’ve fished tournaments for 40 years, and that’s the first time I’ve ever lost a fish [in that way]. It’s kind of like it was one of those fish that was meant to be. I don’t know if we’ll ever know why, but it was just a freak nightmare. A terrible, terrible deal.”

With that limit-filling fish prematurely back to swimming around Champlain, Newberry finished 110th in the tournament and missed his goal of making the Cup.

Still, Cup or no Cup, fishing the Tour did for Newberry what ultimately may have been the reason he won Angler of the Year in the Southwestern Division this season: It rejuvenated his career and his passion for fishing. It’s not that tournament fishing wasn’t fun anymore, but Newberry admits that fishing the same lakes so often put him in a bit of a rut.

“I’m 65, and tournament fishing had gotten into kind of a routine; same old thing over and over,” he admits. “Fishing the Tour this past year, I got my business in shape and got some people in place in the office to where I could leave. By doing that I was able to go devote my time and really concentrate on tournaments and new lakes and new places. It was just a complete new experience, and it just made it a lot more exciting. It brought the excitement back to my tournament fishing.”

Newberry also credits his wife, Deal, and her support of his passion for allowing him to make the leap to the Tour in 2019.

“She had a blast,” he says. “She really enjoyed it. It took two or three out-of-town tournaments to get used to the routine I wasn’t used to.

And make no mistake: It takes a supportive spouse to do what Newberry does, between fishing and hunting (another big passion of his) and owning a business. But don’t expect Newberry to cut back on any of that any time soon.

“Am I going to quit working? Probably not,” admits Newberry. “But I’m going to dedicate all my spare time to fishing.

“The key to having a good life is to enjoy what you do. I enjoy my business, but I enjoy fishing, also.” 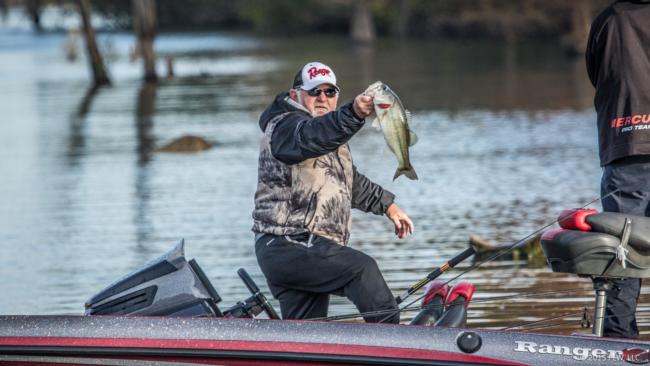 What’s next for Newberry?

With the momentum of winning Angler of the Year on his side, Newberry will turn his attention to Lake Cumberland and the Costa FLW Series Championship at the beginning of November. He admits he wasn’t looking forward to it as much until he locked up the points title last weekend.

Now, he’s ready for the experience of competing on unfamiliar waters once again.

“I’m looking forward to it. I really am,” he says. “I’m not afraid of going and catching smallmouth if it’s set up for that. I understand there’s quite a few smallmouth; largemouth, too. I’m going to play it by ear when I get there and see what fits my style.”

Newberry mentions Cumberland’s smallmouths because brown bass gave him so much trouble at the Tour event on Cherokee Lake in April, where he finished 135th.

“My worst [Tour] tournament was Cherokee, and that was all those smallmouth,” explains Newberry. “Day one, I kept breaking them off. I’m not a light-line guy, and I try to horse them a little bit more. Day one bit me there. I broke off four or five fish and jumped off a couple. A couple of those fish and I wouldn’t have had a bad tournament and I’d have made the Cup.”

But Newberry still has goals beyond doing well at Cumberland. His first taste of the Tour wasn’t enough to satisfy his competitive spirit.

“I want to win one of the big tournaments,” he adds. “I want to win an FLW [Tour] tournament. I’d like to finish in the top 10 in points, if not be in the running for a points title. I mean, that’s two big goals, but I’ve got to start increasing my goals. Last year going into the Tour, my goal was to make the Cup. This year, I want to go up the leaderboard, and I’d like to win one of those tournaments. It’s a realistic goal.” 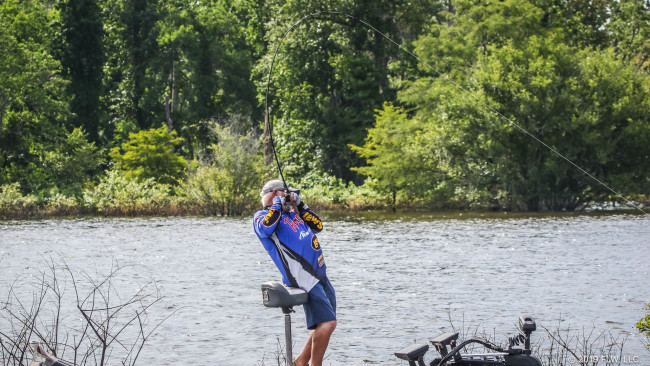 Ray Hanselman demolished the rest of the field – Newberry included – on Amistad by sacking up 25 pounds, 15 ounces on day one. His was the only bag over 20 pounds for the event.

Newberry turned in a 13th-place finish with a combined two-day weight of less than what Hanselman caught just on the first day.

“I was within hollering distance of Hanselman both days,” he says. “I just missed that group of big fish. I caught a lot of fish in that tournament, and I feel like I made adjustments and I was doing the right thing. The fish I found didn’t bite the way I was expecting them to, but I made some adjustments and was able to catch a limit.

“All my big fish went back out deeper to where Ray was at. There’s something on his boat that they swim to, I think.”

Still, with limits of 10-11 and 9-12 on days one and two, respectively, Newberry put himself in great position for the next event on his home lake.

Originally, this event was scheduled for Grand Lake, but massive amounts of rain led to flooding on Grand for most of the spring and summer. As a result, Newberry’s showdown with his recent Tour nemesis would have to wait until later. Instead, he made a top 10 at Rayburn, finishing seventh.

While a seventh-place finish is enough to leave most anglers elated, Newberry wasn’t quite that happy. He felt like he had a chance to win this tournament.

“I was disappointed,” he admits. “I thought I had the opportunity to do better. I just never got the right bites, or enough of them. I was on a lot of fish, and in my practice I thought I was going to do a lot better. I caught a lot of fish. I was catching 30 keepers a day all three days.

“I was happy with that. I had a lot of fun, but I just needed a lot more of those 5- and 6-pounders I couldn’t seem to get.”

Newberry was more excited to finish 24th at Grand than seventh at Rayburn because of the stakes he faced heading into the final tournament. Had things gone south on day two, he would have found himself on the outside looking in with regard to AOY, and Grand once again would have been a thorn in his side.

Instead, Newberry regained his composure after weighing in just three fish on day one and sacked up 12-7 to secure Angler of the Year.

“After day one, I didn’t want to see Grand ever again,” Newberry jokes.

What else was at stake?

Here’s a look at the top 10 pros in the Southwestern Division in 2019.