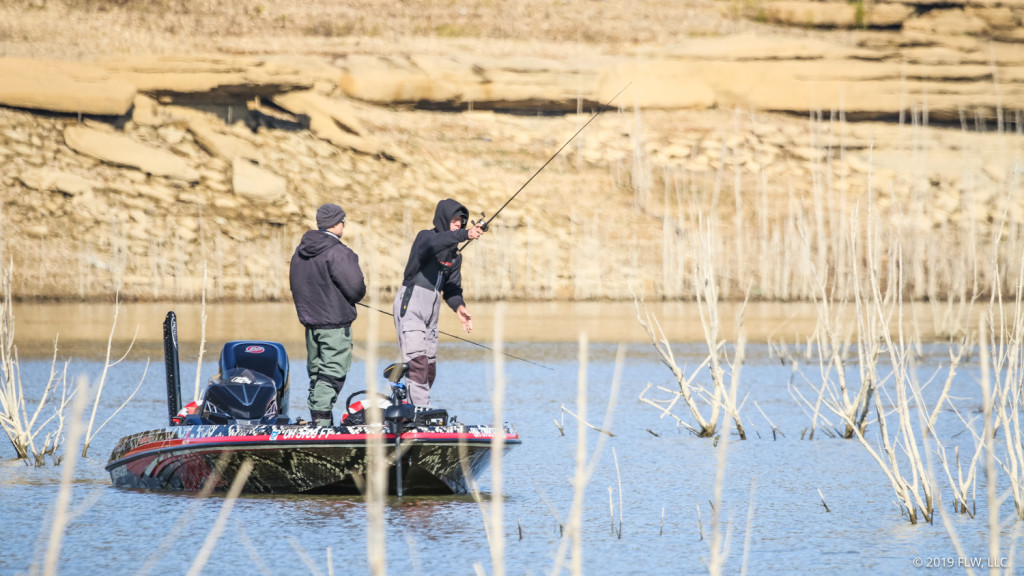 With FLW Live going off the air in a few minutes, we'll be shutting down the live blog as well.

As for final updates, we really only have two more anglers to report on. Kyle Welcher has a limit for about 11 pounds and Mike Casada has three fish for 4 pounds (likely all spots).

It's been feast or famine today, though it seems more anglers are starving than stuffed. We've certainly seen some good limits – Welcher among them – but there haven't been that many. The afternoon bite still has the potential to heat up, as anglers with late boat draws will have a chance to get after some of these late-day fish. But, all in all, we're likely to see lower weights than we saw on the weigh-in stage yesterday.

Speaking of weigh-in, be sure to tune into FLW Live again at 4 p.m. ET to see which 10 anglers and 10 co-anglers will be fishing on Championship Saturday. 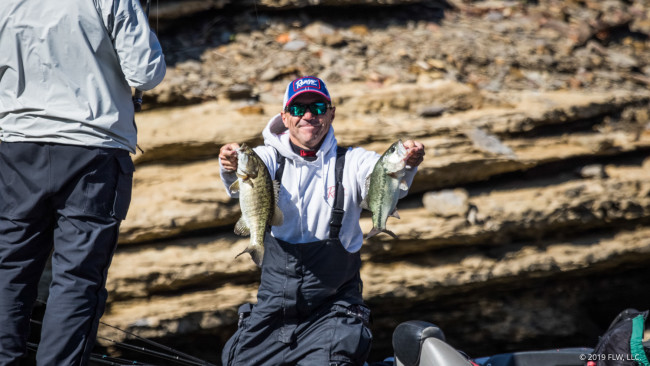 Randy Cisler reported to our on-the-water crew that he has four fish for about 10 pounds. Similarly, Nick Thliveros has four for 13. If Thliveros catches a fifth (and potentially culls at all), he might come back with the biggest bag of the day.

Casey Scanlon only has one, but it's a good one. He just landed a 4-pounder to anchor what could be a good bag if his fish are starting to munch. Kickers like that are crucial in any event, but especially in this tournament with a shot to fish on day three.

Unfortunately, not everyone has experienced such solid days. Todd Castledine says he's "not doing well" and Billy Hall hasn't picked up a keeper. That seems to be a common refrain under bluebird skies today. 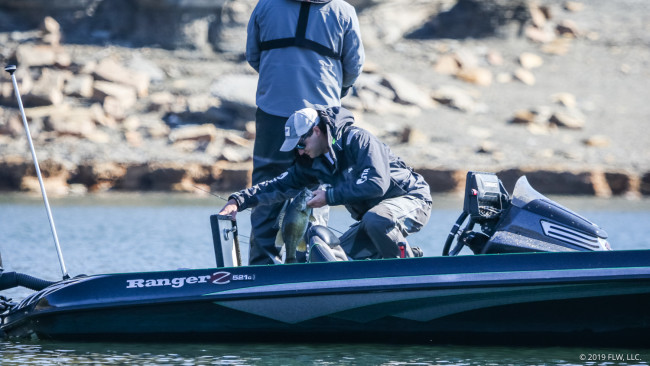 While several anglers probably have limits by now, we can at least confirm one. Luke Plunkett has five in the box for about 10 pounds with plenty of room to cull. If he's on them after finishing day one in seventh place, it's hard to imagine he won't make the top-10 cut and be fishing tomorrow.

At the opposite end of the spectrum, Casey Scanlon still has work to do. He sitting with zero still and desperately needs his fish to fire.

Hunter Mills has a few smallmouth in his livewell and one of them is a 3-pounder. That's basically a kicker fish on a day like today.

Michael Wooley has two in the livewell for about 3 pounds, but his day has been even rougher than it looks on the surface. He's lost several fish today, and every fish is crucial on moving day, especially with fishing as tough as it is.

Brad Cook has three in his livewell: a spot, a largemouth and a quality smallmouth. Matt Wood has struck out to this point. He's still looking for his first keeper. Last time we checked in with Jimmy Washam, he reported having two fish, though he didn't specify as to the size. 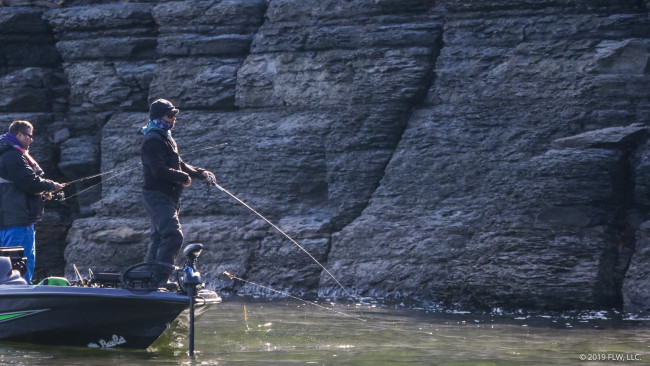 Most of the field is struggling, but Andrew Upshaw seems to be dialed right now. He has four fish with his best being a 2 1/2- and a 3-pounder. That should put him around 9 or 10 pounds, which is a solid start for not yet having a limit. If he can catch five and cull once or twice, it might be enough to jump all the way to the top of the leaderboard.

Bradley Hallman has one 2-pounder in the box. Sunny Hawk has one as well, a keeper largemouth.

Otherwise, it's been fairly quiet heading into the afternoon. Perhaps a couple more hours of stable weather could entice some fish to get chomping. 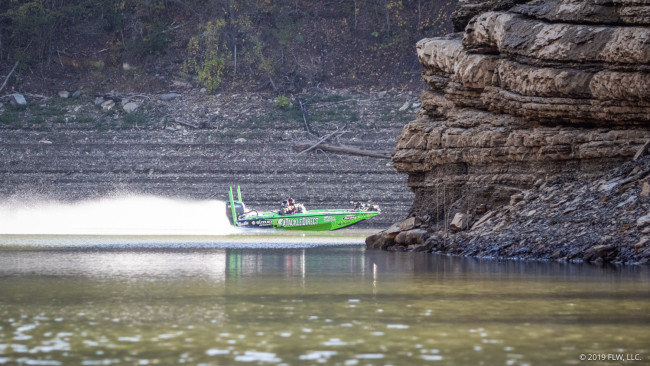 There's not a lot going on right now, but we have a few updates from the rest of the field.

Les Zacny has a couple fish in the box and his co-angler, Johnny Matthews, has one. Likewise, Adrian Avena has a pair of fish in his livewell. Meanwhile, Charles Whited is still searching for his first keeper.

Spinning rods seem to be a lot more prevalent today, to the surprise of few. While moving baits did a lot of heavy lifting yesterday, today's conditions have necessitated slower, more finesse-oriented approaches as Cumberland's bass have gotten more finicky. 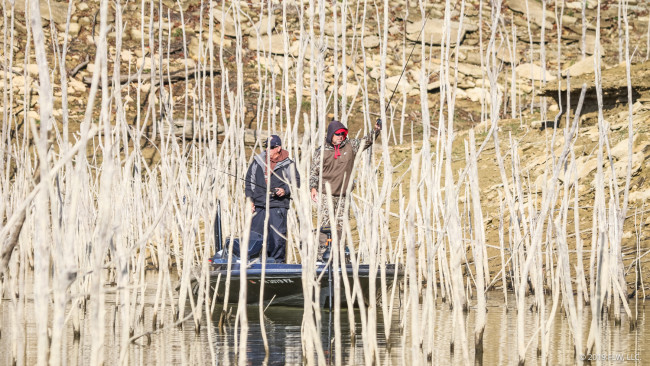 We're not seeing nearly as many fish catches today, as expected. The weather has really thrown these bass for a loop, shutting down a lot of fish that were much more active amid the rainy and warmer conditions yesterday. Kurt Mitchell is among the group of anglers finding it tough to get solid strikes today. He says bass are just slapping at his umbrella rig and he's still sitting with zero fish in his livewell.

Steve Floyd isn't having a bad morning, though. He has two for 5 1/2 pounds, but he's also lost a couple. His bite was better first thing this morning. Since then, things have slowed down a bit. 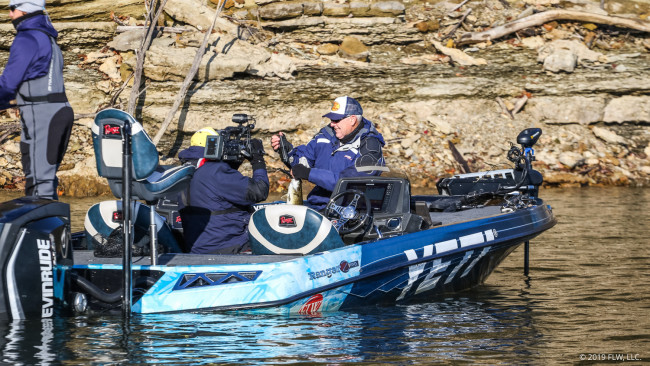 Roger Cousens just caught his first keeper of the day. He weighed the smallmouth on FLW Live and confirmed it was a 2 1/4. Even though it would have been his smallest fish in yesterday's bag, it's a good start on such a tough day and the first step toward a limit that could keep him in first place heading into Championship Saturday.

Shawn Kowal just caught a quality green one on a spinnerbait fishing some submerged timber. It looked like a fish in the 3-pound range. He's still up near the north end of the lake not far from Steve Floyd.

Leader Roger Cousens is still searching for his first keeper, but he's been mixing it up quite a bit this morning. He seems to have a pretty good feel for how unpredictable Cumberland can be in the fall.

Elsewhere, Casey Scanlon is still working his area near the dam. His fish will fire at some point today, and it's just going to come down to when and if Scanlon is still in the area when it happens. 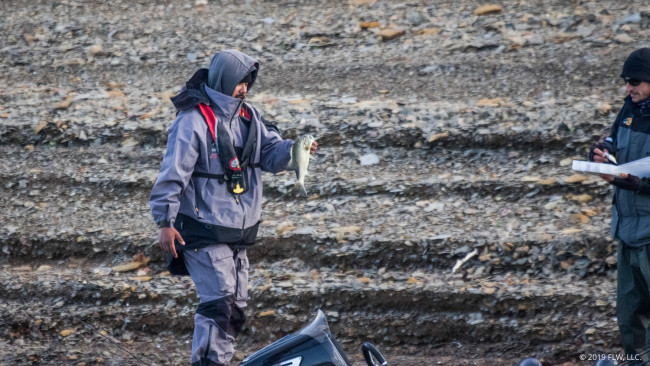 Robert Nakatomi has one in the box, a keeper smallie he caught on a crankbait. "I knew I would catch one because I saw Bryan Thrift. It must be a good area." Nakatomi is clearly in good spirits today.

Andrew Upshaw is having a tough start, having missed a couple and broke one off. He says the fish are just picking at his bait today, as opposed to swimming off with it like they did yesterday – an indication that the cold weather may be putting fish in a more finnicky mood.

FLW pro Casey Scanlon has a spinning rod in his hand fishing near riprap down by the dam. He's seeing fish in his area (the same area he found a school yesterday), but no luck so far. He says he's hoping some current will get his fish fired up once the dam starts pulling some water.

Fishing Creek is full of boats, but the entire top 10 is spread out across the lake, from Scanlon to the south to Michael Wooley to the far north end. Shawn Kowal and Steve Floyd are also up near the north end fishing near Pulaski County Park. Robert Nakatomi is really the only angler in the top 10 near the midlake area. 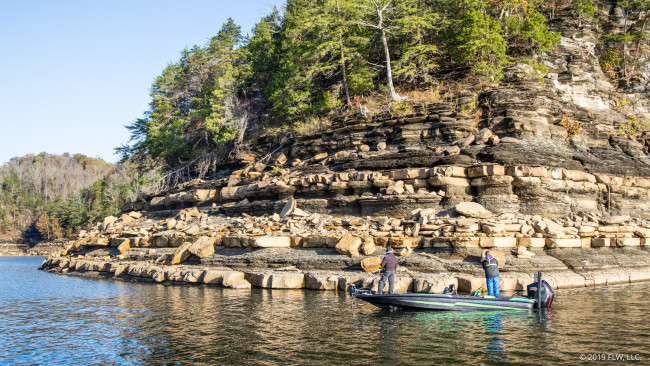 We've got eyes on most of the top 5 thanks to our on-the-water reporting crew. FLW pro Andrew Upshaw, who entered today in fifth place, is pitching along a bluff wall on the main lake. He's done well on these types of fisheries this season, particularly with his FLW Tour win at Cherokee Lake. If there's smallmouth in these southern fisheries, Upshaw is great at finding them and figuring out how to make them bite. He's tossing a jig and just caught a fish that won't quite measure. Upshaw is looking for a bonus fish before he heads to the juice.

Robert Nakatomi (second place) is winding a crankbait along the submerged tree line on some flat banks. He's also mixing in a jerkbait, which could be a major player as this tournament goes along. Suspending fish could be a big key to finding something just a little different in light of the recent cold snap.

Tournament leader Roger Cousens is on his first spot and fishing slow. He's getting some love on FLW Live right now. It took some time to get to his starting spot, but Cousens is back to doing what worked so well for him yesterday.

Most of the field has found its way to starting spots by now. It's a cool, crisp morning, but fog didn't prove to be an issue as some thought it might be today. Sunny skies should be prevalent, though it's hard to say what that will do to the bite. 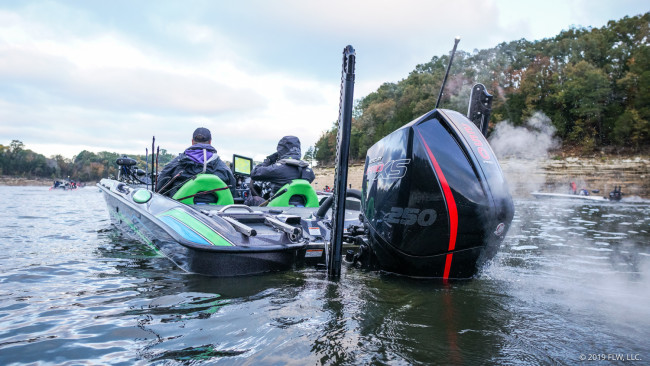 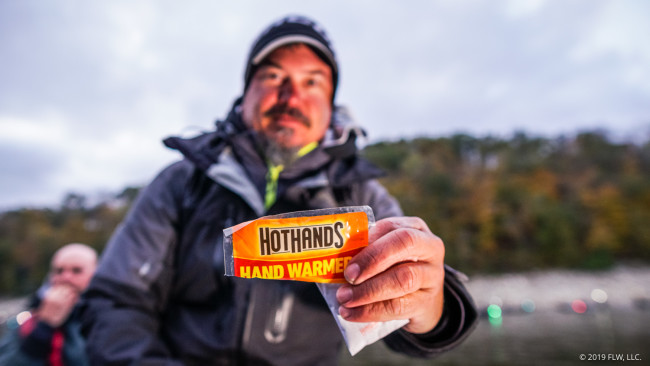 Day one of the Costa FLW Series Championship proved to be about as challenging as many anglers anticipated after a tough practice period, but it wasn’t all bad. Zimbabwe’s Roger Cousens certainly wasn’t complaining. His tournament-leading 17-pound, 2-ounce bag was exactly what he had hoped for as the tournament kicked off, and he’s gunning for another big stringer today.

But conditions might not be ideal for many big bags to cross the weigh-in stage this afternoon. After a rainy, windy and cold Thursday, today promises drier weather, but it won’t be any warmer. It’s barely above freezing as anglers take off, and afternoon highs are unlikely to touch 50 degrees.

One thing is for sure, though: Someone is going to catch them today. The Championship field is too big – and loaded with too many great anglers – for Lake Cumberland to come out on top.

Hang around for full live coverage in both the live blog and on FLW Live, airing from 8 a.m. to 2 p.m. ET on flwfishing.com and at 4 p.m. through the end of weigh-in.

Sky: Some clouds at takeoff, clearing by 11 a.m.