Fishing is still tough, but things are looking up 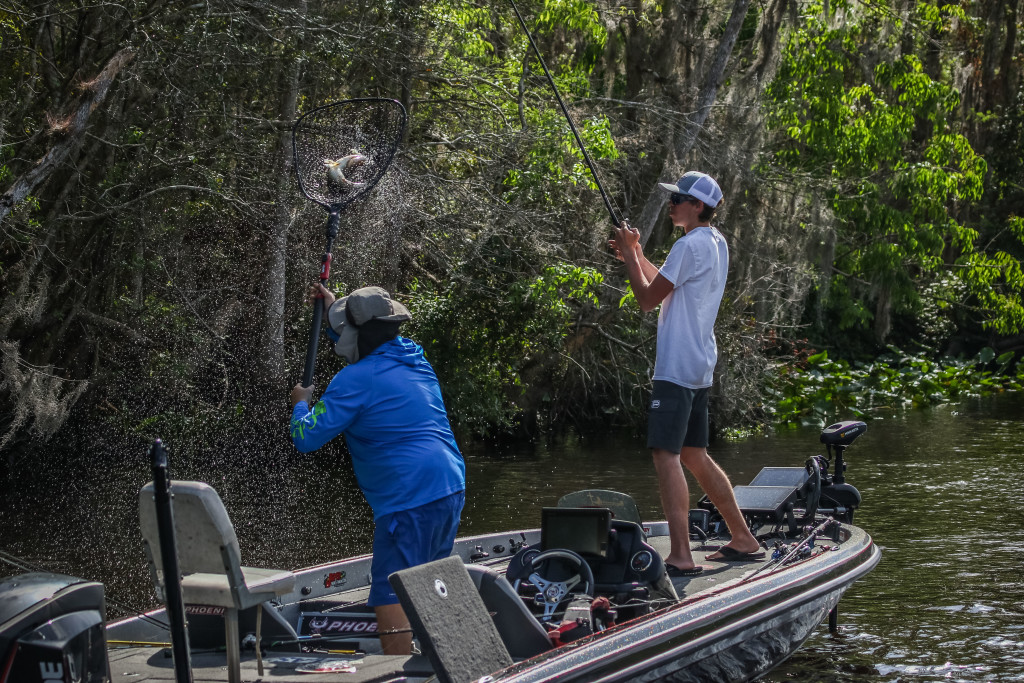 As expected, the St. Johns River is still fishing pretty tough in the Toyota Series Southern Division opener, which kicked off this morning. The St. Johns holds plenty of good fish, but she’s not all that willing to give them up right now.

We touched base with several anglers across the field throughout the day, and while few reported limits, there’s still a lot of time left to fish. Among those limits is one from Anthony Ford, who had 13 pounds or so by around 11:30. He’s clearly on some fish, as his co-angler, Kenneth Hunnicutt, also reported a limit of about 10 pounds.

Lonnie Oneal also reported a limit a little before noon. He managed to pull about 12 pounds from the St. Johns throughout the morning.

Elsewhere, Christopher Keeble had three fish for about 4 pounds before we found him, and nearly doubled his weight with one cast shortly thereafter. The Lenoir City, Tenn., angler managed to land a nice 4-pounder on a white ChatterBait around some lily pads and laydowns in one of the St. Johns’ many backwaters.

As tough as the fishing has been to this point, there aren’t a lot of boats just running around. Anglers have some good areas to fish, with a lot of the field stacked between takeoff at Palatka down to the northern end of Lake George. The wind has picked up quite a bit, though, and making a long run back to weigh-in could be a little time-consuming for pros such as Tim Frederick, who planned on making a long southward run to start the day.

We found Dakota Ebare first thing this morning, but he hadn’t had any luck yet. He was flipping some docks north of Lake George, reporting only one bite (that he missed) at the time. Ebare’s best bite in practice this week came on a wind- and current-related deal, and he expected to probe his best area later in the day once the wind picked up.

With so many canals on Lake George, it’s no surprise many anglers in the field opted to fish in or at the mouths of those backwaters. Dennis Cameron started his day doing that, but he wasn’t having much luck when we found him around 9 o’clock. He was slinging a buzzbait and flipping a wacky-rigged worm to no avail. Cameron says he caught some good ones in canals in practice, and that he really needed the sun to start poking through.

Luckily, it did just that around 11 o’clock, with clouds starting to thin out a bit and the temperature increasing. That’s right in line with the warming trend we saw all week, which should continue to stabilize the fishery and prompt more fish to move up shallow.

It seems like one of the predominant patterns we’ve seen develop today is the shell-bed bite. Several anglers, including Oneal, seem intent on targeting those bits of offshore magic – Oneal with a Carolina rig and a spinnerbait. Elsewhere, there’s a lot of flipping going on around docks and lily pads. There isn’t a massive mount of grass in the St. Johns, but there are plenty of pads to be found.

Among the anglers flipping pads is Steve Young, who had about 4 pounds around 10:30. He says it’s hard to pattern his area because there are some stretches of pads holding multiple fish and then long stretches of fishless foliage.

As tough as the fishing seemed to be this morning, it could be equally strong this afternoon. The sun is out, the temperature is rising, and the wind and current remain consistent and steady. As things continue to stabilize across the fishery, there’s a good chance we see more fish moving up shallow throughout the tournament and increasingly larger bags on the weigh-in stage.

To see how things shake out on day one, be sure to tune in to the live weigh-in on FLWFishing.com at 3 p.m. ET.