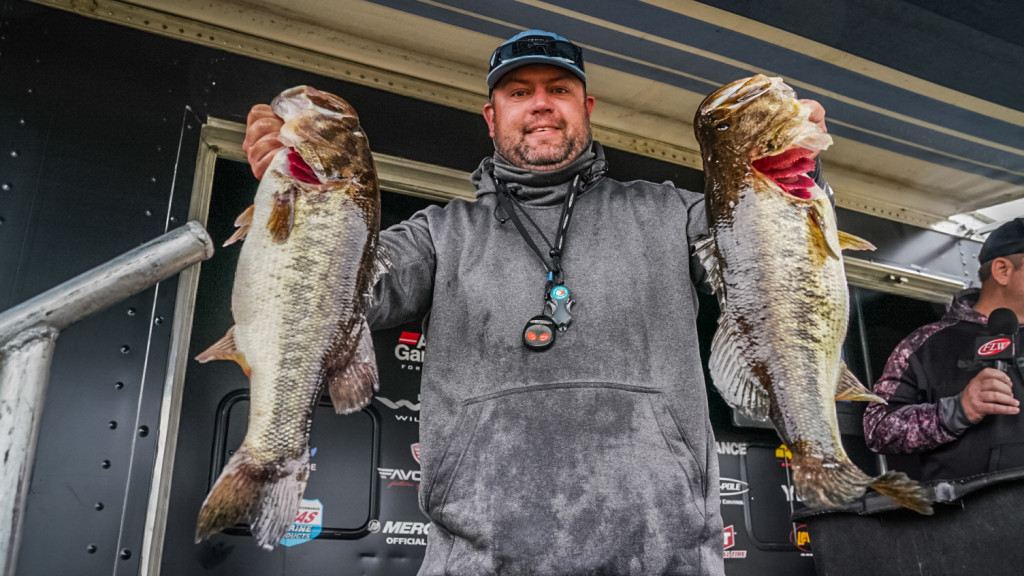 Jason Blair had never fished the St. Johns River before this week and the Toyota Series Southern Division opener. Being from West Palm Beach, Fla., he has plenty of other famed Florida fisheries to call home, but the St. Johns may be one he’ll want to add to the list.

In his first tournament on the fishery, Blair has sacked up 39 pounds, 15 ounces over two days (22-3 of which came on day two) and finds himself in the lead going into Championship Saturday. And he’ll be dancing with the date that brought him again tomorrow.

Working mostly around lily pads and long-casting a Bruiser Baits Big Stick in black and blue, Blair has been targeting areas he thinks fish are moving up to and looking to spawn. That’s what worked on day one – despite what he considers to be a terrible practice – and that’s what helped him put together a tournament-leading stringer today: swimming and dragging a worm around lily pads.

Will he look to replicate that on day three?

“Absolutely,” he says emphatically. “It’s what we always do in Florida. It’s in my comfort zone. It’s right up my alley.”

Blair has also done a great job making the most of his opportunities, fishing as clean a tournament as he possibly can.

And it’s a good thing, too. One of those fish was a 7-pound, 6-ounce kicker that anchored his bag. That’s a good sign, considering Blair has been seeing a lot more males moving up to beds over the last two days.

“I caught a couple good ones yesterday as well,” he says. “I do feel like there were some more bucks in there today, and hopefully some more females move in with those buck bass.”

While not a typical tidal fishery with heavy water-level swings, the St. Johns definitely experiences some tidal influence, and Blair has made a point to get dialed in on the daily fluctuations as best he can. In the mornings, he’s been ducking into some of the many canals and backwaters on the fishery to put together a quick limit, which he had by noon today. By 9:30, he was sitting with three quality fish in his livewell for about 12 pounds.

It’ll be business as usual for Blair tomorrow. His pattern is working for him, and securing the title could very well just come down to execution, especially if his fish continue to move up. The only real question is what the weather is going to do, especially with sustained winds in the forecast for tomorrow and lower temperatures overnight tonight.

“It’s getting a little cool tonight, so I’m hoping my fish hold and praying to God,” he adds.

While Okeechobee is what Blair considers his “home lake,” he’s not missing the Big O right now. He’s perfectly happy to be a little farther north, fishing the final day of this tournament.

It’s not often a professional angler opts for the back of the boat, but that’s exactly what Tackle Warehouse Pro Circuit rookie Roger Hughes did this week on the St. Johns. And he did so to the tune of 21 pounds, 4 ounces on Friday to erase a less-than-stellar day one (3 pounds, 4 ounces) and take the co-angler lead.

Hughes, who hails from Bartlesville, Okla., decided to enter the Toyota Series Southern Division opener for two reasons: to help a local get into the tournament, and to get in a little practice ahead of the Tackle Warehouse Pro Circuit even on the Harris Chain next week.

“A local guy needed in, so I told him I’d go as his co-angler to guarantee him to get in,” he says. “I’d never fished in Florida, so I just wanted to get familiar with the waters.”

It was a fortuitous decision – as was another crucial decision he made on day two.

“I got really, really lucky on the big fish,” he says of the 8-pound kicker he weighed in. “I caught it on a ChatterBait out in open water. It’s an Oklahoma thing. In the mouths of creeks, they stage there before they go back in, and so I was just hoping I could catch something staging and got lucky.”

That ChatterBait was a black and blue 3/8-ounce Z-Man/Evergreen ChatterBait Jack Hammer, which many people in Florida throw, though maybe not in the same way Hughes utilized it today. He caught three of his other four fish on a green pumpkin Zoom Brush Hog, Texas-rigged with a 3/8-ounce weight.

While Hughes’ skill was certainly on display the last two days, he also credits a lot of his success to some lucky boater draws.

“I kind of am a blessed co-angler,” he says. “My partner yesterday fished the exact same tree line as my boater today did.”

And while Hughes probably won’t end up fishing that same tree line again on Championship Saturday, he seems to be doing a pretty good job figuring out Florida fishing. At the very least, he’s giving himself a solid crash course ahead of next week’s Pro Circuit event.