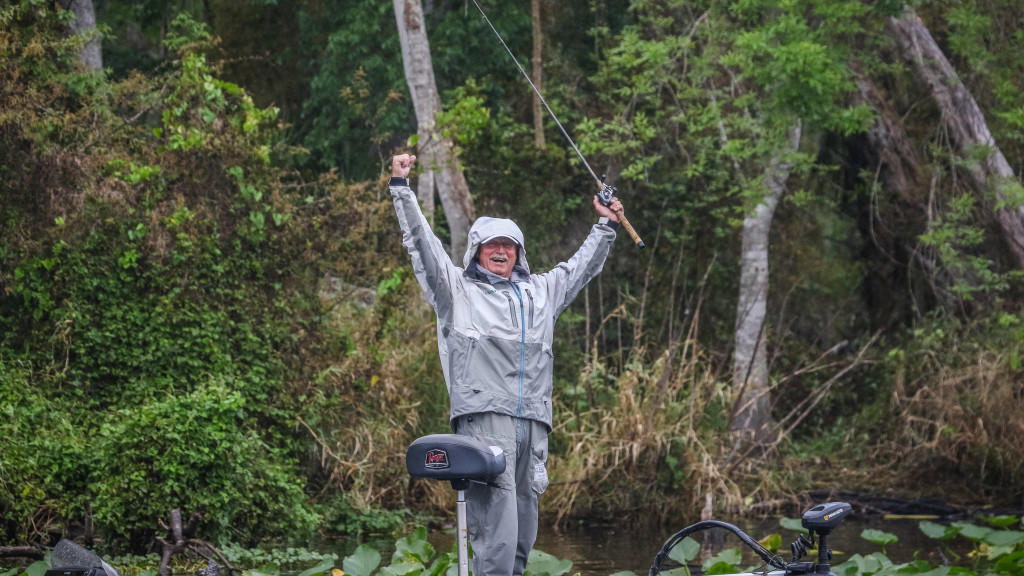 After a warm but windy day to start the Toyota Series Southern Division opener on the St. Johns River, day two brought lower temperatures, rain and a shifting wind that blew right up the chute early this morning.

As such, running through Lake George – as much of the field did this morning – wasn’t an easy task. The return trip might be just as arduous, as the wind is still blowing, and those anglers need to be prepared for a long, potentially wet trip back to weigh-in.

Tim Frederick is making the longest run of anyone in the field this week, though it worked out for him yesterday to the tune of 19 pounds, 1 ounce. He made the same run today – an hour and a half or more – to get to his juice, which he says is about all he has to fish the rest of the week.

But somewhere between Lake George and Frederick is where much of the field has been fishing today, flipping and winding lily pads in the Astor area. That stretch is littered with pads, and Brandon Classon Sr., Wendell Causey Jr., Dean Boruff, Reid Heard, Robbie Crosnoe and Laramy Strickland were all working those areas this morning.

Unfortunately, none of those anglers reported catching much. Classon had one small one when we checked in with him around 9:30. Causey was fishless, though he says he lost an 8-pounder early in the morning. Boruff reported having two small ones in his livewell, and Heard had one.

Strickland, a Tackle Warehouse Pro Circuit rookie this year, only had two keepers when we saw him around 10:45, but he had about 12 bites to that point, breaking off a couple giants. He says the fish just don’t seem to be eating right, which likely has a little to do with weather conditions.

Farther up the river, the fishing seems to be a tad better. Jason Blair, who entered the day in seventh place, has a limit of at least 15 pounds. He still has a couple small ones in that limit that need to be replaced, too. Additionally, his co-angler, Kevin Thomas, has a “big limit,” but we’re not sure how big exactly.

Zak Fadden, who entered day two in ninth place, has a small limit. He was working pads on the main river this morning. In third place, Kyle Welcher has four fish, but “nothing over 2 1/2 pounds.” He also made sure to voice his disgust with flipping pads, which he says he almost can’t stand to look at, mostly because they take too long to fish.

Additional anglers in the top 10 made long runs, and we weren’t quite able to track them down. There definitely seems to be a strong contingent of anglers who were aiming to leave the rest of the field to its own devices this week, mostly looking for unpressured and cleaner water. The wind certainly hasn’t helped clear things up around Lake George.

Overall, results seem to be a mixed bag right now. Some pros are on them and others are struggling, but that was the case yesterday, too. In this tournament – as with many others – consistency is going to be key for fishing on Saturday.

To see how things shake out the rest of the way, be sure to tune in to the live weigh-in on FLWFishing.com at 3 p.m. ET.