The afternoon bite could be key to big bags 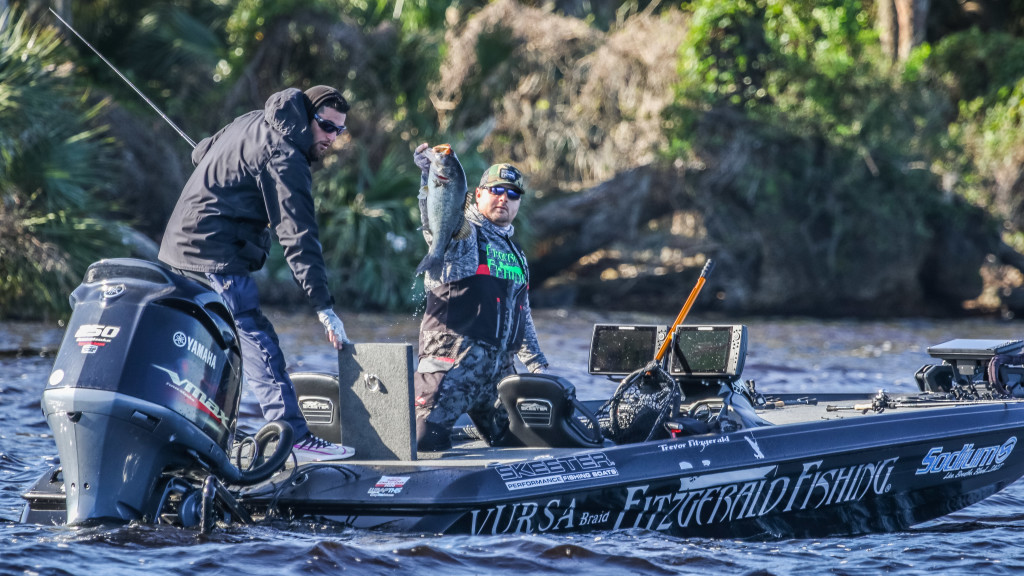 Day two of the Toyota Series Southern Division opener on the St. Johns River brought more fish, bigger fish and eight bags over 20 pounds – a marked improvement over what we saw on day one. Day three could go either direction, though, as a small cold front overnight left behind bluebird skies and abundant sunshine today.

While this could be attributed to any number of things, the fact that several pros we’ve talked to today suggested the fish are just “biting funny” probably means the weather is going to be a big factor in what we see come across the weigh-in stage this afternoon. Still, it seems to be the general belief across the field that the bite should pick up as the temperature continues to climb this afternoon.

Jason Blair was one of the last anglers we checked in with early this afternoon, and he had 12 pounds at the time, picking up his limit-filler fishing in a canal. Just a few hours earlier we found him with three fish for 6 pounds, so he’s been doing some work upgrading a modest early bag.

For every pro like Blair we talked to, there was someone like Jonathan Kelley (who entered the day in 10th place). At 10:30, we found him working in a backwater canal, and he had zero fish in his livewell at that point. Similarly, Jason Meninger (fishing south of Lake George flipping some pads) had one decent fish to start the day and pulled in another small buck bass off a bed, but not much else by 9 o’clock.

Rodney Marks (fifth place entering today) was fishing in the same area as Meninger, but he wasn’t having much better luck. Marks said he had two fish for 4 1/2 pounds around 9 o’clock, while his co-angler, Chris Holland, had one fish in the box. He was taking advantage of some sparse lily pads just south of Lake George, dragging a worm.

We didn’t check in with everyone, but of the anglers we saw on the water today, Trevor Fitzgerald was having by far the best day. He had a 7-pounder in the box as his first fish and managed to add three more small keepers in short order. With a ton of room to upgrade and a magic little spot in the form of a depression at the south end of George, he might be the pro to watch this afternoon after entering today just 1-11 off the lead.

Fitzgerald is having a pretty good day, but even he says the fish just don’t seem to be acting right.

“They’re biting funny today,” he says. “This front’s got them.”

That very well may be the case. The water is a little higher than it’s been – a good thing for anglers targeting bass moving up to spawn – but it’s dirtier water, and it’s 2 or 3 degrees cooler today than at the start of yesterday. Again, though, that may change as the weather warms up this afternoon.

Anglers still have a couple more hours to fish, and they may need every minute of it. The wind has definitely picked up a bit since takeoff, so getting through Lake George for the anglers fishing farther south may take a little extra time.

Be sure to tune in to the live weigh-in on FLWFishing.com at 3 p.m. ET to find out who managed to crack the code and bring in the winning bag of fish.