The spawn is starting to heat up 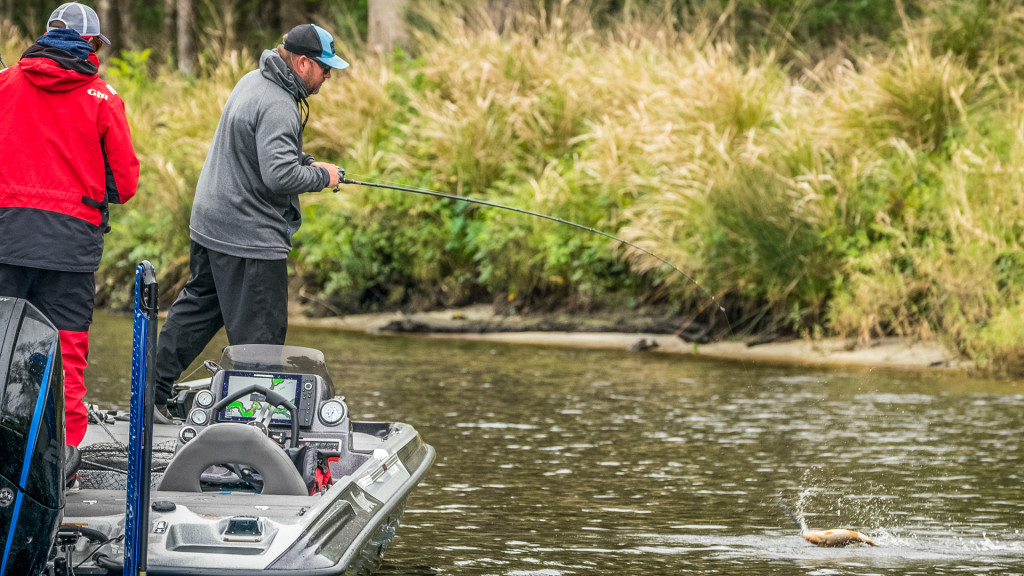 It’s been a question of when, not if: When is the first big wave of spawners going to move up on the St. Johns River?

That question may have been answered on day two of the Toyota Series Southern Division opener, as more and more anglers brought big fish across the weigh-in stage, with many of the bass coming from beds or shallow cover where fish are staging to make their big move.

Almost every angler in the top five on day two was targeting those fish, including tournament leader Jason Blair, who’s spent most of his time casting a worm in front of lily pads in search of those big females that are almost to their eventual bedding spots.

Here’s a look at how things shook out for the rest of the top five anglers on Friday. 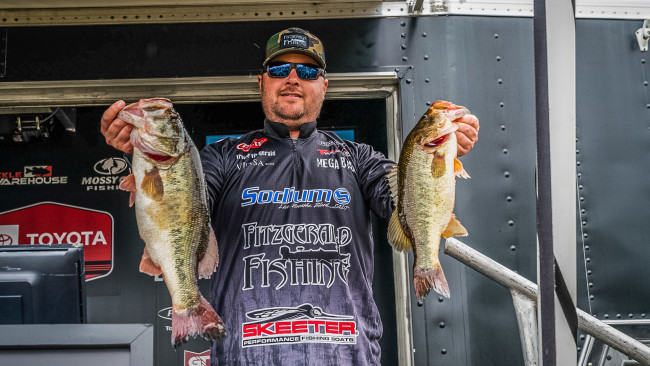 Despite weighing in 4 pounds less on day two than was in his day-one leading bag of 21-2, Trevor Fitzgerald should feel good about how things have played out so far. Most of his best spots were blown out and muddied up by wind, and he was left scrambling and running new water on day two.

And still, the local hammer found a way to get the job done, running mostly new water and junk-fishing his way to a quality bag.

“I’m just hitting different spots,” he says. “I ran a bunch of different spots today. Add them to the rotation and take them off the list if they’re no good.

“There was one spot from yesterday where I caught the 6-pounder today, but that was the only good bite I had today. I caught two 4-pounders there yesterday. I think they’re coming in there. The 6-pounder I got was completely full of eggs.”

Those fish clued Fitzgerald in on a potential plan for Saturday, which will involve once again switching things up and maybe finding more new water.

“I’ll probably change things up tomorrow and fish a little more shallow,” he adds. “I think some of these bigger bags are spawners for sure.” 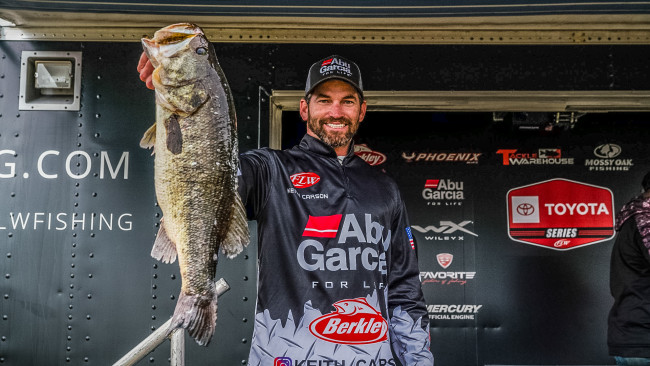 “I ran way south,” he says. “I ran so far I thought I was in the Bahamas. I ran like 90 miles. We went down and fished for an hour and then turned around and ran three hours back.”

It’s amazing what you can do in an hour if you’re around the right stuff. For Carson, that stuff included much cleaner water than can be found farther north.

“I think there’s a lot less pressure,” he adds. “There’s no major tournament that goes out down there. There’s no big boat ramps, there’s less pressure and the water’s better.”

With clean water, Carson was able to sight-fish everything he caught on day two, including a giant 9-pound kicker.

Despite his performance so far, Carson thinks he can find some success on Saturday doing something a little different, and that’s what he plans on doing.

“Tomorrow, I’m thinking I’m just going to flip some mats,” he explains. “I caught one about 9 pounds in practice flipping. I caught a 6 flipping day one in the tournament, and I only flipped like 30 minutes in the tournament. I feel like if I go flip all day, I can catch 20 pounds.”

With fish starting to move up in earnest, he’s confident in that plan – so confident he’s willing to scrap a game plan that resulted in 20 pounds, 5 ounces today. 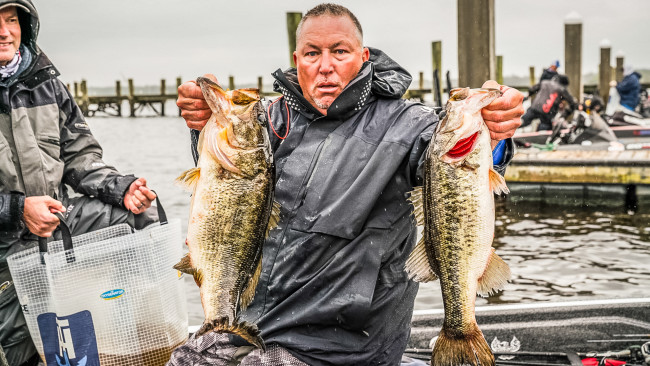 If not for an act of kindness and sportsmanship, Frank Kitchens may well have found himself even farther up the leaderboard after day two. He wasn’t scheduled to check in at 3:30 (having a later boat draw), but a couple fellow anglers broke down and needed picked up, so he brought them back to weigh-in and settled for what he already had in the box.

Luckily, what was in the box was a 20-pound, 14-ounce stringer that he caught flipping a black and blue Texas-rigged Yamamoto Senko with a 1/4-ounce weight around shallow lily pads.

“I’m running down to Dexter, all the way down south, and I’m around and fishing lily pads in shallow water,” he says. “I think it doesn’t have pressure on it, for one thing, and the water is real clear. I think that’s the key. It’s a staging place where they’re ready to come and spawn.”

Kitchens fished that same area on day one and lost two big ones, so he knows he’s around potentially winning fish. And he intends to milk that area again on Saturday in hopes that his fish keep moving up and replenishing.

“It’s mostly the area,” he adds. “They’re coming as fast as I can catch them. I’ll definitely go back. I won’t change anything. I’ll do the same thing again.” 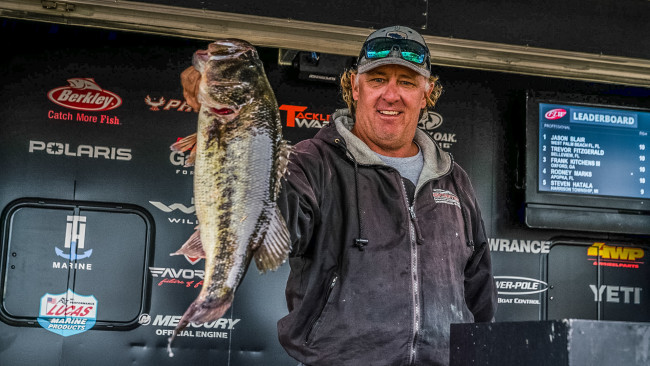 Rodney Marks is proof positive that lure colors often catch more anglers than they do fish. When the bass are biting, Marks says it doesn’t matter one bit what color bait you’re offering. In fact, he’s used three or four different colors this week.

“They’re spawning on those pads,” he adds. “It doesn’t matter what you’re throwing; any kind of soft plastic, any color.”

What Marks isn’t a fan of, though, is how he has to fish those various baits and colors.

“You just have to fish slow, and I hate that,” he adds. “I have a really good co-angler I travel with, and that’s his style of fishing. I always tell him that if we both get a bite, there’s something going on.

“You just have to slow down a little bit. If you catch them out on a shell bed or staging, you can throw some moving baits, but when they’re setting up trying to do something, you just rub the fuzz off everything.”

For Marks, it’s all about location, location, location. He found an area just south of Lake George that other anglers seem to have overlooked this week, with isolated pads in shallow water. It’s easy to miss specific locations like that on a river system packed to the gills with shallow lily pads.

“I was just really happy to be there on the right day,” he explains. “It was calm, slick and I could see what was going on there. I wasn’t there 10 minutes and I caught a 10-pounder in practice. I just made a decision that that’s where I was going to fish.”

Marks has a canal in which he thinks he might be able to pry a few off beds, but for the most part, his plan is to live and die with his spot just south of Lake George. So far, it’s worked out pretty well.