Arizona pro still in the lead at Lake Havasu 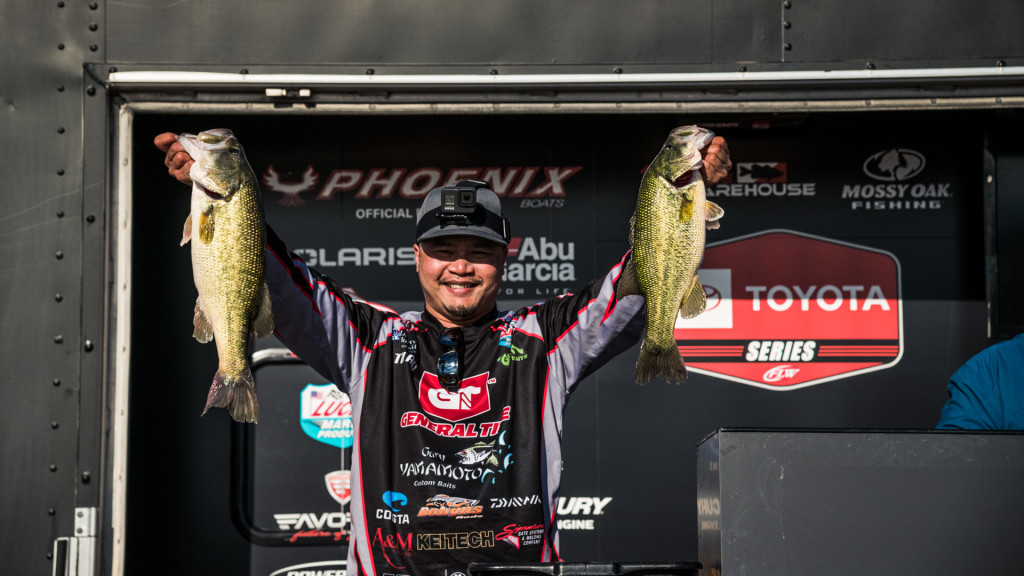 We heard it again and again at Friday’s weigh-in: “Today was a lot tougher.”

Post-frontal conditions, a steady 15-mph south wind and dirty water in many places (thanks to last night’s rains, which led to flash flood warnings in many parts of Arizona) really hampered the bed-fishing bite on the second day of the Toyota Series Western Division event at Lake Havasu. In fact, most of the top pros reported that many of the bass they’d found up on beds Thursday had backed off today.

Tournament leader Tai Au managed to stay in first place by recognizing key environmental factors and knowing when to change up his baits. Yesterday, four of the five bass that Au weighed in were bass he caught sight-fishing. Today, he didn’t look at any of the bass he brought to the scale. Au still managed to weigh in 18 pounds, 3 ounces, taking his two-day total to 44-4. He’s searching for his first FLW victory this week.

“It was definitely tougher,” Au says. “My plan was actually to go to a tule patch to go sight-fishing, and I was pretty bummed out when I got there and couldn’t see more than 2 inches under the surface. Yesterday, visibility was around 5 or 6 feet there. My areas got blown out. I just checked a few other coves. Again, everything was blown out. I just couldn’t see them.”

Despite the rough start, Au caught three fish by about 9 a.m. by slowing way down to counter the high barometric pressure in the wake of last night’s front. Au says he monitors the pressure “religiously” whenever he’s tournament fishing. He goes so far as to call himself a nerd when it comes to barometric pressure, which he thinks takes precedent over things like bait choice and color selection. His entire game plan today was based around the fact that the pressure was high in the morning but would drop midday. 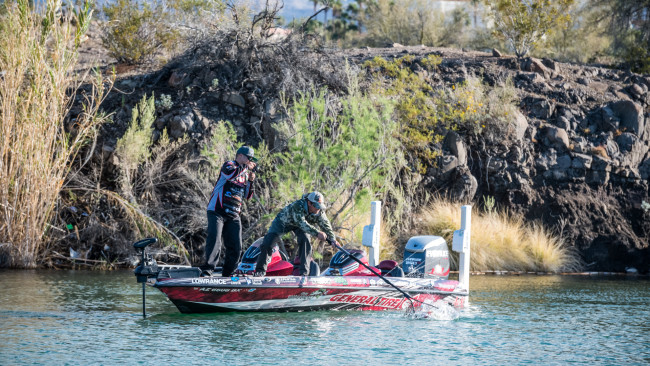 “I just knew that that pressure was going to lower later, so I didn’t panic. I had to fish really slow in the morning,” he says. “It lowered around 11, so that really helped me with the reaction stuff I wanted to do. I do not like finessing them. I think you can catch better fish on reaction, but you don’t always get to do it. But later in the afternoon, I was counting on that. Luckily I was right about making that judgement call.”

“What you saw this morning was post-front. Basically, post-front is anything after the storm that increases the pressure. Usually, that calls for a tough bite,” he explains. “That’s what a lot of guys were dealing with. Knowing that, I didn’t go in and try too much of a reaction bite or expect too much out of it. So my confidence never really dwindled because I was kind of expecting it.

“But when that pressure lowered around 11 o’clock, which I could tell when the lower clouds pushed in, things like that will actually pick up the reaction bite.”

After that point, Au just went fishing. He caught fish Neko rigging a Daiwa Yamamoto Neko Fat and Yamamoto Senko. He caught one on a ChatterBait. When the sun popped out, he flipped tules, using a fast presentation to take advantage of the falling pressure. It was a total mixed bag.

Aside from understanding barometric pressure, Tai focused his efforts on areas where he visually located quality bass in practice – a tactic he devised to take advantage of the lake’s clear water. It obviously worked, and he’s around the right fish to have a shot at the win.

“I caught nothing sight-fishing,” Au says of today. “I’m hoping tomorrow things clear up a little bit where I can see them a little better and actually get to ‘pick out my friends’ tomorrow. I’m just going to swing for the fence. I think this is my 14th or 15th top 10 regional event, and I just want to seal the deal and get that monkey off my back.” 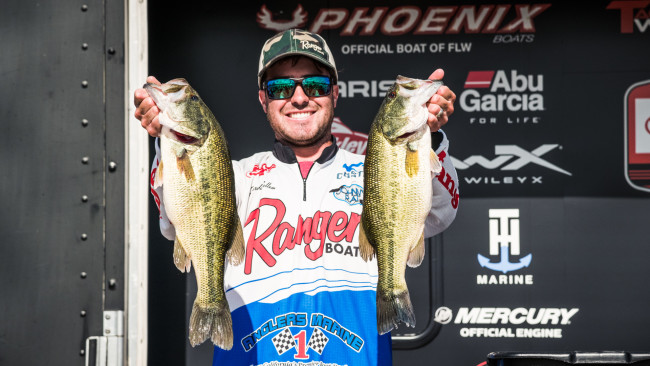 Jordan Collom maintained his second-place standing today, but instead of trailing by just 2 ounces like yesterday, he now trails by 1 pound, 8 ounces. That normally wouldn’t be a major hurdle to overcome, except that Au seems pretty dialed, and Collom had to scramble to catch 16 pounds, 13 ounces.

“Today was a lot tougher,” Collom says. “I started off fishing an area where I saw a great big one, and she wasn’t there anymore. There was, like, no fish there, so I started fishing a little deeper with a heavier stick worm. I got a 4-pounder right off the bat, and then I scratched a limit the rest of the day. I thought I had less, but 16-13 I’m pretty happy with.”

Collom believes the fish backed off from their bedding areas to secondary points. He says he doesn’t really have a plan for tomorrow, except to return to his best areas and try to piece together the pattern of the day.

“There’s like a 4-pounder that I’m going to start on that’s real spooky, so hopefully I can get her to go early. But other than that, I’m just going to go fish.” 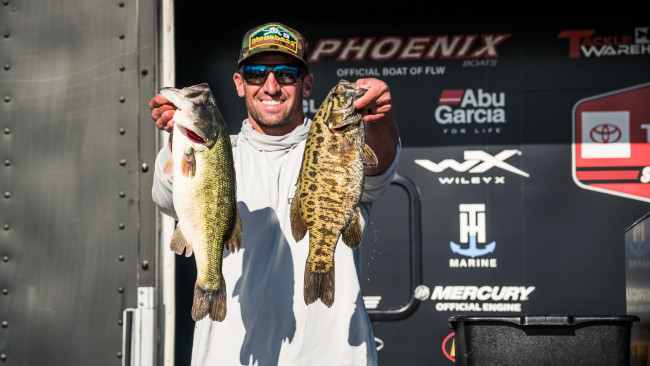 Yesterday, Michael Caruso caught some fish sight-fishing and some “just fishing,” meaning he targeted whatever looked good with whatever bait he thought would work. He was able to catch fish with both approaches. Today, he was not.

“Just fishing today was really tough,” he says. “It wasn’t good. Yesterday, fishing was pretty good. If I didn’t know there was a fish there [today], I couldn’t catch one. I sight-fished three or four of my fish, and then a couple other ones I just fished in the area where I knew they were, and I ended up catching ’em.

“The water is changing quickly. It’s getting really dirty, and these fish are sight feeders. That makes it really tough. I’m just going to try to find clean water tomorrow and just kind of run around.”

Four of Caruso’s keepers today were bass he found yesterday. He’s got a couple left for tomorrow,but figures the water clarity will ultimately determine how he finishes.

Of note, this is Caruso’s fifth top-10 finish with FLW. His dad, Kevin Caruso, earned his first-ever FLW top 10 this week. Kevin will start Saturday in seventh place. 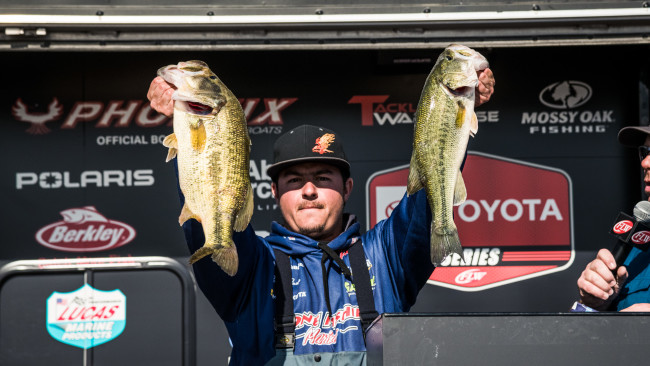 Tanner Austin has spent the entirety of his tournament so far fishing one area from the opening bell to the final whistle. It’s a crowded area, but he’s using a slightly different approach than the competition. One key aspect that he shared is he’s using a painfully slow presentation.

While this is the first tournament Austin has fished at Havasu and he isn’t really familiar with the lake, he’s pretty sure there’s a good population of resident fish in his area, plus more coming to him. In his opinion, it’s getting better.

“I think I can catch five decent ones again tomorrow,” Austin adds. “It’s a tough grind. It’s really hard to catch them.” 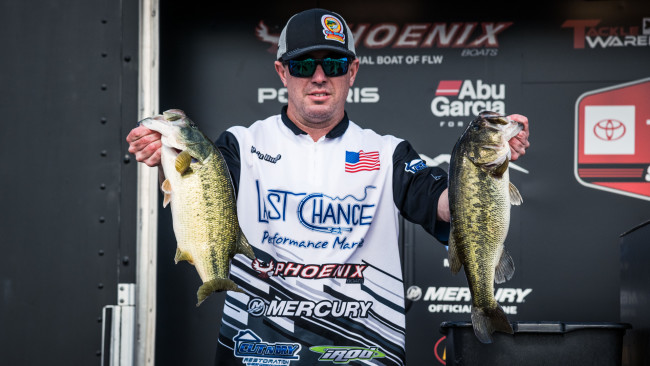 On day one, Kevin Hugo bed-fished almost all day long. Today, he had to make a change.

“I caught my first one on a bed, and then I found some stained water and just went flipping,” he says. “I caught the majority that way. I probably caught 10 keepers.”

Hugo is pretty dialed on a pattern, despite the necessary tactical change.

“I can see it from far away. I’m just looking for a rock and tule mixture. That’s where the big ones seem to be.” 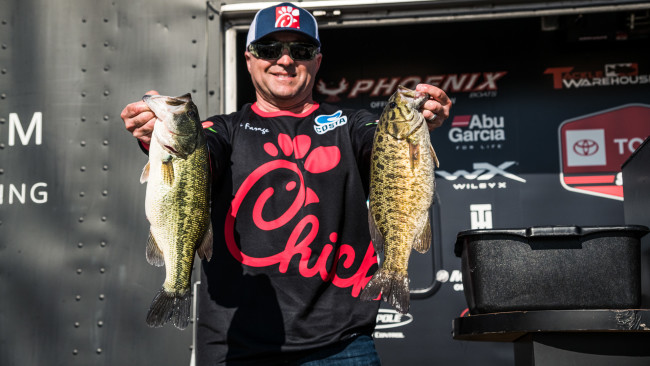 Since 2013, Jack Farage of Discovery Bay, Calif., has won four Toyota Series tournaments. Today, after catching 14 pounds, 11 ounces, Farage took over the lead on Lake Havasu with one day to fish. His two-day total is 30-4.

“I’ve been so blessed. I want to thank the Lord first of all,” Farage says. “The biggest thing is I kind of try some reaction stuff first thing in the morning and see if that goes. If it doesn’t go, then I go right away into finesse fishing and throwing tubes, drop-shots and just kind of feel out the area until I get a bite. And then once I get bit a couple of times I stick to that pattern.”

Today, Farage started out throwing a swimbait behind pro Travis Bounds, who was throwing a spinnerbait. Farge caught a few good ones that way.

“Then it just shut down for an hour. I started throwing a finesse bait behind him while he was throwing a spinnerbait, and it was tough to do that. But I was able to make a long cast and hook one on a tube. Probably another 20 minutes later I got another one, and I got him to slow down. And then it was on. I got to fish the way I wanted to. It was cool.”