Co-angler Farage Gets Win No. 5

Californian wins by an ounce at Lake Havasu 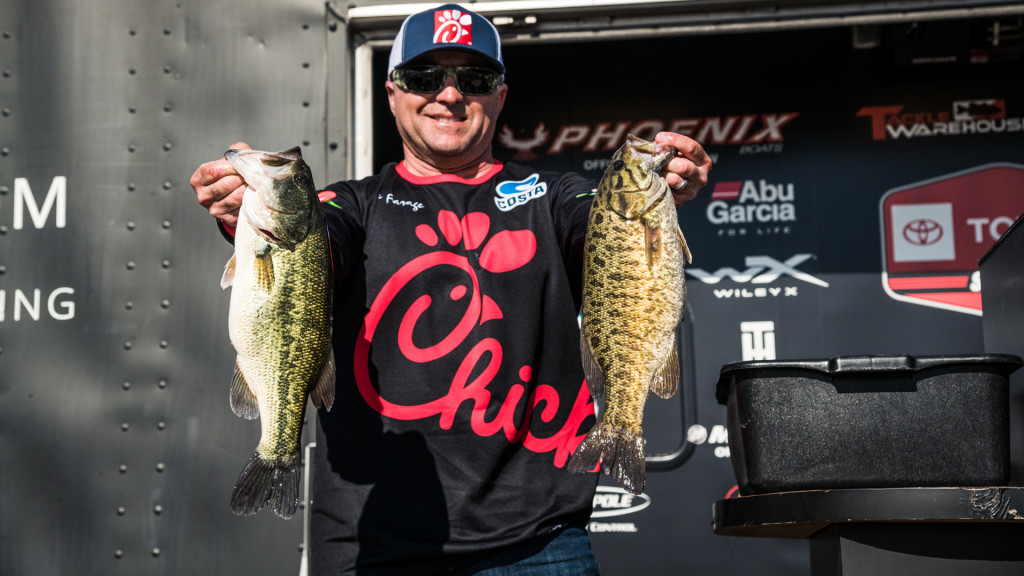 If you weren’t already aware, you need to be paying attention to the name Jack Farage. This week, the Discovery Bay, Calif., co-angler won his fifth Toyota Series Western Division tournament since 2013 by catching 43 pounds, 3 ounces at Lake Havasu. For his latest win, Farage earned a Phoenix 518 Pro with a 115-hp Suzuki outboard.

“I feel, just, ecstatic,” he says. “I’m so blessed to win another one. These are so hard to win off the back of the boat. I’m really excited, because I have a feeling that I do have what it takes to do it in the front. Believe me, I want to do it.”

Farage has won a boat on basically every fishery where he’s competed. A lot of his success stems from putting in practice time on his own, as well as a strong angling instinct.

“I can read the water pretty good,” he says. “I can read the pro’s style of fishing. Today was one of my toughest days, I would say, fishing behind somebody because where I found my target zone was where the break is [where you lose visibility to the bottom]. When your pro is riding the break, it’s very hard to fish the break. You basically have to fish behind the boat.

“But I’m not complaining. Everybody is in the same boat, and I’m here to learn. I’m not competing against the pros. My pro from today [pro champ Tai Au] was just incredible. I just learned so much from him. Him working so hard today just made me work hard. That’s why I’m up here like this today.”

In practice, Farage visited some community holes where he knew there were fish and simply spent time trying to dial in a handful of baits to use in the tournament. He wound up catching most of his weigh-in fish on a Keitech 3.3 and 3.8 Swing Impact FAT, a 6-inch Roboworm Straight Tail Worm (margarita and oxblood) on a drop-shot and a tube.

“The tube I mix in when I can’t get them on a drop-shot,” he adds. “For me, it’s more like in between finessing and a jig, and sometimes they eat that better.”

They ate it just well enough. Farage topped second-place co-angler Ty Faber by only 1 ounce, raising his career FLW winnings to more than $171,000.