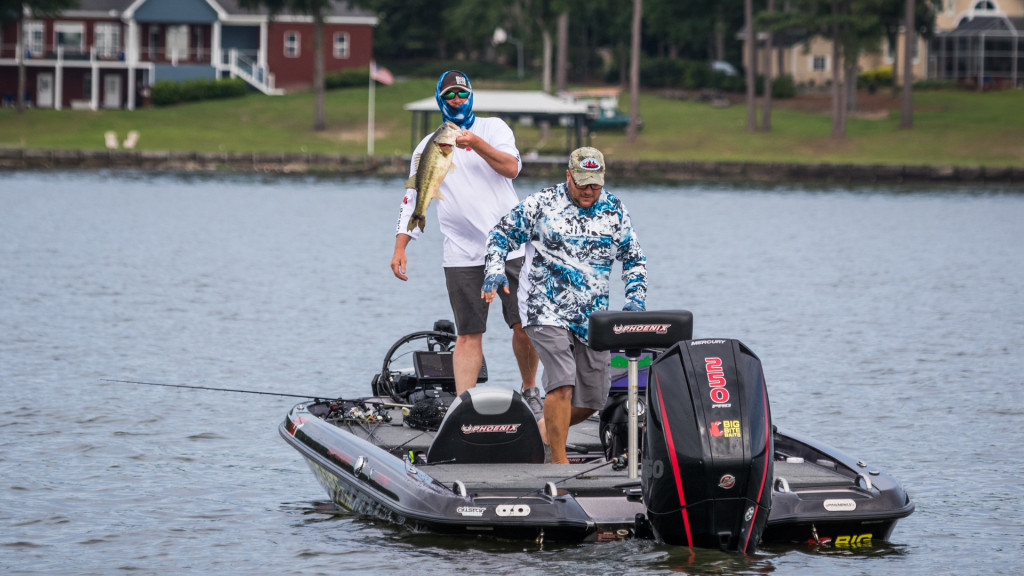 Michael Smith established the pace at the Toyota Series Southeastern Division event on Lake Eufaula with a five-bass first-day limit that weighed 25 pounds, 7 ounces. He leads a crew of mostly offshore sticks that are mining Eufaula’s brush piles and ledges for some seriously big bass. Though, it’s worth pointing out that several in the top 10 did catch some or all of their keepers up shallow today.

Here’s a rundown of the top five after one day of fishing. 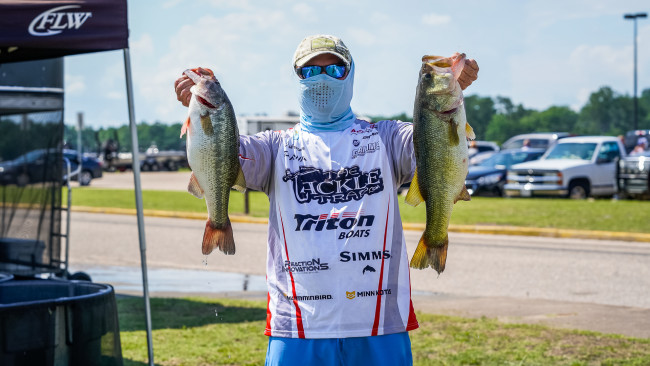 Coming into the tournament, Josh Stracner’s name was being tossed around as one to watch for in the standings. Stracner, of Vandiver, Ala., which is about three hours north of Eufaula, came through on day one with a second-place effort worth 23 pounds, 9 ounces.

“Everybody’s fishing deep. Everybody’s out on these ledges. That’s how I caught mine,” he says. “I caught ’em early. I caught ’em late. Seems like that middle of the day you can’t hardly get a bite.

“They’re not pulling water ’til 1 o’clock, and it really doesn’t trigger the fish until about 2,” Stracner adds. “So we pretty much miss it. I did get on a little flurry and caught my two best fish in the last 10 minutes.”

Stracner says the fish have been out on the ledges for a couple weeks, and he knows where to find them. The biggest hurdle is having to share water with other ledge sticks.

“You’ve just got to run the whole lake and fish a bunch of places,” he says. “I was lucky to get on the place I wanted to start on. I caught about 18 pounds on it. I don’t think I got on a fresh school the rest of the day. I was shooting for 20 pounds, and I had about 20 pounds until the last 10 minutes and caught my biggest fish in the last 10 minutes and had to go. Tomorrow, I’m going to miss that late bite and really don’t know what to expect.” 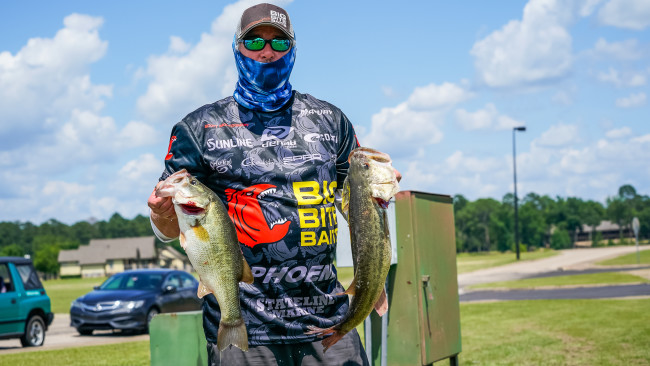 If you checked the midday update article on the FLW website today, you saw a photo of Eufaula local Scott Montgomery steering a tail-walking 6-pound, 10-ounce bass into the net. That fish (also shown as the lead image in this article) earned Montgomery the day-one Big Bass prize and helped him claim a spot in the top five.

“I’m just running down the lake looking for points in real deep water; anywhere that tops out in about 20 foot and goes off into about 40,” he says. “I’m trying to find them ganged up on points and throwing a few different baits. I was throwing a Strike King 10XD. I threw a 7-inch Suicide Shad [swimbait] by Big Bite Baits. And I’ve been rotating an 8-inch finesse worm. Like, if I can see the school on 360 but can’t make them fire, I’ll work them with a worm until I get them to fire. Then I’ll back off and try them again.”

Montgomery pulled his keepers from about 10 spots. He thinks some of the better schools have gotten smaller as more bass have relocated to the banks to capitalize on easy pickings with the mayflies.

“I’m not sure if I can do it again tomorrow, but I’ll sure try,” Montgomery adds. 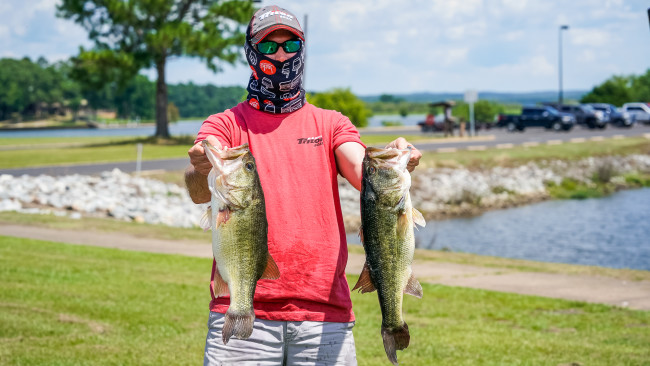 Dothan, Ala., pro Shane Powell was in the first flight and wound up being the first angler to weigh in a 20-plus bag today. Having that early boat draw was a real benefit for Powell’s offshore game plan.

“I started off fast. I caught some good fish off ledges on a crankbait,” he says. “Then after that, midmorning, it slowed down, and this afternoon it picked up again. I think it’s more of a timing thing. The sun this afternoon helped a lot I think.

“From last week to this week, there’s so many more fish out deep that I think that’s going to be the only way to stay consistent day after day is to stay out there.” 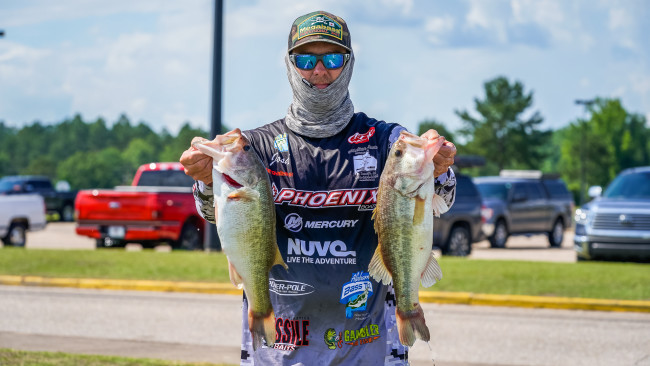 Completing an Alabama sweep of the top five, Josh Bragg started off with a limit worth 20 pounds, 12 ounces.

With a late boat draw, Bragg had to take what spots he could get. He says he “jumped on the ledges that were open” and banged away at them all day, culling another 15-pound limit throughout the day.

“I’m probably running about 50 or 60 spots,” says Bragg, who won his first BFL on Eufaula in 2017. “I’m throwing up on those ledges, and I’m giving them 10 casts. If I can get them fired up in about 10 casts, I’ll stay there with them for a few minutes, and then I’m moving on to the next.

“There was a lull between about 9 and 12. I caught them pretty good early and pretty good late. I may try to change my rotation up tomorrow [with an early draw].”