Smith Leads at Eufaula with 50 Pounds 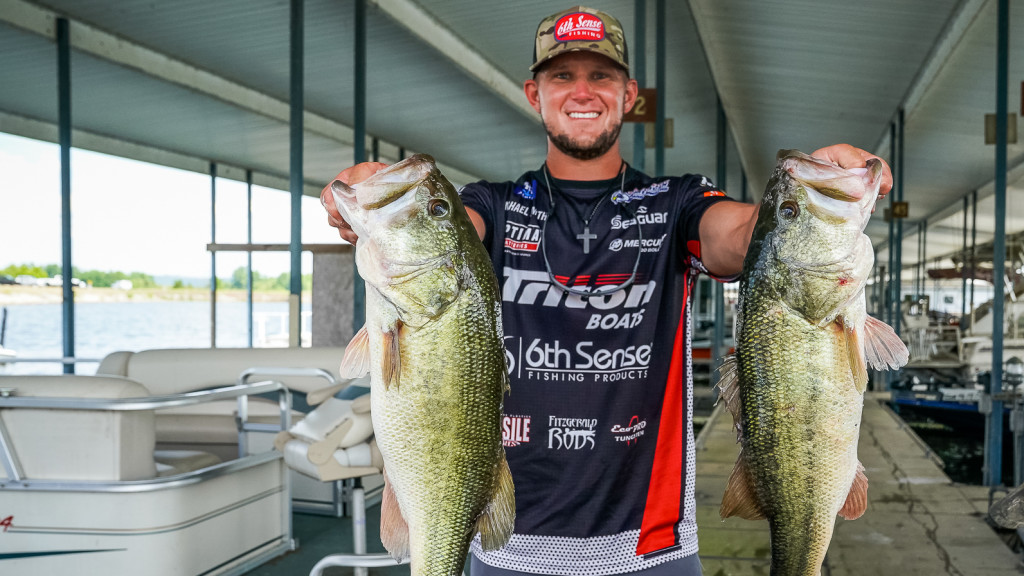 If you could pick which days you’d catch your two biggest limits ever on a lake, you’d probably want them to come on the first two days of a major bass tournament, right?

Well, Michael Smith can attest to just how fun it is when the dream scenario occurs. Competing in the Toyota Series Southeastern Division event at Lake Eufaula this week, the Andalusia, Ala., pro weighed in 25 pounds, 7 ounces yesterday to take the lead and backed it up with 24-9 today. His 50-pound two-day total has Smith ahead of second-place pro Scott Montgomery by 5 pounds, 9 ounces.

“It’s been a magical week,” says Smith. “Those are the two biggest bags I’ve ever weighed on Eufaula, and they were back to back. I picked the right week to figure it out. I put a lot of time in and found a lot of good places. I could’ve probably had a bigger bag. I jumped off a 4 1/2 and broke one off today that I couldn’t even get off the bottom. So, I don’t know. I’m cautiously optimistic.

“I said yesterday I had about 30 places to hit and only hit 15 to get to what I had, and I probably only hit 15 again today. I’ve still got some places that I haven’t even hit in the tournament. The places that I have been catching them I haven’t pressured at all the last two days. I’ve pulled up, caught two or three, and then left before I’ve broke the schools up.”

Smith is targeting schools of bass on offshore ledges. Today, he couldn’t even get on the four schools that were his best from yesterday. There were boats on them this morning, and he never needed them in the afternoon.

“We’re going to hit every one of them tomorrow,” he adds. “I’ve quit fishing every day at 12 because it’s hard to cull 4-pounders. Tomorrow, there’s only going to be 10 people out here, and we’re going to burn ’em to the ground.”

Smith is fishing a combination of moving baits and slower soft plastics. The moving options are working well early in the day, but he slows it down midday once the lull sets in.

He also thinks he’s got some “sneaky” places on Eufaula that his competition might not have found. That’s one explanation for why he’s catching 25 pounds a day and some of the other sticks in this tournament, all of whom seem to be sharing schools, aren’t able to keep the same pace.

“I think just having a lot of places is key,” Smith says. “And some of it is probably just being fortunate to not get in a bad rotation. If you get in a bad rotation and you’re fishing behind people all day, you’re going to be having a tough time and wondering what’s going on. I think hitting as many fresh places as you can early while they’re biting is key. Almost every one of those fish I weighed in was the first cast I made on the place that I stopped on. If you pull up and make five casts and you haven’t caught one, you need to go somewhere else. A lot of these are one-cast deals, and they’re either there or they’re not. And if a big one’s there, he’s gonna bite it.”

After opening up the tournament with a second-place showing yesterday, Hamilton, Ga., co-angler Cal Culpepper caught 13 pounds, 5 ounces today to move into first place. His two-day total of 31-7 has Culpepper just 1 pound, 6 ounces ahead of Alan Ray in second place.