Ready to Rock on Erie

Northern Division of the Toyota Series kicks off in smallmouth country 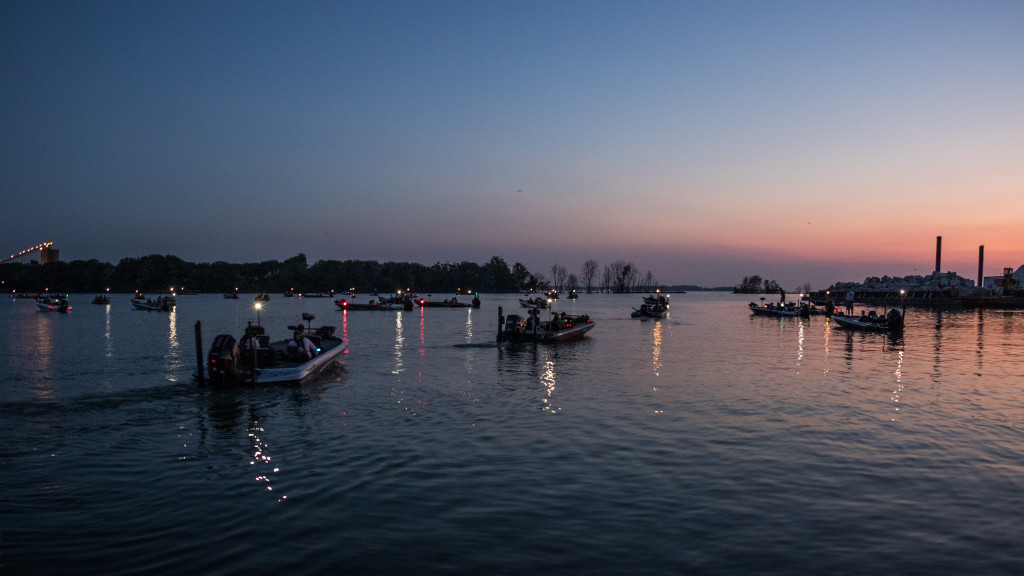 The Toyota Series Northern Division has undergone more than its share of schedule shuffling this year, but the kickoff is finally here. Taking off out of Sandusky, Ohio, on the shores of Lake Erie, the time to chase smallmouths has arrived. 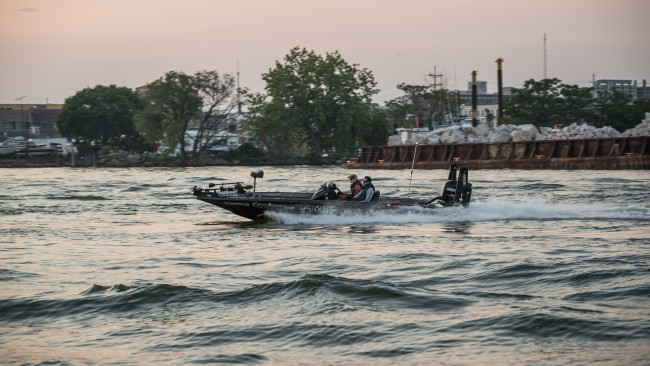 Without seeing them firsthand, it’s almost impossible to understand how vast the Great Lakes really are. Nestled in the southwest corner of Lake Erie, Sandusky is roughly 250 miles from Buffalo at the east end of the lake. Of course, by surface area, Erie is actually the second smallest of the Great Lakes (with Ontario being slightly smaller, though it holds much more water due to its depth).

Though Canada is off-limits for this event, anglers will still have plenty of good options. Just north of Sandusky, a series of islands including Kelleys Island, South Bass, Middle Bass and Isle St. George define the region and lead out to Pelee Island in Canada. To the east and west, there is also a ton of fishable water that an angler can hit without needing to leave the bank miles behind.

There is also a lot of really good largemouth fishing within easy reach of takeoff. Unlike other parts of the Great Lakes, the bays, harbors and protected stretches of largemouth water are much more plentiful around Sandusky and Port Clinton than the rest of the lake.

Furthermore, about 76 miles away from takeoff is the smallmouth mecca of Lake St. Clair. Of smallmouth tournament fisheries, none has been more impressive in recent years than St. Clair, and though the run there is pretty tremendous, it could be in play for an intrepid angler this week. 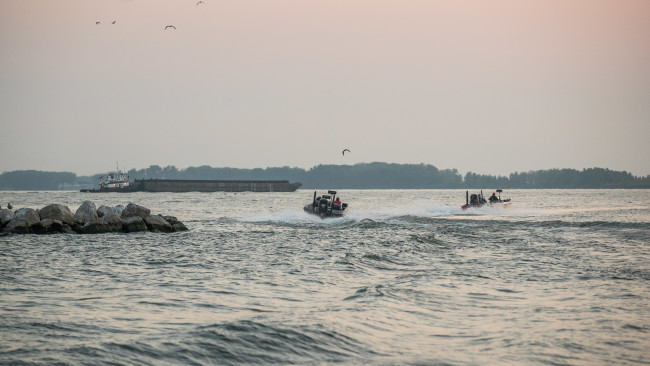 Hot weather for the last week has the fish headed into their summertime patterns, but it’s still too close to the spawn to look for a true offshore smallmouth slugfest like the 2018 event on Erie out of Buffalo.

After practicing Monday to gauge his interest in fishing the event and the state of the lake, Erie legend Steve Clapper thinks the offshore bite isn’t quite there yet.

“Today I caught seven keepers; that’s all I caught,” he says of his first practice day. “I ran around to a lot of areas, and I’m gonna go fish an area tomorrow that I haven’t fished in years, and I’ll know more then. I was happy with one area – not big ones, just 3-pounders, but it was fast and I left.

“They’re in transition right now. What I feel is the postspawn funk. There’s still fish real shallow, and I did find some in a little deeper water today. I would have liked it a lot better if it was two weeks later; then they would be out there in deep water putting the feedbag on after the spawn.”

Eddie Levin lives in Ohio a couple hours from Erie and finished second on Champlain last year. Though there’s plenty of largemouth and St. Clair chatter, he’s committed to Erie and smallmouths.

“I’ve watched some of the best largemouth guys from all around here,” says Levin. “They strictly fish for largemouth; they do not target smallmouth, and they live on Lake Erie. To catch largemouth for three days in a row, the caliber you’re going to need to win, I don’t see it happening. You might see a guy bring in a big bag one day, but a big bag of largemouths right now is 18 pounds.”

On the other hand, Levin seems satisfied with the smallmouth action he’s seen on Erie, despite there still being a few straggling spawners.

“I’m gonna stay in Erie,” Levin says. “With me living here, I know what caliber [fish] lives here and how you can get rich in a hurry. These things are goby machines. They’re literally putting on weight as we talk. You can see it from last week to this week.”

“Right now, you’ve got fish in a foot of water, all the way out 25 feet,” Levin adds. “They’re all spread out, with kind of the weird summer we’ve already had, you can catch them doing anything you want to do right now.”

Scott Dobson is considering going to St. Clair but has put some time in on Erie. The 2019 Strike King Angler of the Year in the Northern Division, Dobson is regarded by some as the best smallmouth angler in the world.

“I hear guys say they’re catching 4-pounders, but me, personally, I haven’t caught one fish over 4 pounds down here in the Ohio waters of Lake Erie,” says Dobson. “You really can’t put together much of a pattern, other than you catch one here, one there, and move on. It’s pretty much postspawn in Ohio; a lot of them just gone done spawning and they’re not super aggressive.”

Very warm and calm weather has defined practice to a degree, but there are a few other factors worth mentioning, if only to set the parameters. One is that the water on the west end of Erie is clearer than many have seen it in years, with visibility of 18 feet or more being quite common. The other for sure factor is that the fishing in St. Clair, more than 70 miles away, is on fire. Dobson reports excellent fishing there, and recent tournament results from the Canadian side are simply tremendous.

As for today’s weather, it looks really good, with plenty of sun and calm winds on the table. The wind the rest of the way looks good as well, but it’s not wise to count your chickens too far in advance on the Great Lakes. 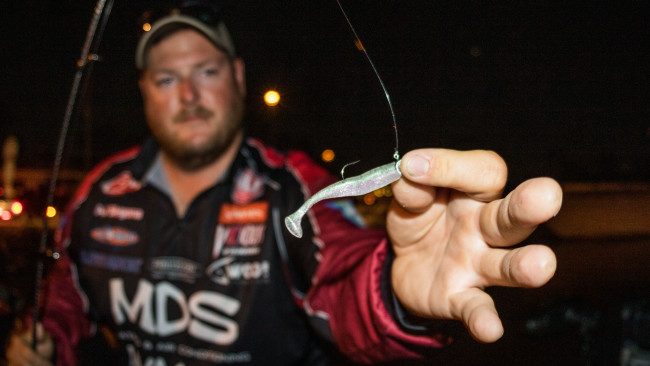 If largemouth play, you can look for anything from a crankbait and a jig offshore to frogs and flipping in grass up shallow to produce. The bays and harbors of Erie have a lot of good cover in them, but the superlative smallmouth fishing is likely to be hard to match, even on a down week.

For smallmouths, the full gamut of Great Lakes techniques is on the table. Dragging tubes, Ned rigs and drop-shots in deep water will be prime for summer fish. For the shallow fish, a jerkbait, swimbait or spy bait could produce big weights. 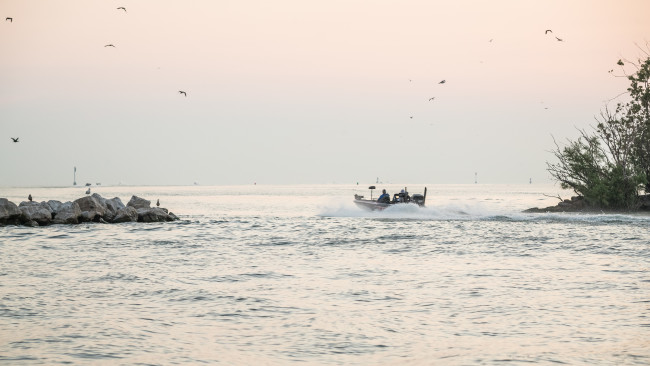 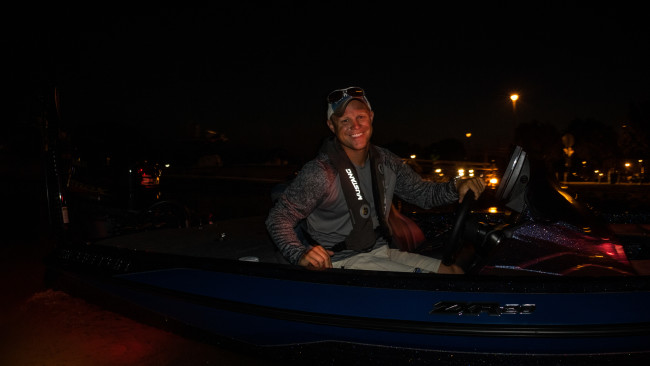 The idea of largemouths being a factor is interesting, but the dominant storyline of practice has been curiosity about St. Clair.

“It’s definitely not out of the question,” says Dobson of potentially making the run. “It’s a big run; it’s not like when I ran 80 miles on the St. Lawrence, when it was all river and flat calm. It’s totally doable, but the wind needs to be light and variable. If you get a good wind, it could be painful. In a pipe dream, I’d like to make that run one of the days or both of the days. St. Clair is on fire. It’s always good; it’s historically been a good lake, but now it’s incredible and probably the best I’ve ever seen it.”

Clapper, the smallmouth king before Dobson, is an Erie legend and has made the St. Clair run in reverse a number of times.

“You’re talking about a very long run. I have done that from Harley Ensign, which is up at the top end,” says Clapper. “You can do it, but you’ve got to be on ‘em. You’ve got to catch them quick; there’s no fumbling around. But, you take a guy like Scott Dobson – there’s not a doubt in my mind that’s where he’s going. I don’t know that for a fact, but I know Scott fairly well, and he’s definitely one of the top guns there.

“With the warm weather like this, every big pleasure boat on the Detroit River will be out. The run in the morning will be all right, but they’ll get their eyes beat out on the way back. And, if we get any wind at all, you’re talking about a jaunt back here. It can be done, and I’m sure there are guys that are dialed in, but when you run that far, there are a lot of things that can go wrong.”

For weights, the gathering point in Erie seems to be around 20 pounds or better a day, but AJ Slegona thinks the top end potential for St. Clair could throw things off.

“It’s really hard to say what it will take to win because you have to factor in the guys that are running to St. Clair,” he says. “If someone can successfully make the run every day, I think they could legitimately bring in 75 pounds for three days. If it’s won out of Erie, I think mid-60s will take the win.”

For his part, Clapper also likes the idea of 60 pounds.

“If somebody would give me 20 pounds a day right now, I’d stay at the house,” says Clapper. “These guys are good, and if you get on the right deal where some early spawners moved out that could happen. They’re here.”