Mitchell Swings into the Lead on Erie 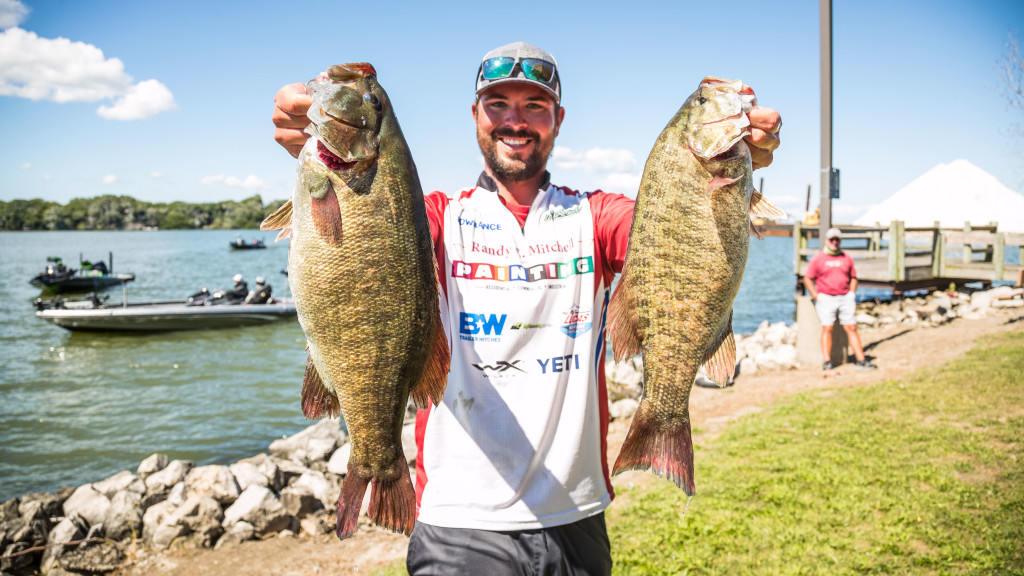 Day two of the Toyota Series Northern Division event on Lake Erie was tough on some, but it was a party for Kurt Mitchell. Weighing 24 pounds, 11 ounces, he moved up from second into the lead with a 44-10 total. Only the top 10 fish on the final day and they’ll have a steep hill to climb to catch Mitchell.

“It was pretty unbelievable,” says Mitchell. “I started off the day and caught about 21 pounds in the first hour and a half. Then I left that spot, and I went to my best area, and I saw fish all over the graph. I caught one and my co-angler caught a 4, and we left it to save it for tomorrow. Then I hit one more hard spot, and caught two more and then I caught a 6-pounder, so I just came in.”

Fishing shallower hard spots in about 10 feet of water, Mitchell added to his pattern today.

“When they’re not on the hard spots, I couldn’t figure out where they are going,” says Mitchell. “Today, I drifted way off the spot, and there’s one little strip of rocks, and they’re set up right on the backside of them. That’s where they were today.”

Mitchell’s secondary rock is in about 16 feet, so still fairly shallow, but it proved to be a difference-maker today. Like on day one, a Yamamoto Shad Shape Worm on a drop-shot did damage, but today he mixed in a Ned rig as well.

Mitchell has earned over $200,000 with FLW and fished the Tackle Warehouse Pro Circuit for five years, but this is his best shot yet at a win.

“I feel pretty good,” says Mitchell. “The one area, it’s a big strip of rocks, it looks like an underwater jetty, and those fish stay there all day. The hard spot areas, they’re hit or miss, but I’ve got at least one spot I feel really confident in and two spots that could be really good.” 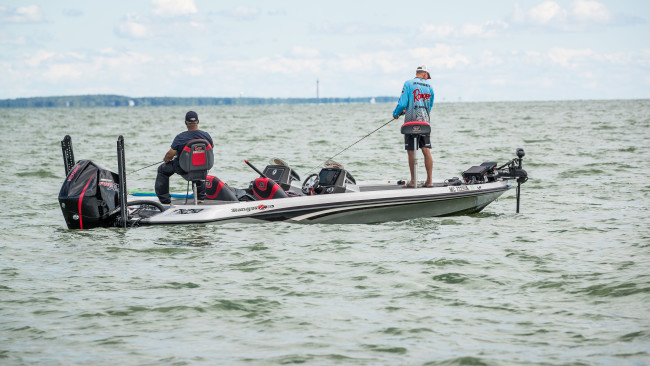 In second place, Randy Ramsey is a tick more than 6 pounds behind Mitchell, but that doesn’t mean he hasn’t put together a great tournament. Notably, he’s also doing it with mixed bags, having weighed some largemouths and smallmouths each day.

“I’m fishing isolated cover, kind of away from a lot of stuff,” says Ramsey. “There are so many places you can fish with hundreds of boulders and rock piles, but the stuff I’m fishing, there isn’t anything around it. Now, I’m down to three main areas and everything I’m doing is finesse – Ned rigs, and some Texas rig stuff and a finesse jig when I’m largemouth fishing.”

Running west of takeoff and staying in Erie, Ramsey is fishing some deep stuff, in about 20 feet, as well as one shallow spot in about 12 feet. Catching both species was part of the plan all along for Ramsey, and it’s allowed him to stay really consistent.

“If [Mitchell] hadn’t have busted 24 pounds today, I’d really be in the hunt,” says Ramsey. “You hope if one of the species doesn’t fire the other one does.” 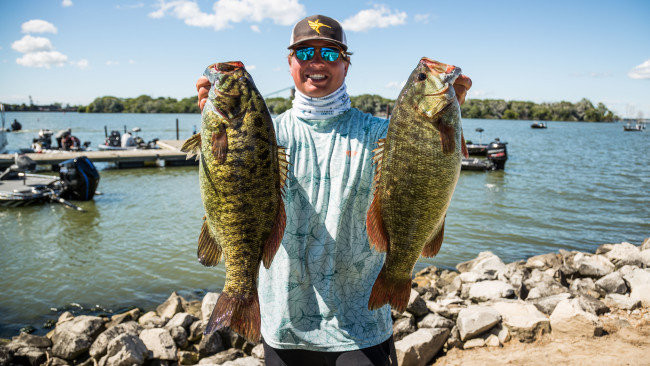 Running to the Detroit River each day, Chase Serafin just banked his second top 10 of the year in the Northern Division, but he’s facing some complications for the final day.

“I ran all the way there with no problem, then I ran out of the river and hit one spot in the mouth of the river, caught a 4-pounder, and went to take off,” says Serafin. “My motor kinda missed a step, trying to get on pad, and I couldn’t get on plane.”

Serafin ended up getting a ride back to takeoff with Scott Dobson, but his boat situation is a little in question for the final day. However it shakes out, he’s planning on running west again, but maybe not into the Detroit River.

“We ran down to the same spot I fished yesterday, and I hooked a good one on the first cast and lost it under the boat,” says Serafin, who is starting on a river ledge in the Detroit River. “Then, I caught three fish on three casts, and I thought it was going to be lights out.”

Unfortunately, it slowed down from there, until Serafin and his co-angler fired them back up. Then, Serafin went to work with a Rapala DT14 and DT20 to catch the bulk of his weight. Catching about 25 keepers, he did all he needed to stay in the top five. Still, he’s not even sure if he’ll go back to that spot tomorrow.

“I knew the high-end of that spot was 18 to 20 pounds, but in pre-practice, I found some stuff in Michigan in Erie,” says Serafin. “Now that I’ve got myself in the top 10, I might go over there and try to get five bites, because if I do, they’ll be big ones.” 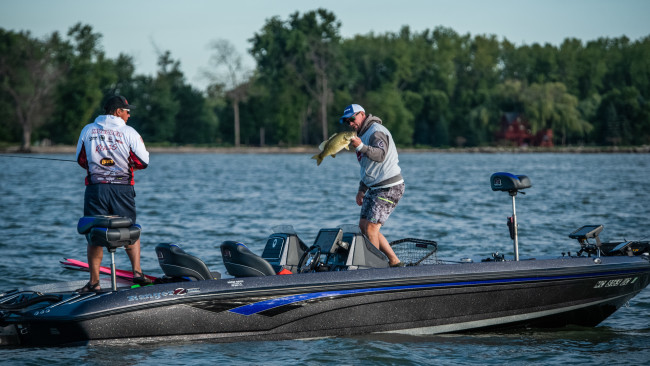 Mike Trombly, who is actually staying with Steve Clapper for the tournament, put another solid day up, but it didn’t go nearly as smoothly as day one.

“It was a very tough bite today,” says Trombly, who is running west from takeoff. “I only caught four fish in the areas where I was catching them, we definitely had to grind them out. My mian area had mudded up a little bit, hopefully tomorrow that water clears up.”

On his way back, Trombly stopped at one of the islands and plucked a 2-pounder off a boulder to fill his limit, but it still only added up to 16-9 on the day. Like on day one, he employed a tube and a Carolina rig, but he also mixed in an umbrella rig for one fish today.

“It’s gonna be a roll of the dice,” says Trombly about his prospects for day three. “It’s a matter of whether they show. The places I’ve caught my best fish in practice, I haven’t caught one yet. They’re rock humps and rough spots, and the fish can pull up easily, but they can pull off just as easily. But I will probably run a little bit more water tomorrow, if it is calm.” 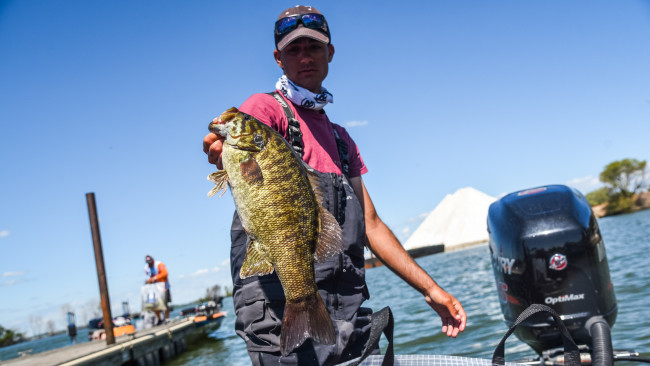 Staying pretty close to takeoff around the islands, Hugh Cosculluela has put up consistent bags to edge into the top five.

“My game plan initially was to go fish around Gull Island, but with the wind, I didn’t get out there,” says Cosculluela. “I pretty much caught all my fish around Kelley’s.”

Throwing a drop-shot and a Ned rig around boulders in 13 to 18 feet, Cosculluela is only catching six or seven fish per day, but the recent Pro Circuit event prepared him for that.

“I watched how they fished, and how many they thought were in an area,” he says. “I watched Boyd Duckett and Grae Buck fish the same hole for an hour, and I think if you find fish, there are a lot there, but I probably dropped on 10 fish today and didn’t get a single one to bite.”

Notably, Cosculluela is from Texas, and he’s really enjoying the northern summer.

“My grandparents have a house in western Michigan, and it’s a little hot in Texas,” says Cosculluela. “I think the “feels like” temperature where I live was 111 degrees today.”