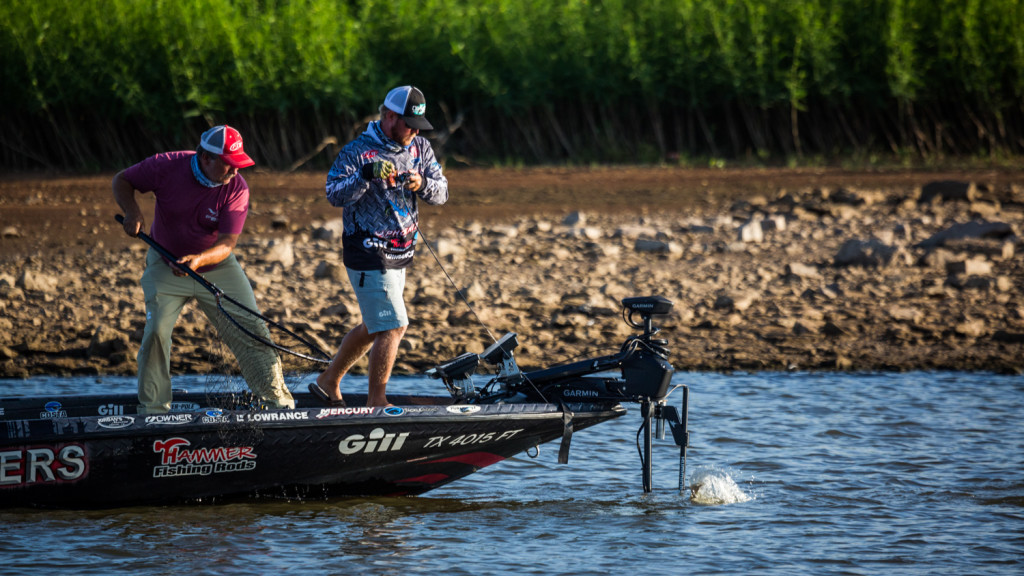 Competitors in the Toyota Series Southwestern Division event at Fort Gibson Lake awoke to a completely different waterway than the one they fished yesterday. While day one brought overcast skies and a bevy of baitfish to the surface, day two screamed bluebird skies from the start and has settled into a mostly sunny blanket of blue towards midday.

The majority of the field ran up the Grand River today. For miles, the banks of the unusually low Grand are dotted with FLW competitors attempting to finesse their way to a limit. As of noon, most had met with little success. Field leader Cameron Foster, who sacked 22 pounds, 11 ounces by 8:00 a.m. yesterday, was in the river-bound group with an early morning total of zero.

Boat by boat, anglers reported a solitary fish. However, a few fortunes seemed to be faring better than most. Dakota Ebare finished day one in the top five with 15-7. By mid-morning, he’d boated a fish just over 4 pounds. Jerod Keith weighed 9-14 on day one, but is culling with a 5-pounder in the boat and a limit.

Meanwhile, after taking second place in day two, Danny Weems says he’s only got one fish and is attempting to adjust to changing conditions by finesse fishing along the bluffs. Local legend Tommy Biffle was spotted in the middle of the lake with three fish in the boat. Sheldon Collings was one of the large crowd of anglers on the Grand River; at last check, Collings had boated one bass.