McCaig Moves Ahead on Neely Henry

Biggest bag of the tournament jumps the Alabama pro from 13th 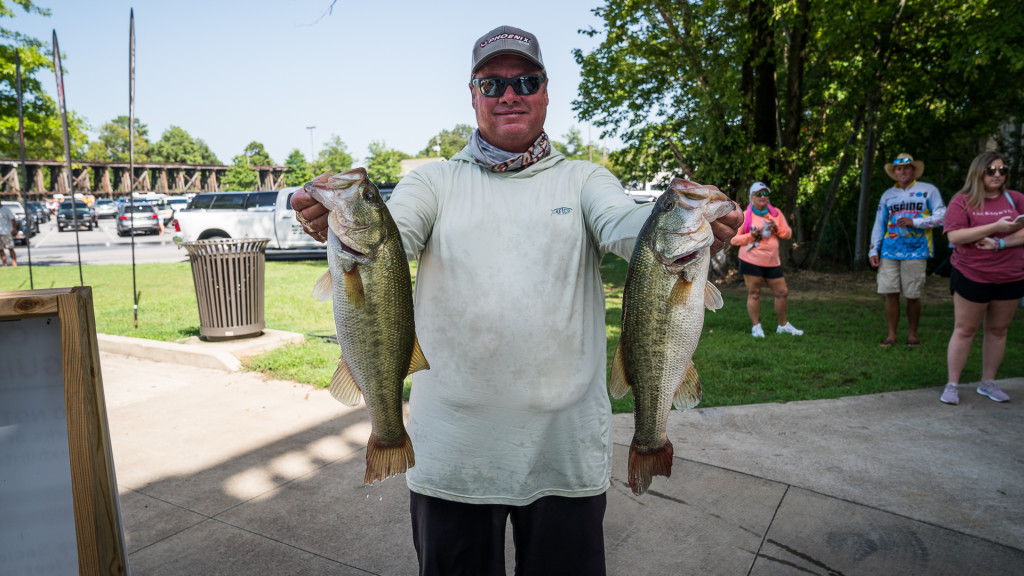 Start talking regional tournament-fishing hammers in Alabama and it doesn’t take long for the name Mark McCaig from Oxford, Ala., to come up. In the Phoenix Bass Fishing League alone, McCaig owns 21 top-10 finishes in Alabama events, including a Regional win on Neely Henry. So it came as no surprise to many when McCaig dropped 14 pounds, 10 ounces on the scales today to take the lead in the Toyota Series Southeastern Division event on Neely Henry with a two-day total of 23 pounds, 9 ounces. McCaig’s day-two limit was the biggest of the event so far.

Perhaps the person most surprised at his performance was McCaig himself, who has says he has not fished Neely Henry this time of year. In addition, everything he thought would work yesterday didn’t and today he was totally fishing by the seat of his pants.

“I’d like to say I’ve got something figured out here, but it was totally junk fishing for me today,” he says. “One of the first fish I caught today, I caught in a place I’ve never seen before: I saw some overhanging bushes in the back of a pocket, skipped a frog under there and caught a 2-pounder. Then I went out to an offshore spot, picked up a crankbait and caught a 4 pounder. Then I ran back in a creek and flipped up a 3-pounder – that’s the way the whole day went. There was no rhyme or reason to any of it." 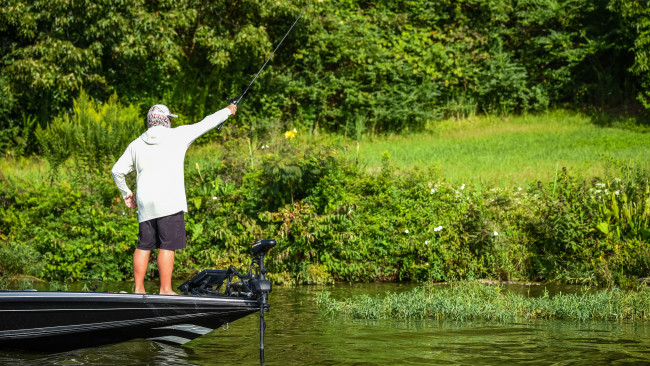 “This year I’ve really just tried fishing from my gut and it’s worked,” he continues. “Yesterday I fished more like normal, checking places that have produced in the past, and I caught 9 pounds. Today I just ran down the lake and hit stuff that looked good and felt right and it worked out a lot better.”

McCaig did say his stop offshore was based on current that started running about noon.

“I hit that spot at about 1:30 and caught the 4-pounder and a 2-pounder that helped me at the time,” he says. “But other than that, I’m fishing docks, wood and overhanging shade as I see it.” 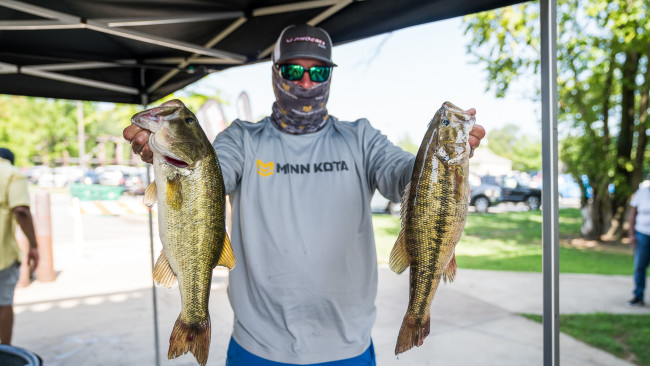 The man with the best chance to catch Mark McCaig on the final day is Derek Hicks. After a 10-pound, 7-ounce day one, Hicks backed it up with 12-7 on day two.

Hicks is making a very long run up the Coosa River each day and so far it’s working. Today he got rewarded with bookends: a 4-pound spot and a 4-pound largemouth to bolster his limit.

“I keep running up there hoping the current will run and I can catch a big bag,” Hicks says. “But it hasn’t been running at all. Today, the river was so stagnant it had that film on the surface because the water has been so still for so long. When it gets like that those fish are so hard to catch. They just get out in the middle and suspend and chase little shad out in the middle of nowhere.”

So far Hicks’ success has come by “grinding” a shaky head down river banks laden with rock.

“The bite itself is so subtle: it’s just like a ‘tick’ and then they sit there with it and don’t move,” he says. “That’s how you know they’re not grouped up because there is no competition – they eat it and sit there – they don’t have to swim with it to play keep away from their buddies.” 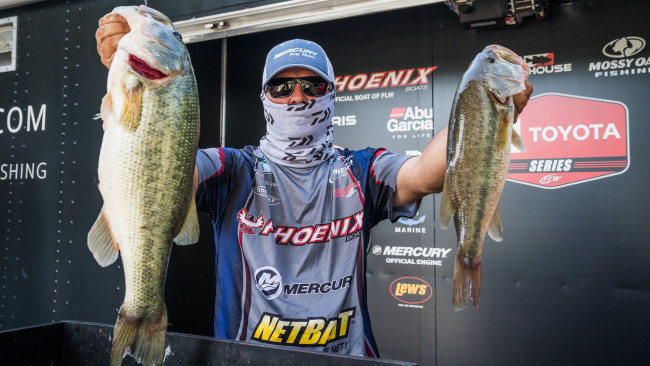 After weighing in 7 pounds, 2 ounces on day one, Kyle Glasgow rebounded today with a catch of 12 pounds, 12 ounces, thanks in large part to a 5-1 largemouth which won the big bass honors on day two.

“I came here to get out in the river and tangle with some of these spotted bass, but there has just been no current,” he says. “I’ve wasted a lot of time out there trying to make those spots bite. The water has been up and stable so I’ve had to go to the grass and play the largemouth game and it’s so random. I’m just pitching to anything that gets in my way: grass, wood, docks and whatever.

“But when you get it in front of one, they do seem eager to bite,” he continues. “That has helped me pick up the pace and stay on the move. It’s not like I’m getting in one area and needling it really slow. It’s all run and gun for me.” 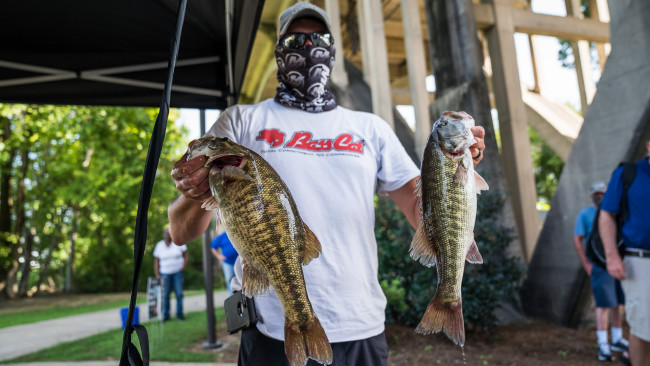 Johnson is making his living this week far up in the river.

“I gave up on it a little too early up there yesterday,” he says. “Today I pushed it 'till the last minute and at about 1:30 some current finally started moving and that made all the difference in the world. I was just casting a ChatterBait around any piles of wood jammed up off the bank and caught a few pretty quick.” 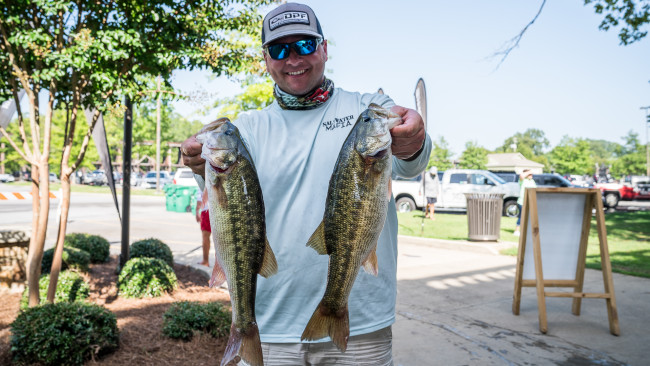 Hunter Hayes has weighed in duplicate bags of 9 pounds, 7 ounces each day to grab the fifth-place position going into the last day.

Hayes' success has come from one-two punch of topwater in the morning and then fishing anything and every later in the day.

“In the mornings I can run a willow fly or mayfly pattern on overhanging trees 'till about 10 a.m. with a buzzbait,” he says. “I’ll milk the shade as long as I can. But once that bite dies off, it’s just straight junk fishing with a spinnerbait and a big worm on laydowns, rip rap, piers – whatever looks good sticking out off the bank.” 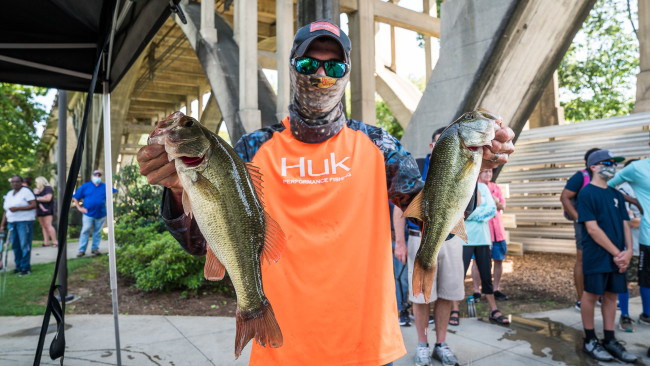 Kyle Owen of Bradenton, Fla., leads the co-angler side with a two-day total of 15 pounds, 12 ounces.

“I’ve mostly been flipping grass and shoreline cover behind my pros,” Owen says. “I’ll change up my soft plastics to make sure I’m pitching something a little different than what my pro is using to give the fish a different look.”