Oklahoma pro took the lead and never looked back 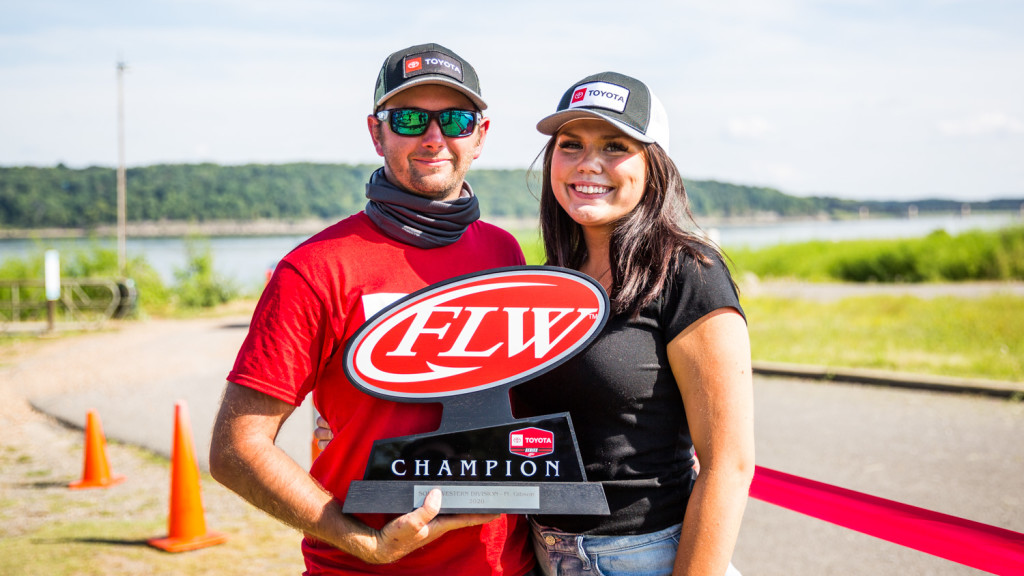 Quiet, concise and concentrated, 28-year-old Cameron Foster was shaking as he pulled a borrowed bass boat off of the water today. Behind him, the waters at Fort Gibson lapped unusually low, barely hiding submerged rocks and stumps that he almost certainly fished as a kid.

Back then, Foster was junk fishing on Fort Gibson with his grandpa, Johnny. Today, he’s hoisting a check for more than $27,000 worth of bass on the Toyota Series Southwestern Division stage.

“We were out here all of the time,” Foster recalls of his late grandfather. “Grandpa got me into fishing. Not bass fishing, but fishing in general. I picked it up at a young age from him and it has been my entire life.”

After countless close calls and top-10 finishes, that life now includes a first-ever Toyota Series title for the young volunteer firefighter out of nearby Wagoner, Oklahoma.

“I’ve been working my butt off for a long time to win something big,” Foster adds. “I always ended up coming in second or third or fourth. This…this means a lot.”

The win may even mean an opportunity to upgrade the well-worn, 18-foot Pro Craft that Foster has fished out of for 12 years. He wasn’t sure that vessel could keep up with the field this week, so he borrowed a 20-foot Triton from a close friend and used its 250-horsepower Mercury to blast his way into a first-place lead that he never relinquished.

After three days of fishing, Foster’s total stood at 56 pounds, 11 ounces. In a tournament that will be remembered for low waters and a stingy bite, Foster managed to out fish second-place Zack Birge by more than 13 pounds. It was an incredible effort that largely came thanks to a gamble. 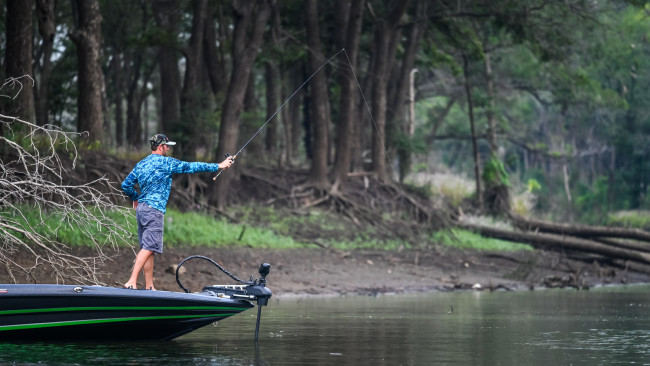 Though Foster says he’s probably walked most, if not all, of the shoreline of Fort Gibson over the years, he chose to run up the Grand River to a single bend with brush piles, pea gravel and mud. Nearly all of his keeper fish came from that spot—one he had never fished before.

“I had been catching them on the lake [in practice],” Foster tells. “But I knew 80 percent of the field was going to be fishing the lake, so I needed to find some different ways to get a big bite. I hadn’t seen a 4-pounder out here in weeks, but I had seen a lot of 3-pounders. So, I knew if I could get 13 or 14 pounds in the boat and get a kicker fish that I would be alright, and that was my goal.”

Foster found the fateful honey hole the weekend before the tournament. He rolled up, shook about 20 fish off—including two big bites—then left.

“I didn’t know what was there,” he recounts. “Or if anything else was there.”

Now, he figures that hole is just about fished out after three days of pounding through tough conditions that left many experienced anglers in the field scratching their heads. While most of the field chased shallow fish with topwater baits, Foster enticed bass hugging the bottom with a 1/2-ounce Okeechobee craw Bass X football jig with a wire weed guard and a green pumpkin Strike King Rage Craw trailer.

Foster guesses that fish in the area see a lot of jigs with weed guards, but very few with the two-pronged wire version he utilized this week. That primary bait, along with a white, 1/2-ounce Z-Man ChatterBait with a white 3.8-inch Keitech Swing Impact FAT trailer did the majority of Foster’s damage throughout the event.

The spot was so productive that only four of Foster’s 15 keepers came outside of the bend. 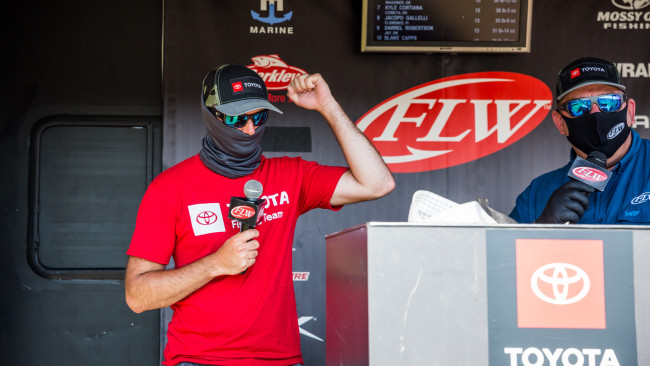 For Foster, today’s win is the culmination of years of work on the water and countless hours of studying off of it. And, it’s a double victory of sorts. In less than a month, he’ll finally start work at a dream job: a full-time position as a firefighter in the city of Muskogee, one that required a year of intense preparation, as well as EMT and firefighting classes. However, the job means Foster’s podium finish comes with a bittersweet price.

“I will be on probation for the next year, so I won’t be fishing a lot of multi-day tournaments,” adds Foster. “After a year passes, I will be able to take off days and get back to fishing again.

“It’s a dream come true,” Foster says of the win, the job and getting it done this week on the lake that meant so much to him as a son of Wagoner.