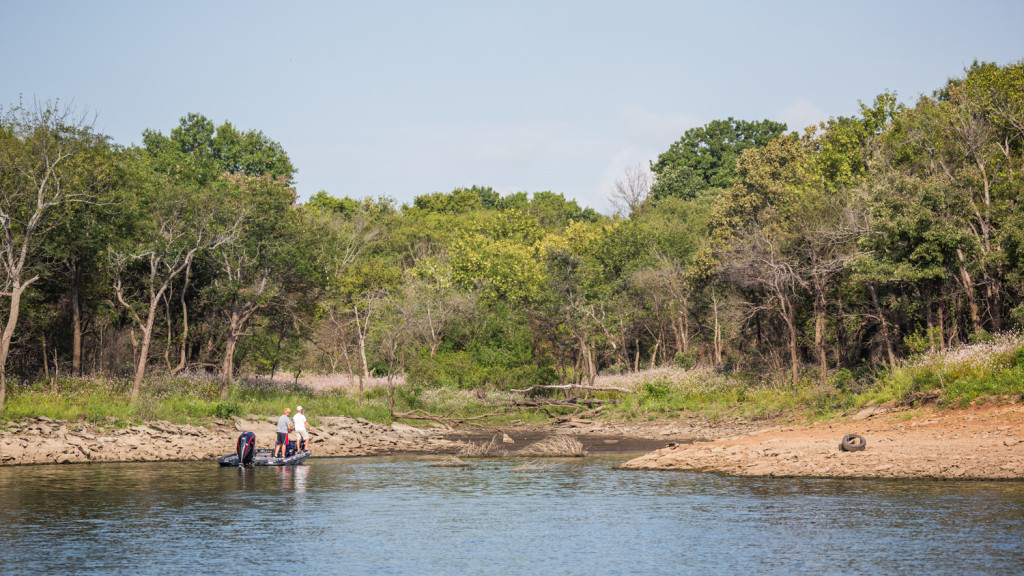 The beginning of September helped mark the start of the fall transition in the south and that is exactly what the field faced in the Toyota Series Southwestern Division event on Fort Gibson. From topwaters to soft plastics, the top 10 utilized a large chunk of Fort Gibson to catch their fish, with the Grand River paying the biggest role in the division’s second stop of the season.

Local ace Cameron Foster did his damage up the Grand River en route to the biggest win of his career by targeting a single bend in the river that contained submerged wood, pea gravel and mud. The river wasn’t quite as kind to others in the top 10, but still, they got it done during a tough time on Fort Gibson.

Here’s a look at how the rest of the top 10 pros solved the Fort Gibson puzzle. 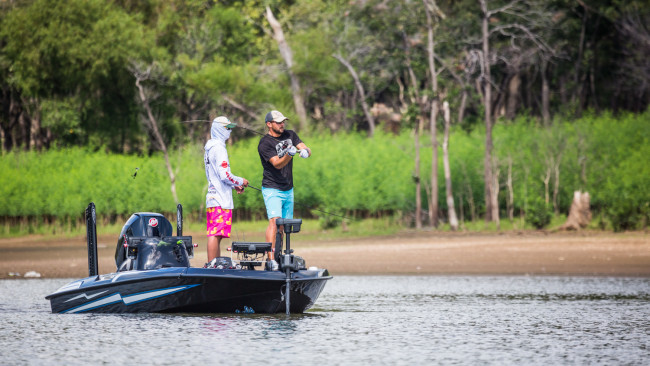 “I wasn’t getting a lot of bites,” Birge says. “But when I would get bit, it would be a good one.”

Birge says his game plan revolved around covering as much water as he possibly could, noting that most of his bites came in a foot of water or less. Birge says he was running less than 5 miles from the ramp in either direction each day. 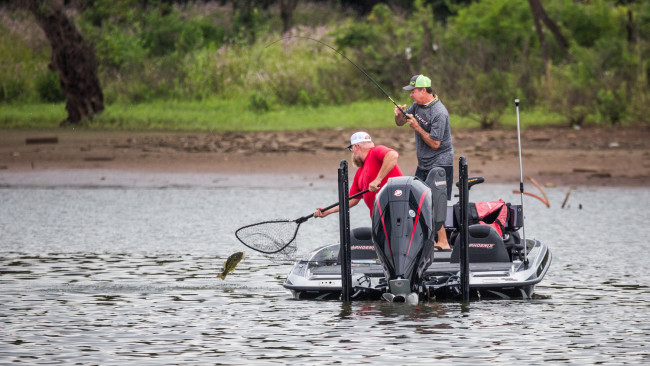 3. Hawkins leans on topwater for limits

Corsicana, Texas-based Terry Hawkins hauled in $9,321 for his third-place showing at Fort Gibson. His pattern remained the same each day, and it’s one that will sound familiar to students of the game.

“I had a point that I would start out on every morning,” Hawkins says. “The fish would push shad up there almost into the dirt. Then, I’d start out with a [Heddon] Zara Spook and try to catch a limit.”

Each day, Hawkins was able to secure a limit on the point, though he says the fishing got slower as the tournament progressed.

Hawkins says he had to work the Spook slow, like bed-fishing, as he followed the wakes of moving bass and attempted to aggravate them into a strike. 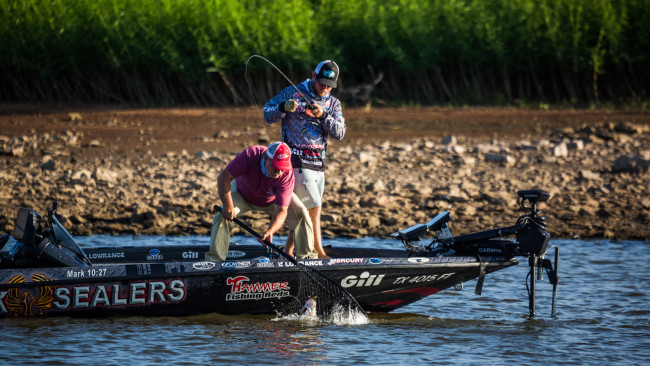 4. Ebare chases them up creeks

Dakota Ebare spent the tournament dialing in the fall transition in the creeks. With overcast skies, he deployed a black River2Sea Whopper Plopper in the 110 size. Though once the sun popped out, he switched to a green pumpkin Gene Larew Biffle Bug.

“The fish were making their way to the backs of the creeks,” adds Ebare. “Sometimes, they would be back farther in one creek than another, but for the most part you could fish from the front to the back and find them near the front or in the mid-section of the creeks or on flat points.”

Ebare says nearly every fish he caught was in 1 foot of water or less. 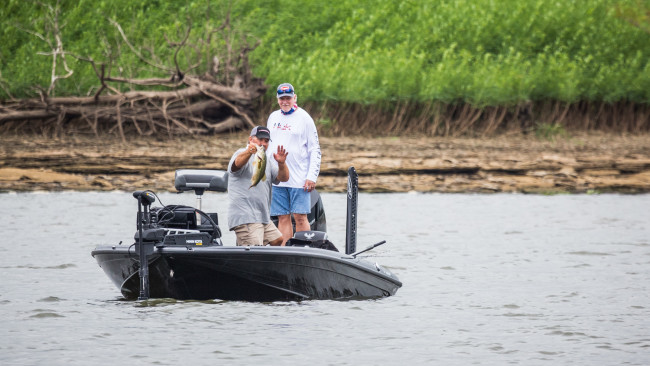 5. Mix-and-match does it for Curtis

David Curtis says he was unable to dial-in a single consistent pattern on Fort Gibson, and a quick look at his front deck verified the claim. Curtis had perhaps 15 rods crammed onto the deck, each with a battered bait tethered to the hook holder.

“I spent a week pre-fishing,” explains Curtis. “I was honestly just trying to get dialed-in to one or possibly to things to go with, and I struggled to do that. I caught fish here and there but would switch up and catch them doing another thing.

“All things considered it was a blessing to be here,” he adds. “It’s been grind, it’s been hard work. Lots of casts and not a whole lot of fish catching. I caught fish on about half of what you see on the deck of this boat. Narrowing it down, the majority of the fish came off of a topwater, a crankbait and a Biffle Bug.” 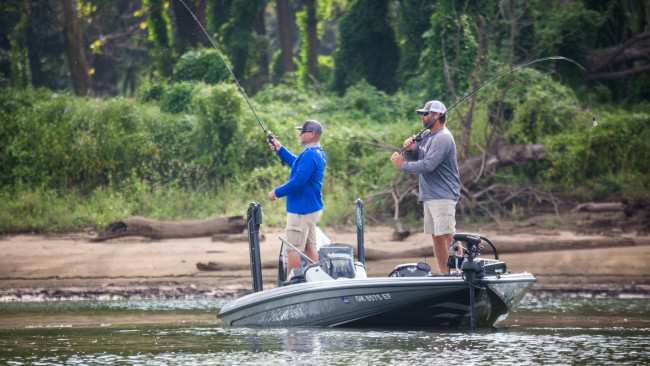 Local stick Brett Brumnett found his 38-12 total by hitting bass on mud drop-offs with a one-two punch throughout each day. Brumnett would plunge a bama craw-colored Gene Larew Biffle Bug to the bottom and alternate between dragging and swimming the lure along drop-offs. Brumnett says his biggest fish each day came off of the Biffle Bug, but he was able to successfully fill his limit by following the fish shallow with a Heddon Zara Spook.

“We caught them all day with the Spook,” Brumnett says. “I would start in the lake early in the day and then move into the river late in the day looking for ledges and drop-offs. I was looking for big shad, and when the fish came up I would sling that Spook at them.” 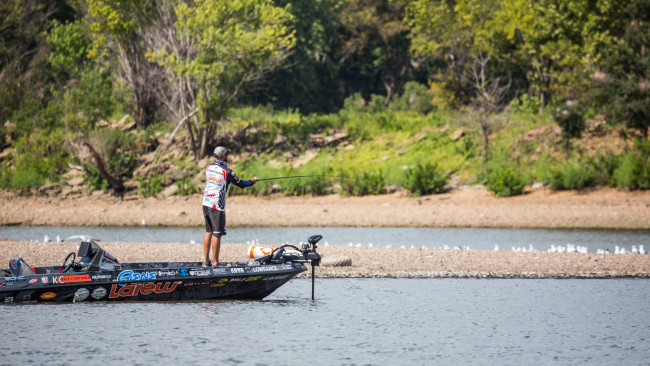 Fort Gibson might as well have been home court for Tackle Warehouse Pro Circuit pro Kyle Cortiana. The Coweta, Okla., pro lives less than 30 minutes from the lake, and like many in the field, he leaned heavily on a Gene Larew Biffle Bug to deal the damage needed for a top-10 finish.

“I was dragging a Biffle Bug around throwing a big one and a regular size one in Sooner Run and black neon,” Cortiana says. “I was Texas rigging it and flipping it with a 1/4-ounce weight that was not pegged. It seemed like I caught more fish that way, but it cost me some fish as my weight stayed put and they broke me off.”

Cortiana was one of the few pros in the top 10 to make his living in the main lake, noting he could only get small bites in the Grand River, where most of the field found itself by the final day.

“It was really tough out there, but I have a lot of history on this lake,” Cortiana adds. “So, I ran a lot of history and knew where the fish should be that I could catch by dragging that Biffle Bug around.” 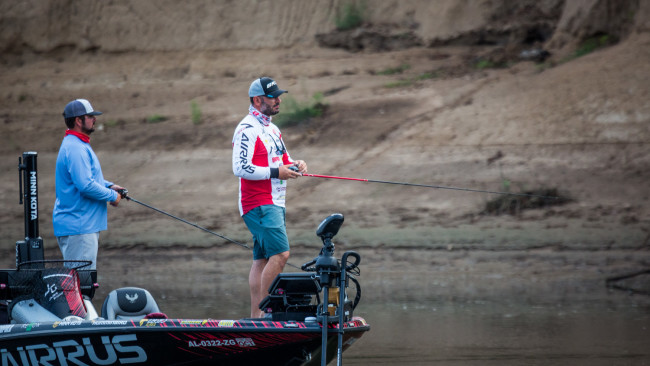 8. Gallelli finesses his way to another top 10

“It was a real struggle this week,” says Gallelli, who only just arrived back in the United States from Italy thanks to an athletic visa that allowed him to return from Florence. “The number one goal here is to try to get as many points as possible so that I can gain entry into the [Tackle Warehouse Pro Circuit] next year. I haven’t been bass fishing for three months, because back home I was just trying to spend as much time as I could with my family, my girlfriend and my son.”

Gallelli says he practiced for seven days straight to prepare for Fort Gibson. He was able to crash the top 10 by using topwater baits and spinnerbaits to target shallow bass while finesse fishing for the rest of his limit. Gallelli used a 5/8-ounce Elite Lures JG Spinnerbait in JG Herring color and deployed a wacky rig Legio Aurea Commodus Conqueror Stick and 4/0 hook as a finesse tactic throughout the event.

Gallelli spent day one struggling in the main lake before climbing into the top 10 thanks to a two day stretch spent fishing drop-offs with a Ned Rig on the Grand River that netted him nine keepers. 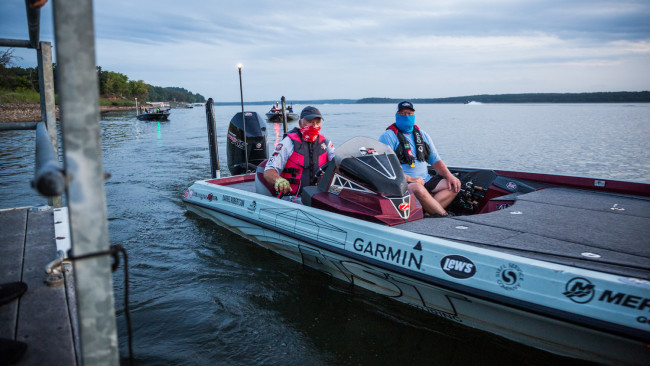 9. Robertson relies on the Senko

Robertson won the 1999 Forrest Wood Cup on Fort Gibson, cementing a permanent place in the history of bass fishing. More than two decades later, he managed to notch a top 10 on the same waterway thanks to persistent patience. Robertson says he was methodically fishing brush piles with a wacky-rigged green pumpkin Yamamoto Senko—a precarious endeavor as the finesse approach was subject to breaking off when tangled with submerged limbs.

Still, carefully placing his bait out of harms way, Robertson boated 31-14 over three days for a strong showing on what was an incredibly tough fishery.

“I was fishing around brush, flipping it,” Robertson says. “It hangs up awfully easy, so I had to take my time and be methodical with it. I caught nearly all of my fish out of creeks. It’s a fishing-catching little dude.” 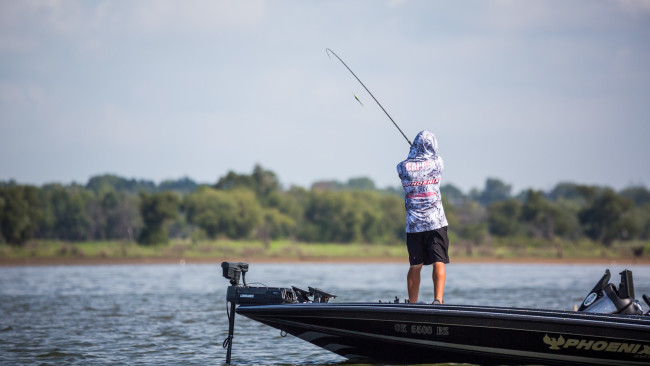 Muskogee, Okla., pro Blake Capps found success with a variant on the same pattern run by several top 10 anglers throughout the week. He began each day by targeting shallow bass on flats with a Heddon Zara Spook before moving out after deeper foray. Chunk rock and brush piles provided the perfect target area for a 10-inch Berkley Powerbait Power Worm that Capps rigged with a 5/16-ounce weight and a 5/0 Gamakatsu Round Bend Worm Hook for a Texas-rig combo that was good enough for 29-15 over the course of the event.