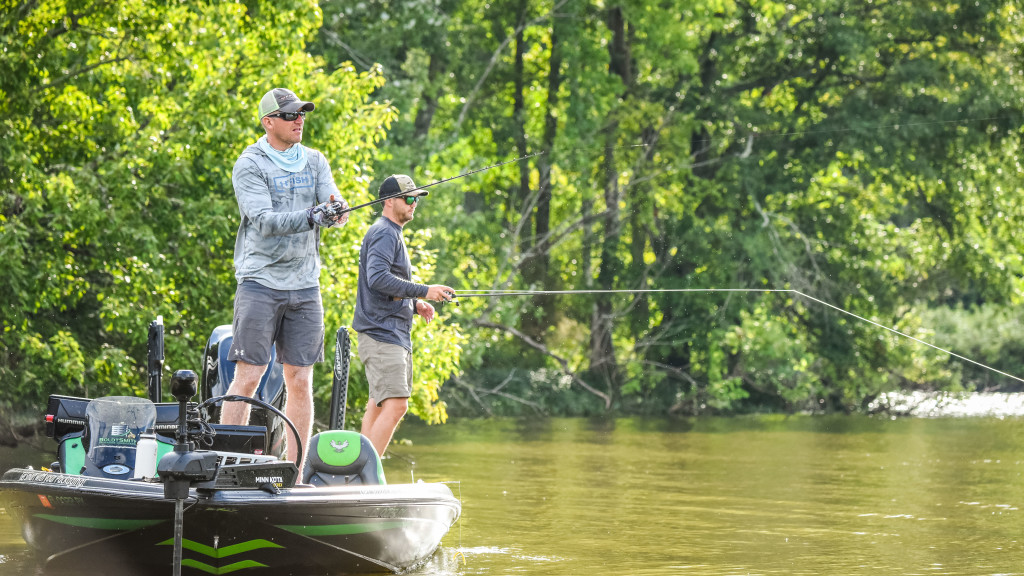 Originally from Wisconsin and sometimes wearing a Green Bay Packers hoodie on stage, Dustin Smith doesn’t fit the mold of Toyota Series Southeastern Division Strike King Angler of the Year. Still, Smith hammered out a pair of top 10s and a 27th-place showing en route to the title, and his style of fishing was simply perfect for this season in the Southeastern Division. So, when he triumphed over Josh Stracner by a single point to end the season, it wasn’t surprising in retrospect, especially if you’re familiar with his fishing style. 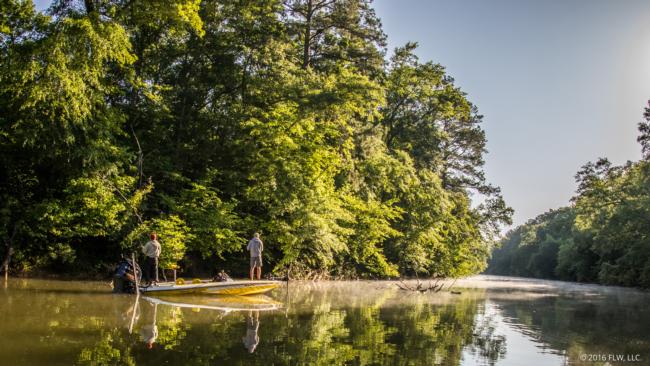 Smith’s first top 10 as a boater in Toyota Series competition came in 2016 on Wheeler Lake. He ran up the lake from takeoff near the dam and far into Cotaco Creek – the same creek out of which John Cox would win the Forrest Wood Cup that same year.

Though Smith runs a Phoenix and not a tin boat, he’s crafted a shallow water style that really came into its own this year.

“I don’t know how it started; we just always fished shallow when we were kids, getting in places where you can’t get a regular boat,” Smith says. “The fish in there, because they’re unpressured, they bite so quickly. Some places you can’t really do that and have a chance at making a cut, but some places you can.

“So, I just try to concentrate on those areas where anglers aren’t getting, either because it’s difficult to get into or it’s a long run, or because it’s so shallow you wouldn’t think a bass would live there, but they do.”

After college at the University of Wisconsin-Stout (he missed the College Fishing revolution by a year), Smith went on to work in Kentucky. There, fishing on the Ohio River, he sometimes made round-trip runs of more than 250 miles in a yellow-and-white Blazer. Then, he moved to Georgia, then Pittsburgh, and most recently to Florida, where he’s lived near the Harris Chain for the last six years.

“The cool thing about moving so much is that it’s given me a chance to fish a huge variety of places, and not just for a few days,” says Smith, who fishes a lot, and recently re-powered after putting more than 700 hours on his motor in three years. “It should have made me very versatile, but it’s kinda given me the opposite effect. The majority of places I go to, you can make a shallow bite work. It might be tough, but the majority of places you can get it done.” 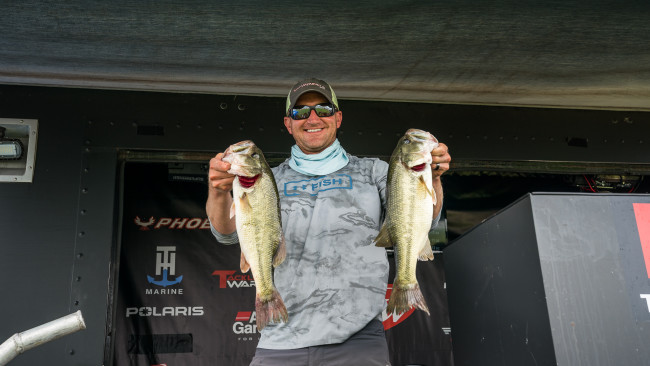 “I’m very disciplined as far as goals, and one of my goals this year was to make a run at AOY,” Smith explains. “Looking at the Southeastern Division schedule and how I prefer to fish, I thought it might actually be possible.

“That’s why Angler of the Year was a big goal this year. It’s not usually a situation that I have the opportunity for, usually once a year I fall on my face, just because I take a lot of huge risks. When you make a long run like that, Plan A needs to work, because there’s just no time for Plan B.”

This year, it all worked, and he shaved past second place by the skin of his teeth. Still, after a broken trolling motor and some lost fish left him shy of a limit on day one at Neely Henry, Smith had to battle.

“It was so close; there were some really good fishermen right on my heels going into Neely Henry,” Smith admits. “That first day, with everything that happened, I went into the second day pretty much straight-up angry. I think the first fish I set the hook on came flying like 30 feet past the boat on the hookset.”

Smith ended up corralling five for 8 pounds, 4 ounces on day two at Neely – just enough to finish 27th and take the title. 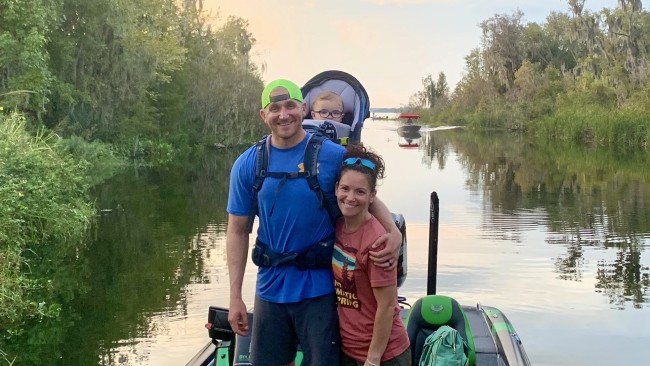 Back in February, Smith rode with John Cox as a Marshal in the Tackle Warehouse Pro Circuit event on the Harris Chain. Now, after his top-five finish in the points, Smith could be fishing right alongside Cox in 2021.

“It’s such a dream to be able to do that,” Smith says of the prospect of really going pro. “I own a business, and everything lines up. There is potential. It’s definitely something we’re kicking around. The schedule came out yesterday and it’s pretty attractive. There are some cool places I’d like to go to and see how I do. I might totally get my teeth kicked in, but I’d like to find out.”

Still, it’s not a done deal. Smith and his wife Christie have a young son, Reed, and Smith’s not the type to just dive into a new venture on a whim.

“Probably the biggest barrier is making sure it works with my family, my wife and my little dude, and my business,” says Smith. “Now that I’ve qualified, it’s really diving into the details about how it will work logistically. I’m very data-driven, so there will be a lot of time put into this to make sure it would work.” 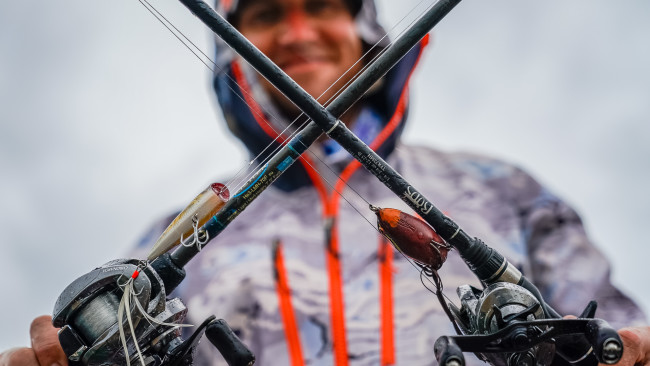 With the Southeastern Division hitting Lake Eufaula, Wheeler Lake and Neely Henry all pretty much in the summer, Smith had a golden opportunity to do something special.

“I’m into looking back and analyzing everything that happened. I’m so nerdy that I make charts and graphs; it’s kind of ridiculous,” Smith jokes. “Every fish that I weighed in, every day in those three tournaments came on topwater. Whether it was a popper, a frog, or a buzzbait.”

Smith says the topwater is so key for his shallow style for two reasons: For one, he can cover miles of water, particularly with a buzzbait, to find productive water in practice.

It’s also a good way to catch a big one.

“I love throwing a topwater, not only because it is super fun and exciting, but your opportunity to catch a giant is probably the highest of any kind of technique,” he explains. “Especially in shallow water, they can’t stand it.”

Outside of topwater, he also leaned on one forage species.

“Everything was really related to bluegills,” Smith adds. “At Eufaula, I was specifically targeting bluegill beds that I could see visually. I would just drop a waypoint and not even fish it. At Wheeler, I saw a few bluegill beds, but just a couple of them, but there were bluegill present, in the shade line or something. In my opinion, in the summertime, unless you’re fishing deep, those bluegills up shallow are money. You can really catch a giant bass doing that.”

At Eufaula, Smith fished shallow all week with a SPRO Bronzeye Frog and a Damiki D Pop.

“I was fishing anything that was super, super shallow; so shallow that you wouldn’t think a bass was there,” he says. “That’s what I was fishing, whether that’s grass or cypress trees or laydowns, whatever it was.”

Every spot he fished was a bluegill bed, which he found using the same visual search technique he uses to find spawning bass.

“All week I just put it [the trolling motor] on 90 and went around the bank and looked everywhere and marked all the beds,” he says. “I’d stay way off of it and throw the D Pop; fire it in there. Unless it was something that I couldn’t get it under. Then I’d skip the frog under. If one was there, it would be about two casts and it’d show itself.”

Finishing third at Wheeler while Stracner finished 22nd was a big key to Smith’s AOY win.

“I love this lake,” Smith says of Wheeler. “I don’t really care to go to a Guntersville or a Pickwick because of all the boats. Those places are packed all the time. But here on Wheeler, you can go back in these creeks and power fish shallow and never see another boat all day; it’s awesome.”

As you’d expect, Smith did his damage up shallow in creeks.

“I ran into every creek in practice and I found four creeks that had a population of fish in them,” says Smith. “So much of it in these tournaments is making decisions, and the first creek I went into on day one, that I thought was going to be my best, was my worst. What was my worst creek turned out to be my best, which was where I was bouncing between spots with Kip [Carter].”

Wrapping up the season at Neely Henry, Smith got dialed in on a buzzbait bite again, but it took him some doing.

“That’s the only place I hadn’t fished, but based on the research I did beforehand, it seems like if you wanted to fish shallow, you could really do that,” Smith says. “Practice was brutal, in my first two days of practice I never had a bite. But, the third and fourth day of practice, I really found them and got them dialed in.”

Keying on certain stretches of bank grass, Smith ran into trolling motor trouble on day one. At full strength on day two, he caught five on a buzzbait, but lost the makings of a 12-pound bag. Still, it was just enough to get him the Angler of the Year and more than enough to lock in qualification for the Toyota Series Championship.

Here’s a look at the top 10 pros in the Southeastern Division in 2020.