Muddy water has made fishing tough so far 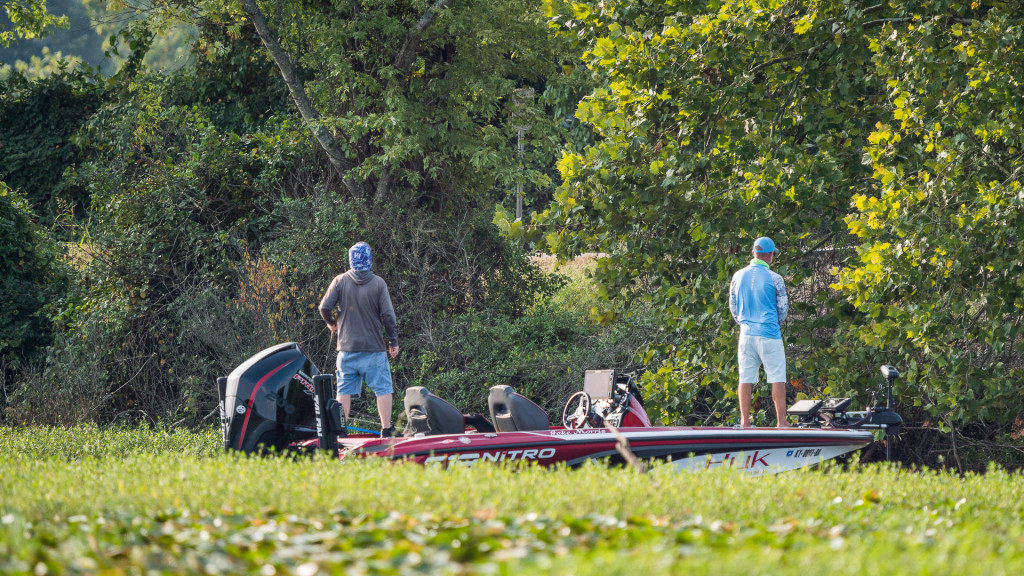 Thursday’s opening round of the Toyota Series Plains Division presented by Fish-Intel opener at Lake Dardanelle followed the script many anglers predicted.

Despite many favorable conditions at the beginning of a peak fishing season, muddy water and bright sunshine made fishing difficult across the 34,000-acre Arkansas River impoundment.

The air temperature at takeoff was 78 degrees, with only a wisp of a breeze. The skies cleared almost fully at dawn, and temperatures rose steadily through the day. There was plenty of current all morning.

All anglers interviewed before the tournament said their fortunes hinged on catching a limit early before the bite evaporated between 10 a.m. and 1 p.m. Most predicted another flurry of activity from 1 o’clock to 3 o’clock.

Nick Wade of Arkadelphia, Ark., took advantage of the morning bite in the upper mid-lake area. He boated his fourth keeper at 8:40 a.m., but as some anglers predicted, he had to churn through a lot of non-keepers to get them.

There was considerable schooling activity throughout the morning. Wade says most of the schooling fish were white bass, but black bass were beneath them if you could get a bait past the whites. He said he caught about 10 non-keepers in this manner. 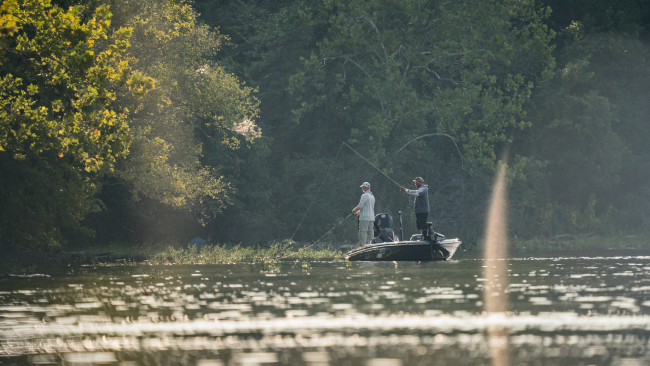 “Most people haven’t gone after the schooling fish like they should,” Wade says, adding that he caught all of his keepers off a suspended root wad beside the bank.

“It’s the most unique place I’ve found,” he adds. “Usually, fish replenish the next day or in the next major or minor feeding period. I’ve gone back over this spot four or five times and caught fish this morning.”

The conditions are ripe for a slugfest, but muddy water and bluebird skies are tamping down aggressiveness.

Timing is vital for the morning bite. Marty Scudder of Rison, Ark., arrived at a small bay between lily pad groves in the mid-lake area mere minutes after a major flurry of topwater activity ended. He didn’t see the lion’s share of the activity. 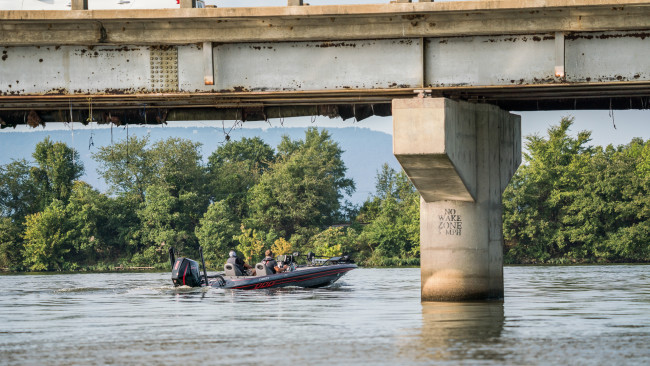 “I came in yesterday and caught them on topwaters,” Scudder says. “It’s been a pretty good bite early, but it gets tough past 10 (a.m.)”

Brian Futch of Herrin, Ill., started the day fishing grass and laydowns in the mid-lake area. He caught his first keeper at 8 o’clock.

“Five bites are hard to come to by,” Futch says. “The morning bite has been good, but I’ve struggled through the day.”

John Vogt of Boerne, Texas, who spent the morning flipping bankside wood cover, caught his first keeper at 8:20. He says it’ll take 9 to 10 pounds a day to make the top-10 cut, and that 38 pounds will probably be enough weight to win the tournament.

Dave Redington of Winnsboro, Texas, had not caught a keeper by 10 o’clock, despite fishing an attractive combination of rock and current.

“My lack of brain power is keeping it from being all it can be,” Redington says, laughing. “If I had an answer, I’d be doing something different and catching them. It’s just a matter of hitting enough spots.”

Weigh-in begins at 3 p.m. CT, which you can watch at flwfishing.com. Full articles about today’s action will follow.