Stokes Leads on the Detroit River

Bevy of 20-pound bags hit the scale on day one 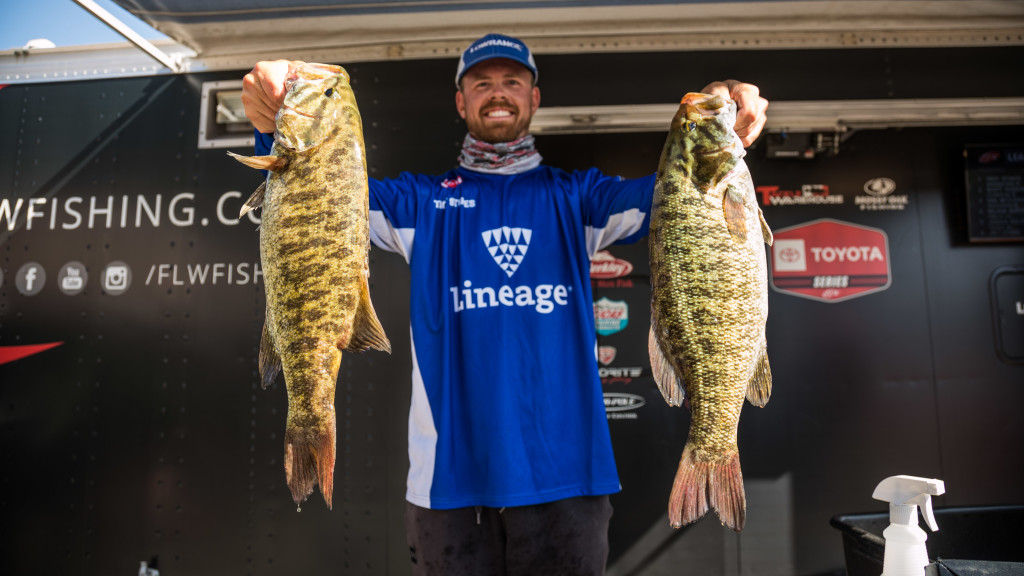 Wind kept the pros in the Toyota Series Northern Division event on the Detroit River pinned to the actual river, but the fishing was still very good. Plenty of anglers brought in 17 pounds or more, and the leaders are all concentrated around the 20-pound mark. In first, Troy Stokes of Brownstown, Mich., weighed 21 pounds, 4 ounces to kick things off. In second, Scott Dobson cracked 20-14, and Dan Mittlestat and Wilson Burton also crossed the 20-pound barrier.

With the wind forecasted to be even stronger on day two, the anglers will be fishing in the river again tomorrow. For Stokes, that’s not the worst thing, because he’s been making the trek from Sandusky to the Detroit River for most of the season. 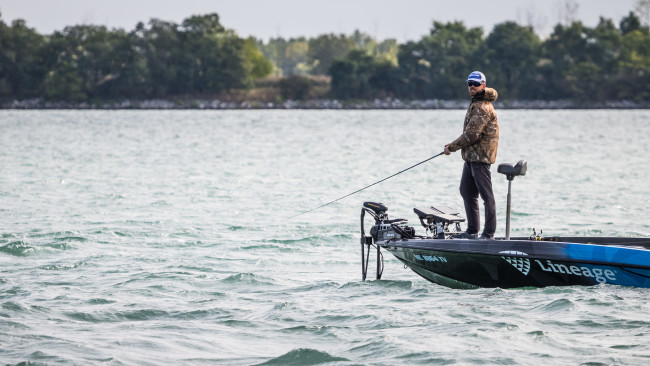 Today, Stokes pulled out most of the stops to stay away from the crowd.

“It was crazy, I started fishing, and I hit some honey holes first thing, and there’s like 10 boats on everything,” says Stokes. “I have some other stuff that no one is fishing, and I just kept bouncing around until I hit them.”

Stokes says that he never fished next to another boat after his starting spot, and he caught his bigger fish one at a time.

“I’ve got maybe one school, but they’re not big,” he says. “But, it’s a good spot to get a limit. The spots where I caught the big ones, it was pretty much just one big one. I didn’t do anything special, just regular smallmouth stuff. I caught one on a spinnerbait, other than that, it was a drop-shot for the most part.”

Fishing right on the bank and in more than 20 feet of water, Stokes covered about everything the river has to offer. Given the chance to go anywhere he wants, he says he’s got some stuff in Erie to hit, but he’s not too disappointed to be stuck in the river. 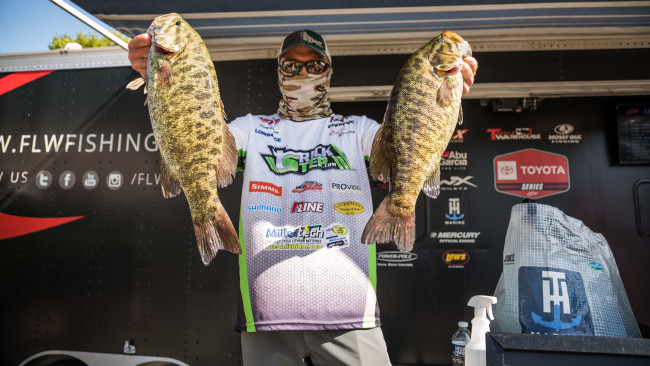 As is so often the case for Scott Dobson, he caught a bunch of smallmouths on moving baits in a river.

“Everything right now is predicated on the shad and the current and moving baits,” says Dobson. “Spinnerbaits, crankbaits, a-rigs, swimbaits, jerkbaits. I’m sure guys are catching them on a drop-shot, but the big fish are keying in on big shad. Every one of my fish came on a moving bait.”

Fishing a whole slew of spots from shallow to deep, Dobson says that more moderate current is key. He also did markedly better later in the day, catching most of his big ones from about 11 a.m. on.

“The floating grass was a big problem today,” says Dobson. “The eelgrass is dying off, it’s starting to float downriver and usually a north wind for a few days will blow it out, but it’s everywhere now.” 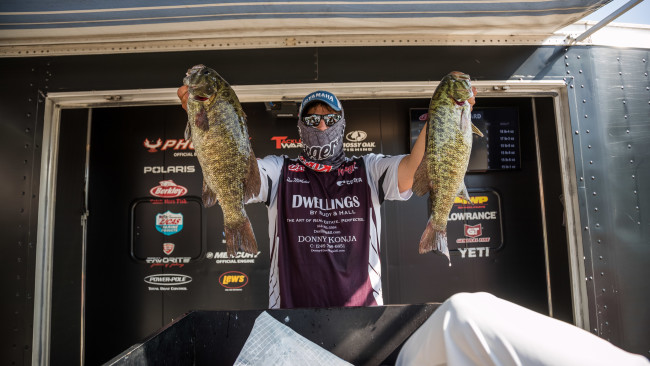 “For me to catch 20 pounds today was pretty special,” says Mittlestat. “I had a terrible practice on St. Clair and an even worse practice down here.”

Still, Mittlestat ended up putting it together nicely.

“It started off awful, the current was ripping, and the water I was fishing was pretty dirty,” he says. “So, I scrubbed my plan and went back to the basics. I’m local, so I just went back to some old jump holes and the current slowed down enough to get them to set up on some boulders. So, I just kept my bait vertical and caught them pretty good between 11 and 12 o’clock.”

Culling twice and catching perhaps 12 keepers, Mittlestat isn’t too sure about tomorrow, but things are definitely looking up after day one. 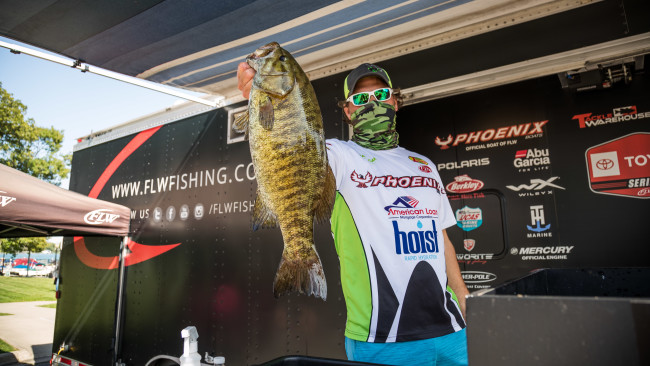 Had the tournament only been 30 minutes long, Wilson Burton would have locked up the W in a hurry.

“I went out to my spot and there were like five boats in the area,” says Burton. “I drifted off to the left, and I started doing something different than everybody else and it started producing.”

Burton says he caught his limit in about 10 casts once he started doing the right thing, catching fish on back-to-back casts multiple times.

“Tomorrow is going to be tough,” Burton says. “People saw what I was doing and they moved in, and I’m going to be a late boat tomorrow.”

Still, Burton isn’t too mad to be in the river. He says he’s practiced a lot in the river, and even if the weather calmed down and he could go anywhere, he’d still be sticking it out in the Detroit River. 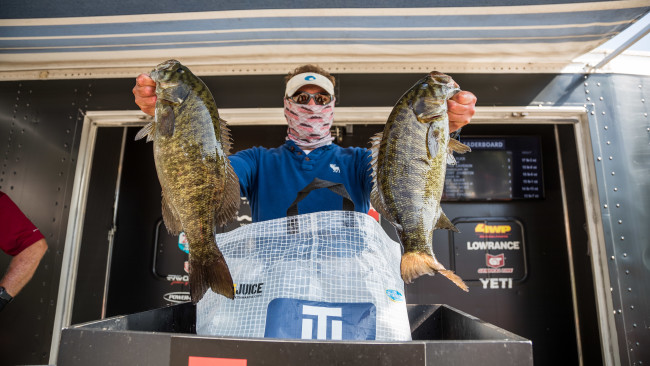 One of two pros who caught 19 pounds, Josh Kolodzaike doesn’t want to give too much up, especially considering the crowded nature of some parts of the Detroit River.

“I caught a limit pretty early and then went to a couple other spots and culled up to catch some bigger ones,” says Kolodzaike. “I caught them on some shallow spots, and I lost one good one, but other than that I fished pretty clean.”

Kolodzaike says that the amount of boats isn’t really the issue, but the amount the fish are moving is.

“I’m not worried too much about the pressure, but the size is an issue,” he says. “There were good ones on a couple spots today, and if the wrong ones are there tomorrow, I could easily catch 15 pounds instead. There’s skinny ones and fat ones, and if the fat ones are there, you’re going to have a good day.”