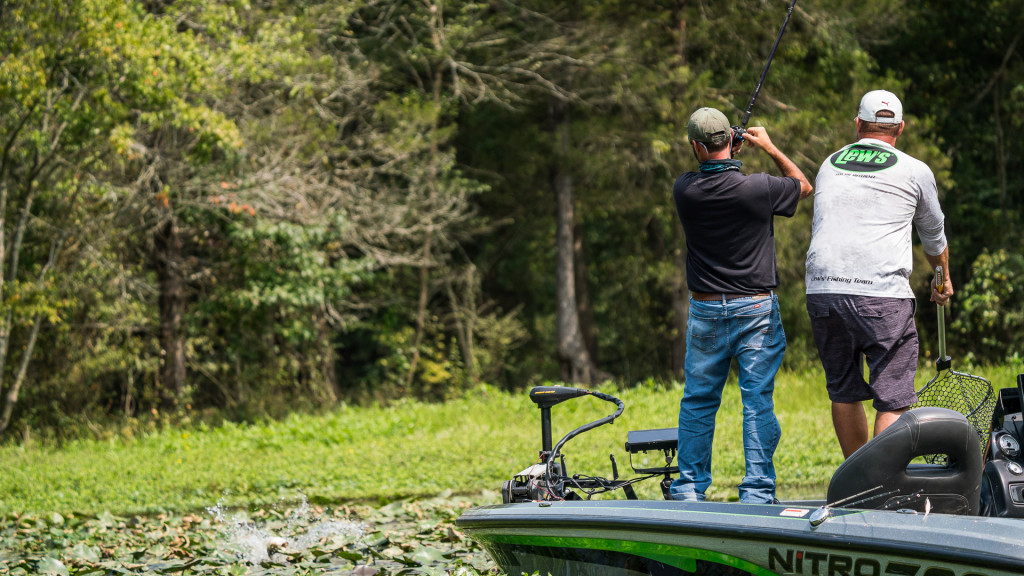 Championship Saturday of the Toyota Series Plains Division opener at Lake Dardanelle presented by Fish-Intel followed its pattern of the week with anglers failing to capitalize on sparse opportunities.

Starting the day with the lead, Joe Bennett of fished within five minutes of the takeoff point at Lake Dardanelle State Park. He caught one keeper largemouth early this morning and added an estimated 3 pounds by 11 a.m.

“A 5-pounder blew up right behind us,” Bennett says. “I threw at him four or five times but could never get him to come up again.”

At 9 a.m., Bennett crossed the lake to work an area that has been productive for topwater fishing. He got no bites there and returned to the south side of the lake to work his primary pattern.

“With this wind picking up, I thought it would be good, but they dropped the water quite a bit and repositioned the fish, I think,” Bennett says.

Co-angler leader Bill Amis is fishing with Bennett and was unable to land his only bite and had zero fish by 11 a.m.

Teddy Bogard, who started the day in sixth place, had three keepers in the well by 10 a.m., but says he lost a 4-pounder and a 3.5-pounder while fishing main-river shell beds.

“I had a bad morning,” Bogard says. “That’s what happens with these little Rat-L-Traps. That’s about all I can say.”

At 10 a.m. Bogard relocated to a very low percentage area in Shoal Bay. Bogard’s co-angler, Kendrick Calhoun of Lonoke, Ark., caught one fish in that area.

Kevin Short of Mayflower, Ark., fished across Shoal Bay. He left the area at about 9:30 a.m. for a secondary area known as The Narrows.

Elsewhere, Steve Floyd had one keeper early. Cody Bird made a 30-mile run upriver and we were unable to get a report. Kyle Weisenburger started the day in Dardanelle Bay and in Illinois Bayou, but he was not seen in either area.

Kevin Riney was one of the few anglers in the top 10 to report a limit. He was fishing at the extreme end of a creek where the fish were plentiful but very spooky. Riney threw a large variety of topwater lures in an attempt to activate them.

Weigh-in starts at 3 p.m., so tune in to see who will claim the top honors on both the pro and co-angler side.