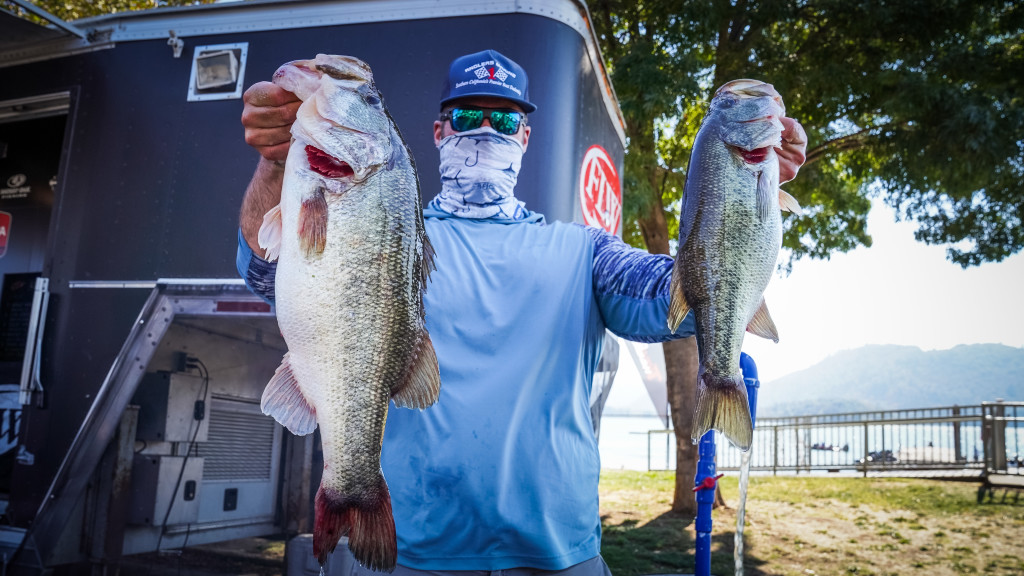 The second day of the Toyota Series Western Division event on Clear Lake began with cooler temps and ended with sunny skies, making for a nice relaxing day on the water. Day-one leader Tom White of Costa Mesa, Calif., must also feel pretty comfortable after backing up his 24-pound, 12-ounce limit from yesterday with a solid bag weighing 19-5 today.

White’s pattern from day one

His 44-1 tally has him in the driver's seat for his first career win with FLW. White leads Sergio Arguello by 5-10 ounces going into the final day. 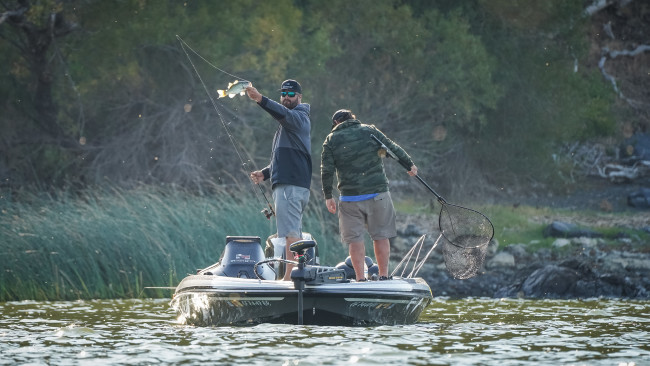 If this tournament featured a side pot for the biggest total from a single boat, White would have won each day in a landslide.

Yesterday he took control of the lead and his co-angler, Rachel Uribe, was also leading her division. It was a similar story today as White's co-angler, Jeff Hodges, sacked up 21 pounds behind him.

That's two days with a combined total of over 40-pounds and a testament to how good his area is. White thinks it could be the tournament-winning spot.

"I think there's enough there for me to hold on," he says. "But, the bites are few and far between and you have to stay patient. I stayed there the entire day today."

Divulging a little more about his pattern, White notes fishing slow with light line was the key to his success.

"I also think I'm fishing deeper than most guys are," says White. "It is just really slow fishing. It was tougher today with no wind and I hope we get a little wind tomorrow." 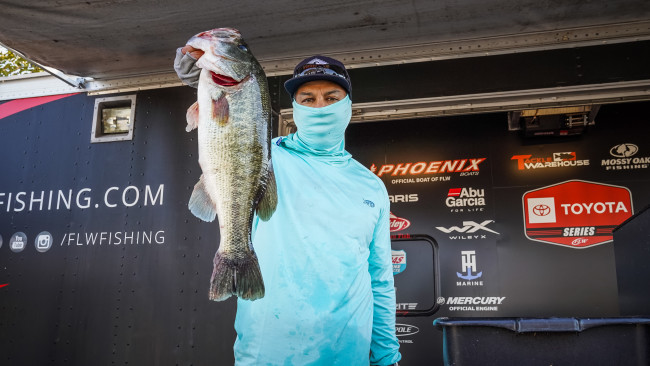 After catching over 20 pounds yesterday, Arguello's weight dropped today with 17-13, but he moved up two places from fourth to second.

"It was a lot slower today and they weren't biting right away like they were yesterday," Arguello says. "I caught four in the morning but didn't fill my limit until around 12:30. At about 2:30, I got rid of my smallest one. I had to keep plucking away at them and fish pretty deep water for Clear Lake."

He's fishing an area that he shared by several other competitors but believes he is the only one of the group to survive another day on Clear Lake.

"I don't think anyone else made the top 10, which should help," he says. "All the guys there were great and we gave each other room, but having it to myself will help." 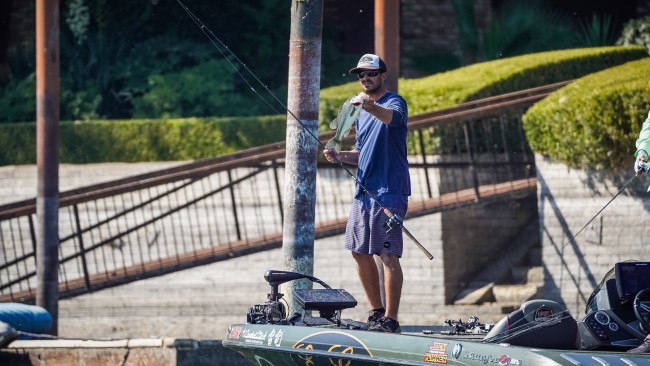 Justin Kerr weighed his second-consecutive bag in the upper teens with a 17-6 bag today and he did it by milking one spot.

"I got lucky and was able to get there first," he says. "I stayed there all day, cranking an Evergreen Combat Crank and fishing a Carolina rig." 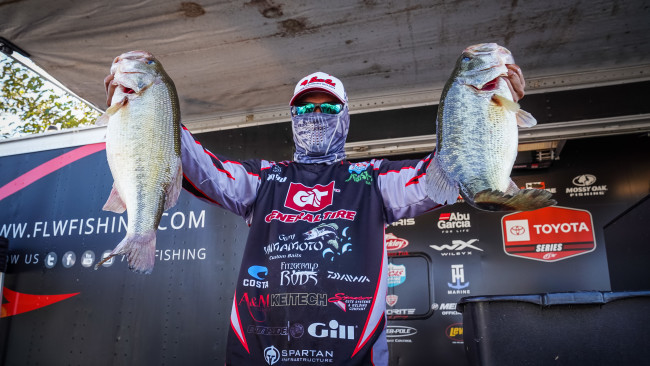 Tai Au's day started rough but ended great as he wrapped up another top-10 finish.

"The day started by losing my GoPro on the boat ride to my first spot," he says. "When I got there, I caught one right away, but they stopped biting. I fished for another hour and a half and got frustrated and left."

When he returned, things changed in his favor.

"I knew they were there because I could see them on my Lowrance units," he says. "I changed it up and started getting them to react with faster baits and we got into a flurry. For two hours, my co-angler and I slayed them." 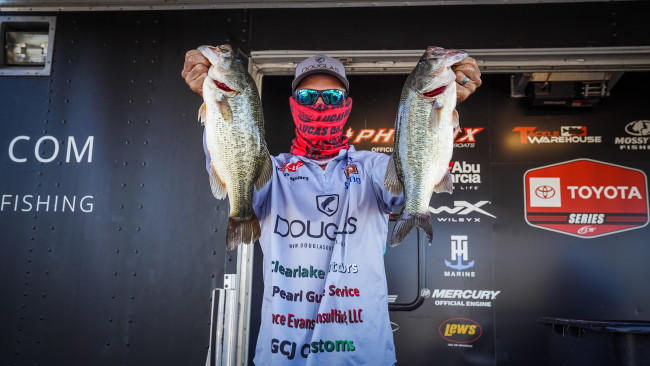 John Pearl started the day in third thanks to his 20-13 catch from the first day. He was able to bring in 15-6  today, after scrambling late in the day.

He's fishing in the northern end of the lake in shallow grass and was among several anglers fishing there.

"It was a tough day there and I was the last one to the party," Pearl says of his arrival time to his first spot. "I grinded it out there with a ChatterBait and a swimbait until around 1:00. I left there with a limit weighing around 12 pounds."

Knowing he needed an upgrade, he called an audible.

"I ran to a spot where I knew I could catch some 3-pounders flipping," he says. "I was able to cull a few times, but I am going back to the ChatterBait and swimbait tomorrow." 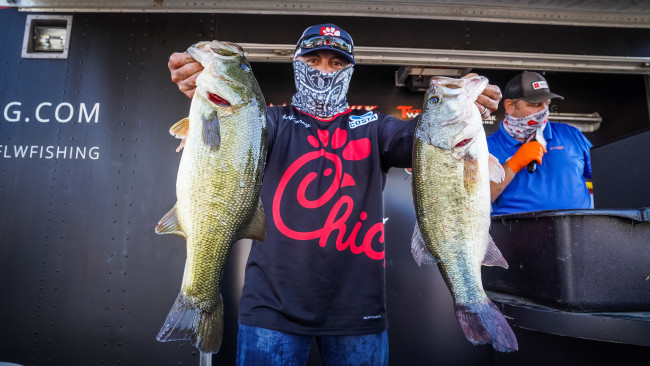 Jack Farage of Discovery Bay, Calif., is no stranger to the top of the Western Division's standings. He's won five events in the division, including the season opener on Lake Havasu in March.

He brought in 20 pounds, 6 ounces today and was one of three co-anglers to crack 20 pounds. His 34-3 total is just one ounce more than both Blaine Christiansen and Jeff Hodges.

Farage fished with pro Zach Richard and says he made some critical adjustments today to turn things around.

"It started out brutal and after catching one fish early, it was nothing for three hours," Farage says. "I changed things around and started fishing very slow and just dragging the bait."

Farage says that he likes his chances at yet another win.

"It is awesome to be leading, especially going into the final day," he says. "In a tough bite like this, you know you are going to be paired with a pro who is around fish."