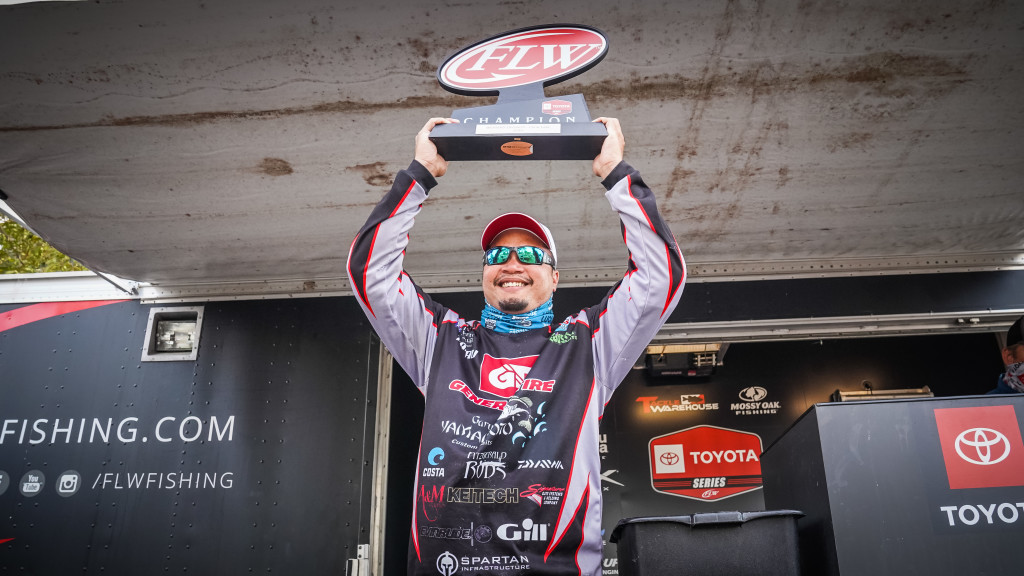 All week long, anglers crossed the stage with solid bags at the Toyota Series Western Division finale on Clear Lake. But, Glendale, Ariz., pro Tai Au brought in the week's biggest limit today to jump from fourth place into the winner's circle.

Au won the season opener in his home state on Lake Havasu back in March and now added another victory today, thanks to a 26-pound, 4-ounce catch. Each day his catch progressively got heavier and he was able to climb several spots in the standings every day.

He ended up with 63-3 for the event to outdistance Tom White, who led after the first two days, by over 5 pounds.

On stage, Au was speechless that he pulled it off and also a little emotional.

"I'm shocked that I won," he says. "It's also a little emotional for me because this might be my last Western Division event for a while. I'm planning to go back east and fish the Tackle Warehouse Pro Circuit next year and make my dream a reality." 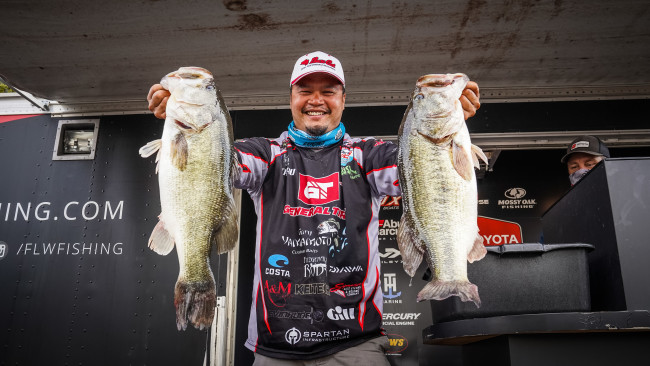 Coming into the event, Au wasn't comfortable with what he found but took a clue late on the last day of practice and ran with it.

"I just got a brand new boat and this week was the first time putting it in the water," Au says. "I spent time breaking it the motor and getting my Lowrance units rigged up. In two and a half days of practice, I caught five bass. On the third day of practice, I broke one off on a Neko Rig and then caught a 5-pounder in one area and that gave me the confidence to start there during the tournament."

The area he found ended up being the winning area and he plied it for three straight days on the way to victory. Au describes the area as a rounded point inside a pocket adjacent to a long flat.

Au's area was in the mid-lake area and featured clean water and grass.

"Being from Arizona, I'm really comfortable fishing clear water and when I come somewhere, I always fish my strengths," Au adds. "I was fishing the grass edges in 5 to 12 feet of water. The grass was coontail and it was very healthy. The clear water helped and let it grow deeper than on other ends of the lake because the water is a lot dirtier."

The first day, Au relied on a Neko-rigged 5-inch Yamamoto Senko in the watermelon red color on a size 1 Decoy hook. He fished the Neko Rig on a 7-foot, 4-inch medium-heavy Fitzgerald rod with a Daiwa Certate LT reel spooled with 8-pound Yamamoto Sugoi fluorocarbon. He ended the day with 17 pounds, 8 ounces and found himself in 13th place.

On the second day, Au returned to the same area. He caught one immediately, but the bite went cold after that.

"I knew they were still there because I could see them on my Lowrance units," Au says. "They were just nipping at the Neko Rig and I knew I had to change it up to get them to react. I started throwing a Lucky Craft LV 500 in ghost minnow and chartreuse shad and figured out the cadence they wanted."

Once he figured out how to fish the bait in his area, his catches went way up as he brought in 19-7 on the second day.

"The key was to rip it as hard as I could to get them to react," he says. "I sat in one spot and made repeated casts to the same place. If you could get the school to fire up, you could catch four or five in a row." 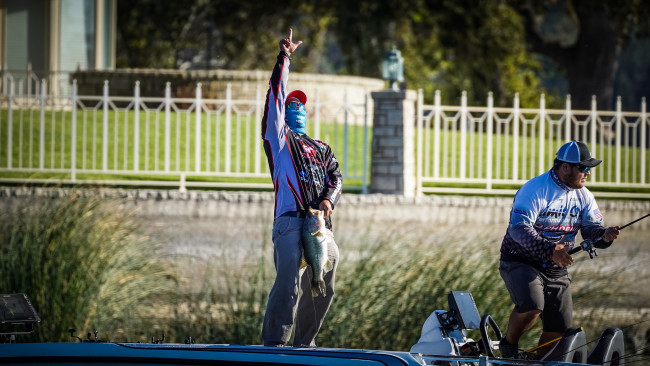 Today, he returned to his magic area and worked it all day long on his way to the win.

"I parked in that same spot for three straight days," Au says. "It was a highway for fish coming in and out along the grass."

He fished the lipless baits on two different setups, depending on the thickness of the grass. A 7-foot, 4-inch heavy Fitzgerald Bryan Thrift Signature Series cranking rod on the outside edges of the grass and a 7-foot, 6-inch medium-heavy Fitzgerald Stunner HD Series rod on the inside grass line. He fished both on Daiwa Tatula 100 reels spooled with 20-pound fluorocarbon.