Docks were the predominant pattern, but other things worked too 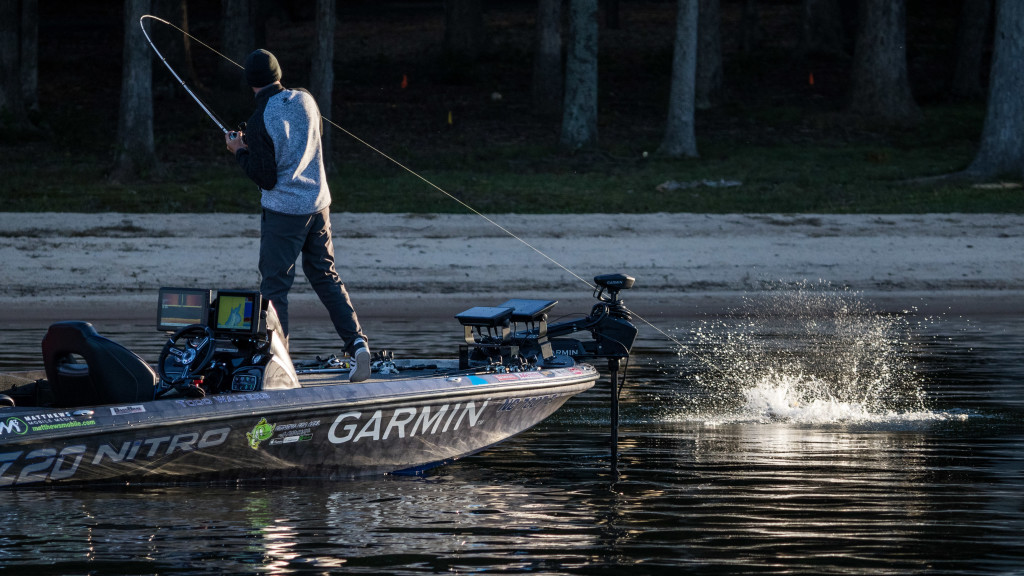 Fall fishing in the southeast can be a challenge. Cold fronts, rainfall, rapidly cooling water and turnover can shake things up and make getting a bite much harder than normal.

Anglers fishing the Toyota Series on Lake Norman last week got a dose of such changing conditions. Normally, winning on Norman takes a largemouth and spotted bass combination; however, last week largemouths proved to be extremely rare. Tournament winner Troy Morrow committed to spotted bass out deep, maintained about a 10-pound per day average and squeaked out a win by a mere 4 ounces.

Others in the event learned that the dock bite didn’t get going until after noon each day and subsequently filled their mornings with topwaters and schooling fish options. Here is a closer look at the second through 10th place tactics. 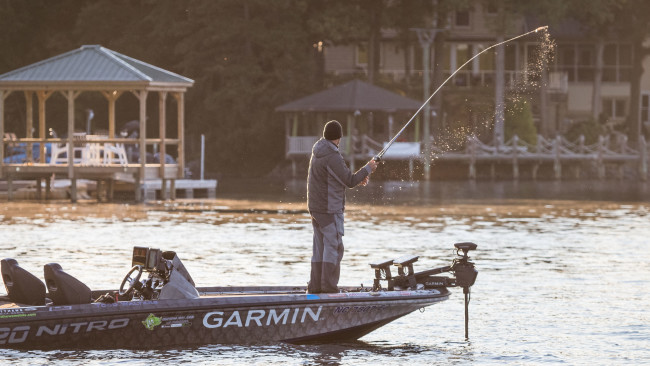 2. Walters delivers with a one-two combo

Todd Walters missed winning the Lake Norman event by just 4 ounces. What made his finish even more painful was he had finished runner-up at the Toyota Series event on the Potomac River a few weeks before by just 7 ounces.

Walters’ success at Norman came from a one-two combo of fishing dock brush with a 7/16-ounce homemade jig paired with a Berkley PowerBait Meaty Chunk and then running and gunning with a River2Sea Whopper Plopper 90 on the bank in between the docks.

“I focused on docks that had brush around them,” Walters says. “The best docks had brush out in front of them out to 10 to 20 feet of water. As I bounced around the lake hitting specific docks, I would also chase shade on the bank with a Whopper Plopper.”

Walters also hit a few shoals and points for schooling bass during the week with a  Megabass Vision 110 jerkbait (French pearl) and a small walking bait. 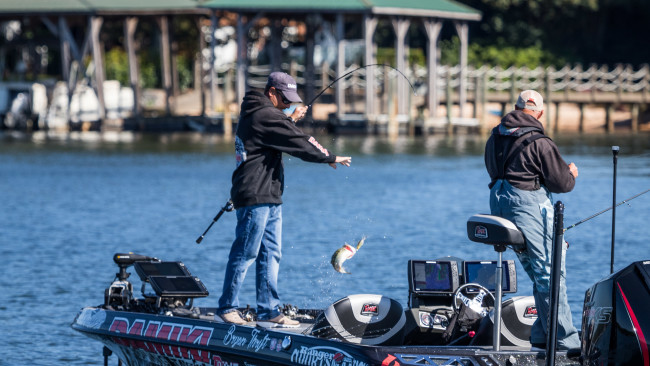 3. Thrift takes third with the run and gun

Through it all, his number one “catch-all” bait was a 4-inch Damiki Stinger rigged to 1/8-ounce shaky head.

“I threw the stinger at everything I fished this week,” he says. “Docks, brush, rock, deep or shallow – it didn’t matter. It’s my clean-up bait and it always catches anything I might miss with faster baits.” 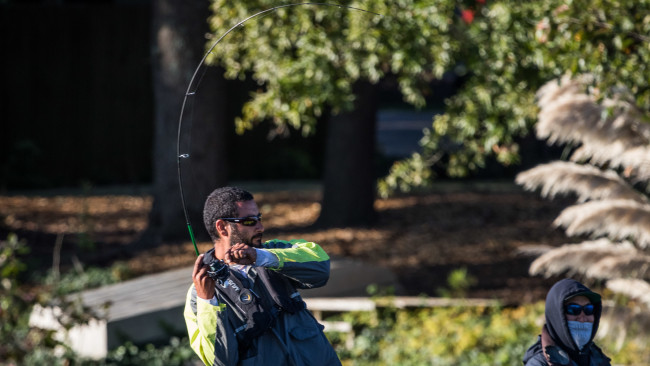 Martin Villa gave a lot of credit to a shaky head for his success at Norman.

“They just bite that thing there,” Villa says. “When I didn’t know what to throw next, I’d picked up a shaky head, cast it out there and catch one.”

Villa targeted docks, brush and even laydowns with the shaky head. He also chased schooling fish around with a variety of lures including a ¼-ounce Strike King Red Eye Shad, a River2Sea Whopper Plopper 90, Zoom Super Flukes and a MirrOlure Heavy Dine saltwater lure.

“Some of the schooling areas were shoals, but I also caught some schooling in the backs of creeks on the flats,” he says.  “It wasn’t happening all the time, it was real sporadic, but if I had a lure ready when they came up for a few seconds, it would pay off with a nice keeper.” 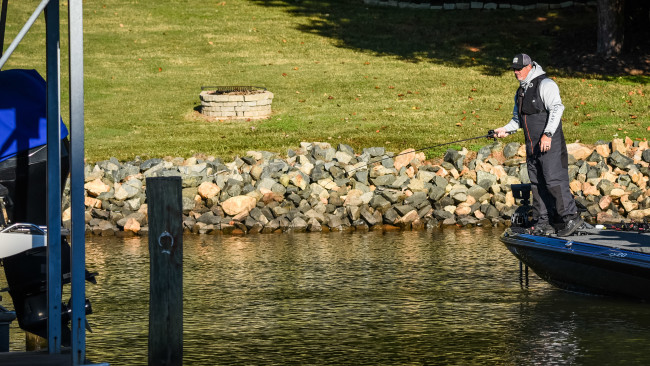 5. Wilson stuck to jigs on docks.

Jason Wilson committed himself to skipping docks all week with a 7/16-ounce ER Lures jig in a color called Jason’s magic. With years of fishing experience on Norman, Wilson has hundreds of “pet docks” that feature brush piles under or around them. Wilson estimates he hit about 40 select docks a day up and down the lake. 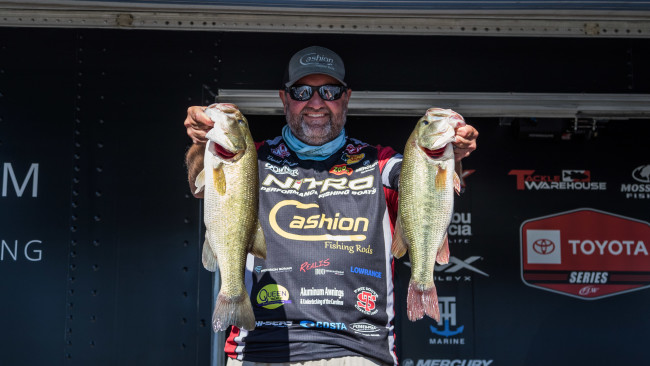 “I caught most of my fish in the afternoon, once the shade tightened up around the docks,” he says. “I spent the morning chasing schoolers on shoals and in the back of creeks just for something to do. That morning bite was tough for me.” 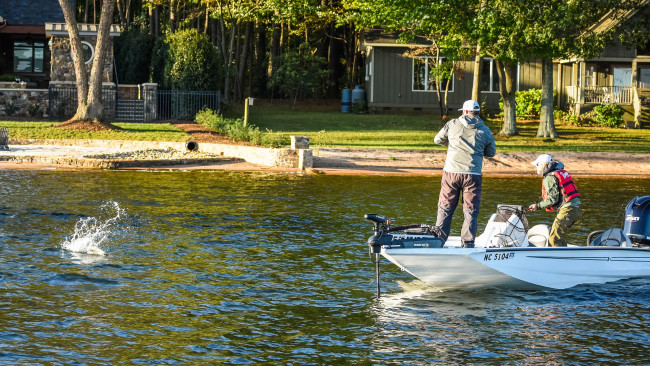 Michael Stephens was the early leader on day one with 12 pounds, 9 ounces. Like others, Stephens found the dock bite to be much better after noon each day.

During the mornings he drop-shotted shoals in the 20- to 30-foot range to get a few keepers in the boat before fishing docks. He did most of his shoal work with a 6-inch morning dawn Roboworm Straight Tail Worm fished on a 7-foot, 2-inch, medium-action spinning rod by Johnston Rods.

Once the sun got up high, he started running a route of brush-sweetened docks with a ½-ounce homemade jigged teamed with a Zoom Creepy Crawler. 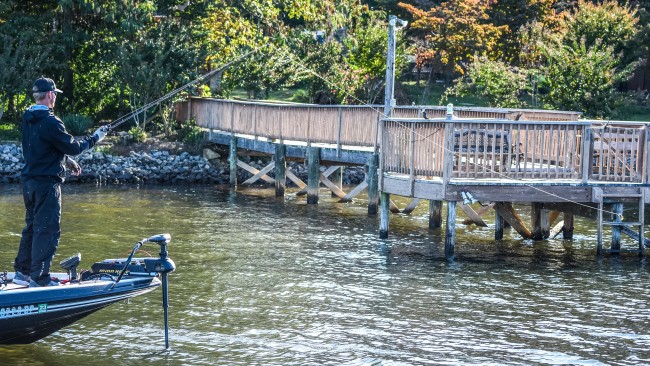 8. Docks and schoolers work for Huskins

Cole Huskins spent the week skipping “point-related” docks in the mid-portion of the lake with a ½-ounce Brian’s custom jig teamed with a Zoom Super Chunk.

While fishing the docks, he kept a Megabass Vision 110 jerkbait locked and loaded in the front deck.

“Every now and then, the fish would come up busting bait near me,” Cole says. “It only lasted for a few seconds, but if I could get that jerkbait to them when that was happening, it was an automatic. That happened two or three times a day and helped me cull up.” 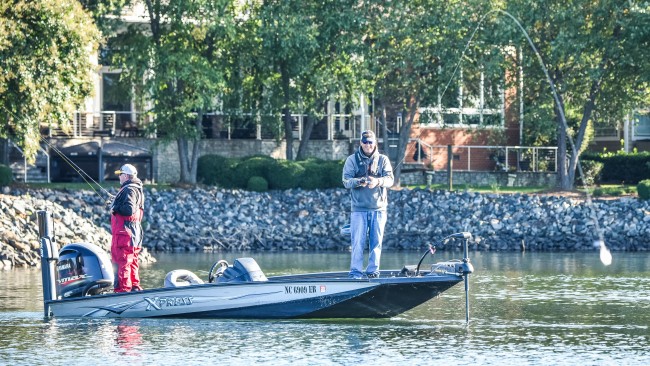 9. Baumgardner banks on Choppo and spinnerbait.

Chris Baumgardner targeted shallow docks on flats, casting to any rocks or brush he could find out on the flats in front of the docks. If the water was slick and calm, he chose a Berkley Choppo 130, gurgling it over the cover. If the wind got up and it was too rough for the Choppo, he resorted to a large ¾-ounce Lunker Lure Hawg Caller Triple Blade Spinnerbait to rip over the cover. 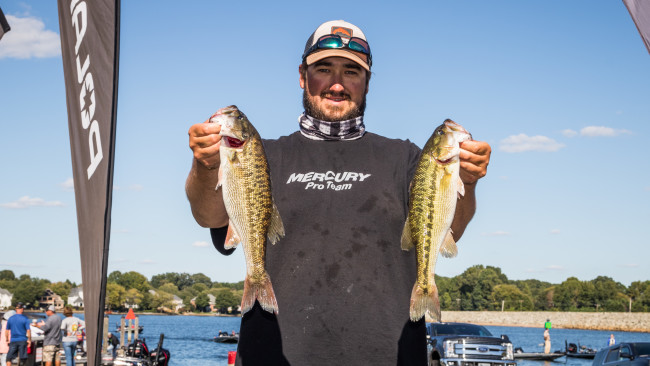 “I focused on docks leading into creeks,” Pike says. “I committed to the buzzbait for the first two hours of the morning, trying to take advantage of the low light. Once the sun got up, I switched to a shaky head and fished through the same areas. It seemed they moved out onto the deeper poles on the ends of the docks later in the day.”