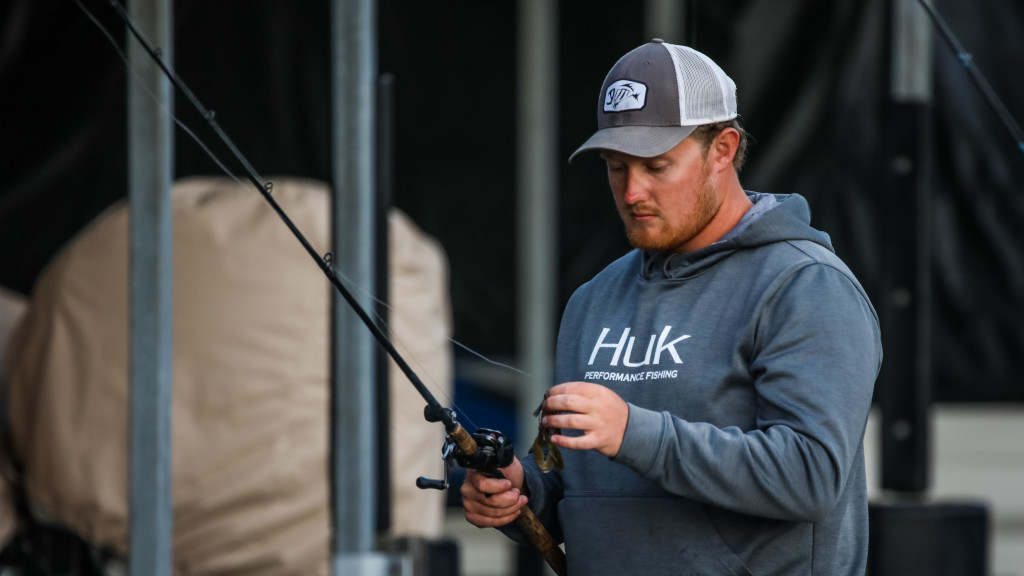 Day two of the Toyota Series Plains Division on Lake of the Ozarks has started out pretty much like yesterday – pretty weather but pretty short on fish.

With the sun popping out early, the temperatures quickly rose from the 60s into the 80s, with pros quickly shedding clothes in the delightful conditions. Unfortunately, not a single angler we stopped on this morning had a limit, though Brent Chapman was close. As soon as we pulled up he caught No. 4 while beating the bank with a vibrating jig. Though, it was hardly a giant. Still, considering he and most everyone has said the bite really picks up around noon, he was quite pleased to have an early keeper.

Day-one leader, Corey Cook, was among those without much and waiting for the later bite. While yesterday he caught two good ones first thing, he managed a lone 2-pounder in the first hour or so while we watched him. He’s methodically pitching a jig to key docks and seemed unphased by the lack of early catches.

Docks and banks definitely seemed to be more in trend today compared to yesterday. The lone angler fishing deep brush was Mike Baysinger, and he didn’t have a fish. Instead, guys like James Watson (one fish early) and Joe Grafeman (two fish) were seen covering water with buzzbaits, with Grafeman having lost a 4-pounder on a dock cable and another he figured was around 6 pounds. Dillon Saffle also was on the topwater game, but he was hitting the ends of docks with a popper, which had produced a pair of small spotted bass.

Jack Covas was swinging for the fences with a big swimbait around docks but hadn’t found any takers, and Travis Coleman was left shaking his head. He had one fish pitching a jig to docks in a cove so loaded with shad they blacked out electronics and could be seen swimming all over the surface.

Unfortunately, outside of Cook, our crew was unable to locate anyone else at the top of the leaderboard. As happened yesterday, the midday sun should get the fish biting, especially for the dock anglers. We’ll see if that holds true come weigh-in starting at 3 p.m. CT.