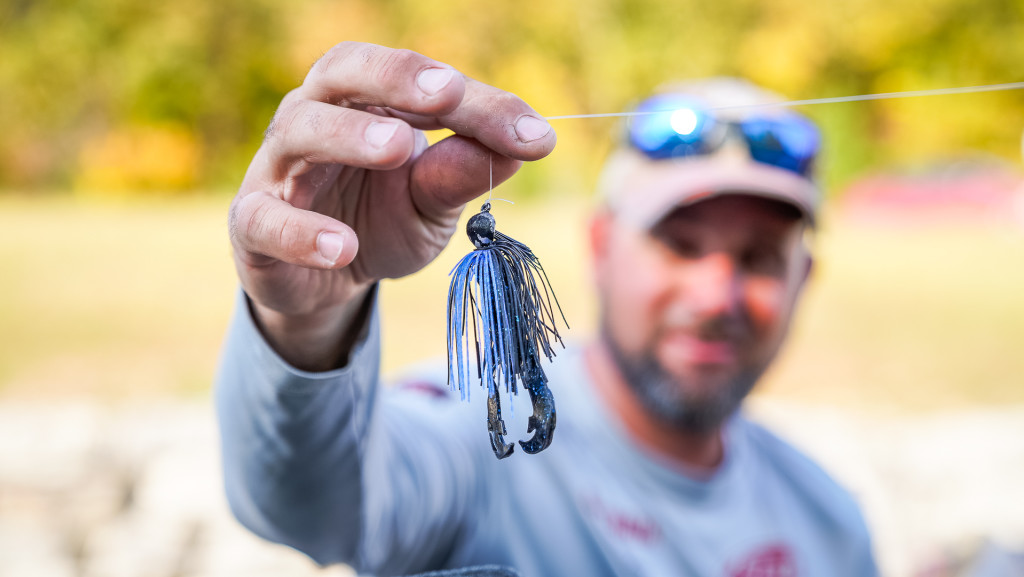 Jigs and topwaters – that’s pretty much all you need when it comes to fall in the Ozarks.

Sure enough, nearly every angler in the top 10 utilized one or both. Though, there were a few wrinkles thrown in the help set anglers apart.

Here’s a look at what the best of the bunch were throwing. 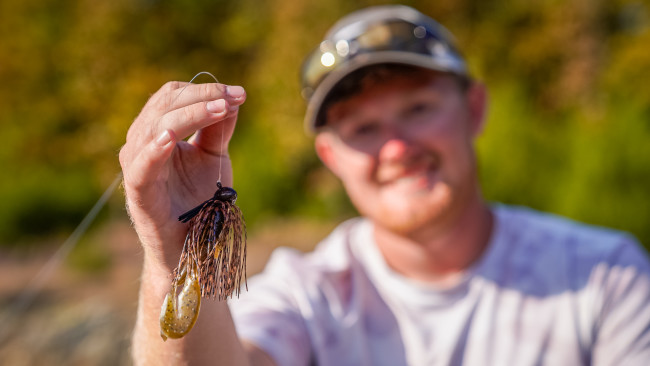 1. When his boat broke down at the start of the final day, Corey Cook only grabbed two rods and a tiny tackle box when he hopped in the second boat because that’s all he needed. And really, he just needed one rigged up with a homemade ½-ounce football jig with a green pumpkin Zoom Super Speed Craw trailer. He flipped it to brush he’d sunk around docks and never did anything else on the way to the win. 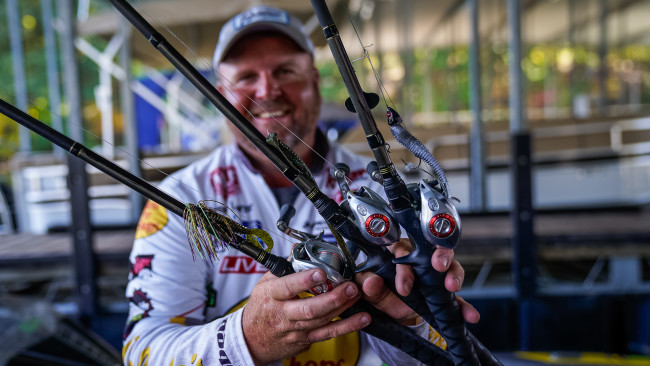 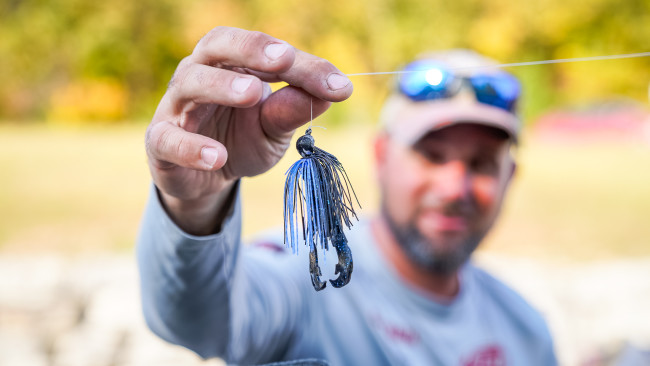 3. There’s no secret about what Shane Long likes to do on Lake of the Ozarks. He likes to run up the river a ways and throw a ½-ounce JaKKed Baits DoKK RoKK with a Strike King Rage Craw trailer. He alternated between brown and black and blue jigs depending on water clarity. 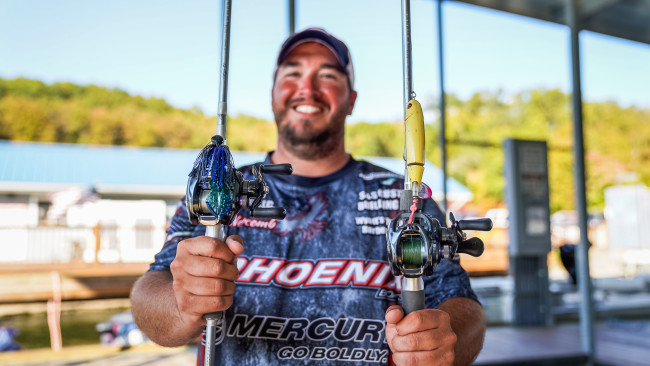 4. Making his fourth top 10 in five years of FLW tournaments on Lake of the Ozarks, Andy Newcomb says the majority of his weight came on a ½-ounce black-and-blue homemade jig with a BioSpawn Vile Bug trailer, which he flipped to docks where the backs were in 4 feet of water or less. He also threw a River2Sea Whopper Plopper 130 (bone) to larger shoreline rocks for his bigger bites. 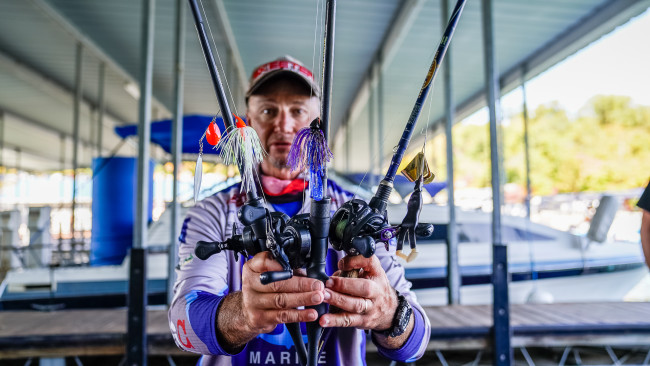 5. While he started “down home” near takeoff the first day, Roger Fitzpatrick ended up making the farthest run of the top 10, going all the way to the 90-mile marker. Up there he flipped an Omega Flippin’ Jig with a Zoom Ultra Vibe Speed Craw trailer to anything shallow. He also mixed in an Omega Alpha Shad Buzzbait trailered with a Stanley Ribbit and an Omega Genesis Ti Spinnerbait in a custom color. 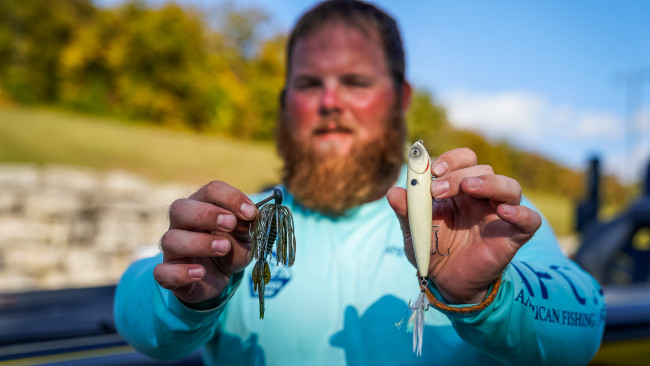 6. Generations of history on Lake of the Ozarks allowed Lawson Hibdon to run all over the lake for three days. Regardless of where he fished, he caught the majority of his fish on a ½-ounce homemade jig with either a green pumpkin or black-and-blue Strike King Rodent trailer. He also mixed in a homemade football jig with a Strike King Rage Craw trailer and a Reaction Innovations Vixen. 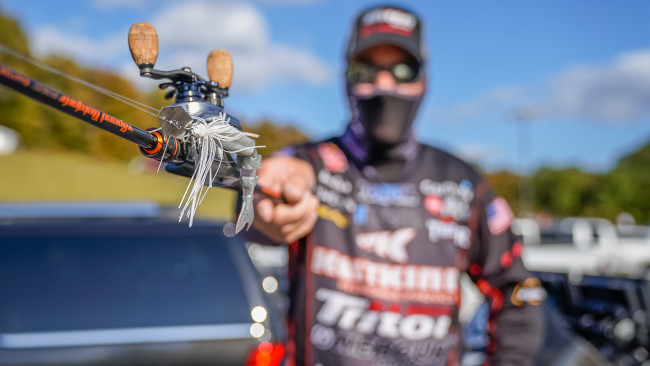 7. There was nothing fancy about Brent Chapman’s pattern. He threw a shad-colored ½-ounce vibrating jig with a swimming trailer and “kept it wet,” burning down rocky banks. 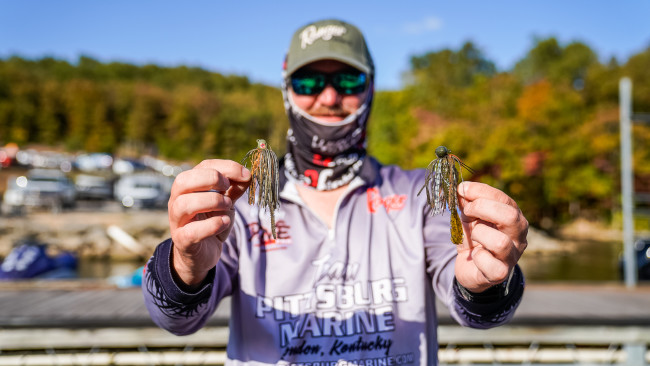 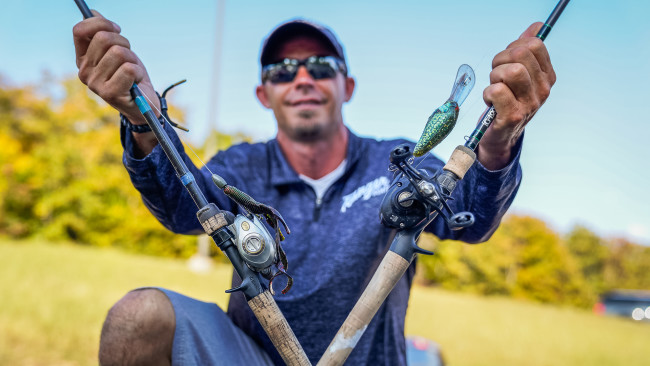 9. Offshore brush burned a lot of anglers this week. Joe Wieberg wasn’t one of them, as he managed to catch enough each day in the Gravois arm cranking a Norman DD22 with a Crank Wraps crappie pattern on it or dragging a ¾-ounce Missile Baits D Stroyer (California love). 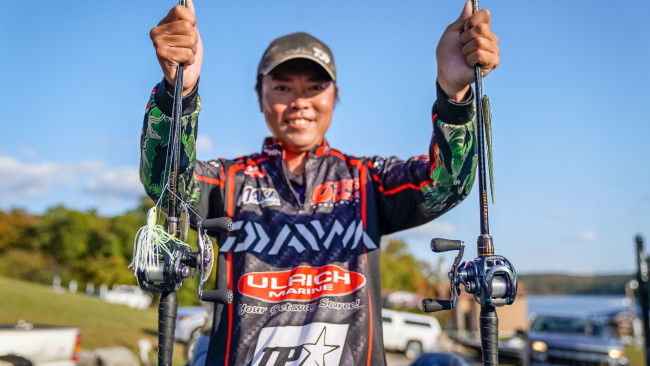 10. Takayuki Koike hails from Japan, where some of the more famous and unique finesse presentations hail. Sure enough, he used one of them this week. Often called the “free rig,” Koike rigged a green pumpkin Yamamoto Kut Tail Worm with the tail dyed chartreuse on an offset worm hook, but instead of Texas rigging it with a bullet sinker, he put a sliding ¼-ounce drop-shot sinker out in front, which gives it a different action. Koike also caught a few fish on 1-ounce Deps spinnerbait.