Top 10 Patterns from Lake of the Ozarks 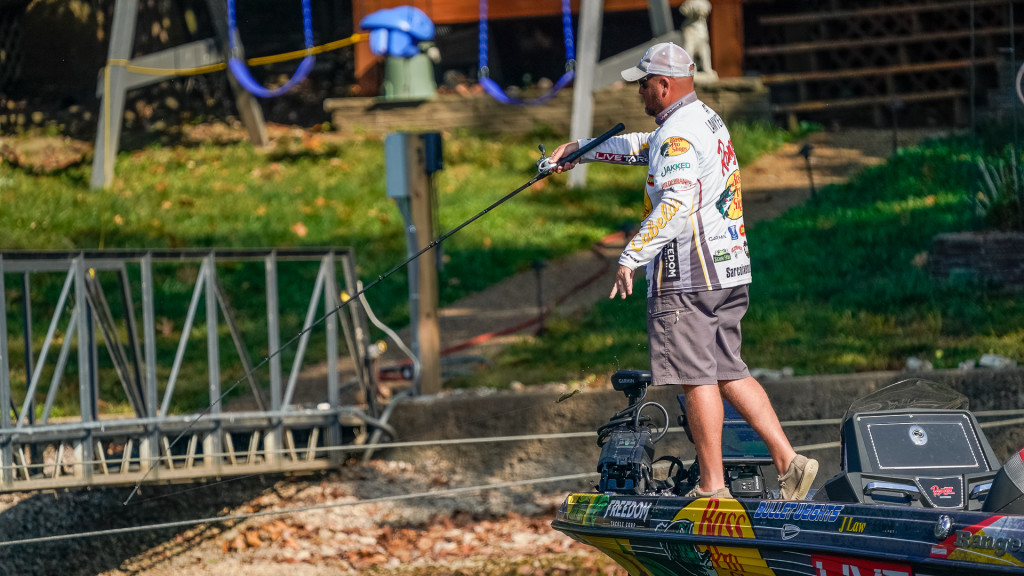 Jeremy Lawyer Photo by Jacob Fine.
How the cream of the crop got it done in the second Plains Division event
October 11, 2020 • Sean Ostruszka • Toyota Series

Five straight years of Lake of the Ozarks hosting a Toyota Series Plains Division event in October usually takes the guesswork out of what to expect.

Anglers pretty much did what they’ve come to know as tried-and-true patterns on the historic fishery. Even the winner, Corey Cook, simply flipped a jig to brush under docks – a long-standing winning pattern.

Yet, even with most anglers doing the same things as everyone else, the majority of the top 10 found little ways to get key bites or grind out limits to set themselves apart. 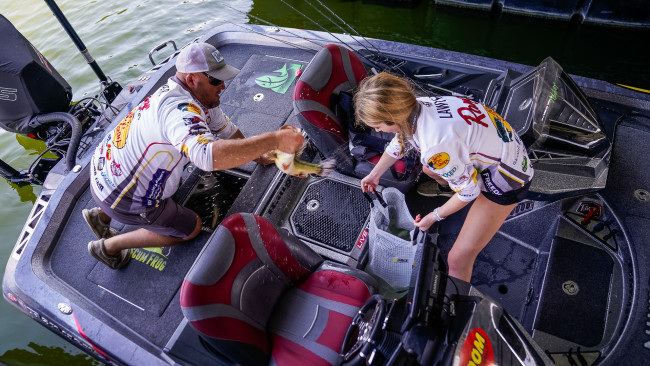 If the tournament was one day longer like what he fishes on the Tackle Warehouse Pro Circuit, Jeremy Lawyer stood a really good chance at taking home the victory. Instead, he had to settle for second.

Fishing the lower end of the lake, Lawyer managed to do something no one else did, which was improve his weights every day. He started out on day one throwing a Freedom Tackle Buzzbait. But as that bite fizzled the second day, Lawyer made a key observation.

“What bailed me out was I found some brush with my Garmin Panoptix LiveScope just here and there,” says Lawyer. “In practice I didn’t really even try and fish it. Then Friday, every time I got around some while I was flipping docks I’d get a bite. So I decided to go and hit some of that brush with my LiveScope, and every piece of brush had a fish in it.”

The result was him culling through 10 or 12 fish near the end of Friday, including a 5-2 with one minute to go while flipping a “perchy looking” Bullet Weights Tungsten Skirt Punch Weight with a Zoom Z Craw Jr. The area he caught the big one is where he started the final day, and it produced another 5-pounder, a 4-pounder and a solid keeper in the first 45 minutes.

“We were really rolling,” says Lawyer, who flipped with 25-pound Sunline Shooter fluorocarbon. “So we spent the rest of the day back in there.”

Unfortunately, the hot start cooled off quick, and it wasn’t until late in the day when he switched to a 5/16-ounce JaKKed Baits J-Law ShaKKer HD head with a Zoom Magnum Trick Worm (green pumpkin blue) that he landed the last two.

“Friday, I caught four keepers off one corner of a boat dock, and I didn’t really know why,” says Lawyer. “So, Saturday, I went there, flipped to it a few times and nothing. So, I flipped that worm in there and dead sticked it, and after about 20 seconds my line just started swimming. But those were the last two I caught.” 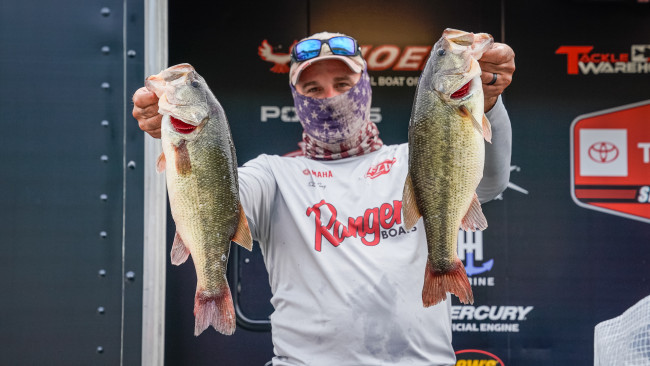 3. Long swings for fence but still comes up short

It’s been more than a decade since Shane Long won a Toyota Series event on Lake of the Ozarks, and he was plum tired of small trophies.

Well, he didn’t zero, but his homerun swing still only got to the warning track.

While he’s known for making extreme runs up the river, Long stayed a bit closer (at least for him) by hanging around Bollinger Creek. There, he kept things about as simple as he could.

“I just picked up a ½-ounce JaKKed Baits DoKK RoKK with a Strike King Rage Craw trailer and threw to everything I could see to throw it to,” says Long, who alternated between brown and black and blue depending on water clarity. “I caught some in inches of water and some in 15 feet. I’d just pull in an area and fish everything.

“I left it all out there the final day. It is what is it.” 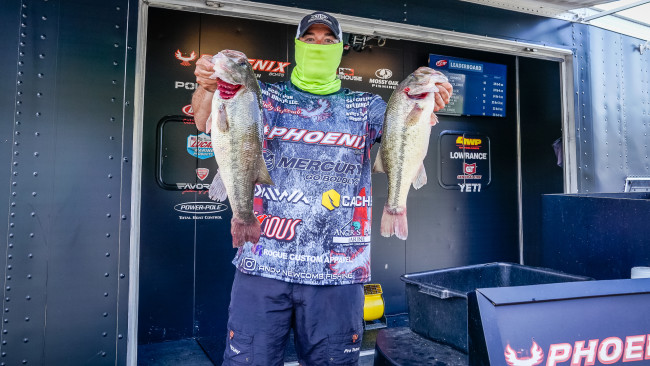 Andy Newcomb started fishing FLW tournaments in 2016. He has four top 10s on Lake of the Ozarks and was in second going into the final day of this event. Not too shabby.

This week, Newcomb went with a two-pronged approach.

“I threw a  River2Sea Whopper Plopper 130 (bone) and ½-ounce black-and-blue homemade jig with a BioSpawn Vile Bug trailer,” says Newcomb. “Those caught about half and half of what I weighed in.”

The topwater was tossed around big, shoreline rock where the larger gizzard shad were starting to migrate. He had to cover a lot of water to get bites, but when he got a bite it was a big one. Meanwhile, the jig was reserved for pitching docks. It didn’t matter if the docks were all the way in the back of creeks or on the main lake. They just needed to have baitfish nearby and the backside of the dock to be in 4 feet or less of water.

As for area, he definitely burnt some fuel.

“I started around takeoff, but Friday afternoon, I ran up three river arms,” says Newcomb. “I thought the size of the fish up there was better. So, if I was going to make a run at [the win], I figured I needed to go up there the final day. It just never went down up there, though.” 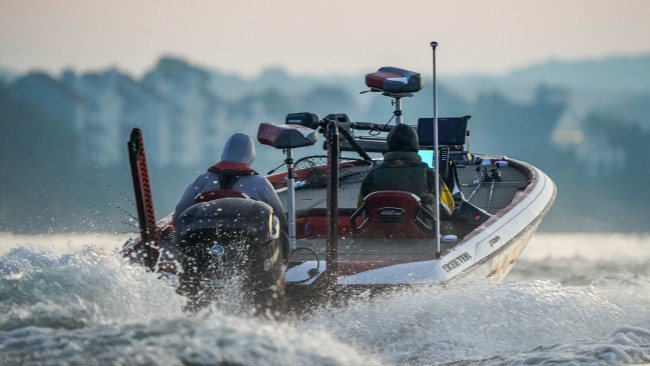 5. Long run a little too late for Fitzpatrick

Had he made the decision a day earlier, Roger Fitzpatrick may have truly been in contention to win the tournament. Instead, his decision to not make the run all the way up to the 90-mile marker until day two of the event probably cost him.

“Last Sunday, during the Big Bass Bash, I wanted to get away from everyone,” says Fitzpatrick. “I went to the river and found one little stretch with some good fish on it. I had a really great practice down here. So, I didn’t go and ended up just surviving the first day. On day two, though, I only had one little swimmer in the box around 9:30 a.m. and I said, ‘let’s go.’”

Up the river, he was fishing “very, very specific targets” that were shallow.

“Wood, a post on dock, a foam pad – the good ones wanted to be shallow,” says Fitzpatrick. “You could catch some in any part of the dock, but they were just really, really shallow.”

Regardless of the target, he caught most of his fish flipping an Omega Flippin’ Jig with a Zoom Ultra Vibe Speed Craw trailer. 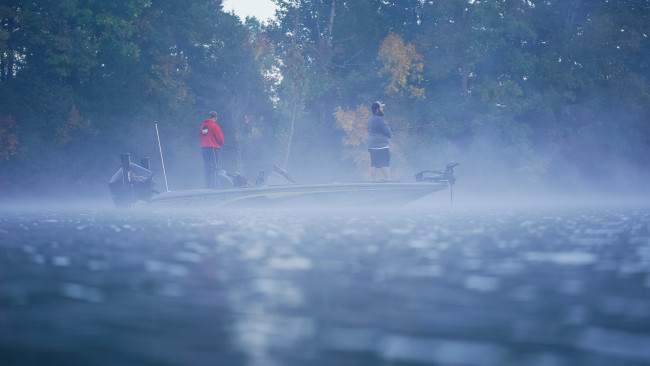 Few families have more history on Lake of the Ozarks than the Hibdons, and Lawson Hibdon made the most of that no matter where he went.

“I didn’t practice very much and just fished a lot of history,” says Hibdon.  “I grew up on the lake. So, I just went around fishing docks and spots you know should have a fish, especially ones with shad.”

Now, the one problem with Hibdon’s scrambling plan is it often left him scrambling. One day one he stayed close to takeoff the majority of the day. Day two, he made a left after going under the 54 bridge all the way up to the 60-mile marker. And Saturday, he made a right up to Gravois.

Even his bait selection was all over the map.

“I caught the majority of my fish on a ½-ounce homemade Arkie jig with either a green pumpkin or black-and-blue  Strike King Rodent trailer,” says Hibdon. “But I also mixed in a homemade football jig a little bit with Strike King Rage Craw. I caught a few on a  Reaction Innovations Vixen and a crankbait. It was just a mixed bag.

“I struggled all week to get bites. I just tried to keep my baits in the water anywhere I thought I could catch some big ones like I had in the past.” 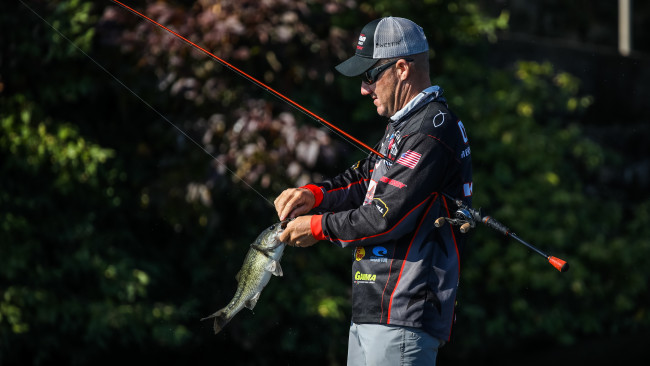 Covering water was hardly a novel pattern this week on Lake of the Ozarks, especially with a jig. Doing it with a vibrating jig, though, was a bit different than most, which helped put Chapman ahead.

“That’s the one thing about this lake right now,” says Chapman, who hung near takeoff the first two days before running up the river the final day. “I was totally confident no matter where I’d go in just putting the trolling motor down and covering water. I wasn’t getting a lot of bites, but about the time I was going to give up one would bite it.”

There really was nothing special about his shad-colored ½-ounce vibrating jig with a swimbait trailer. Chapman says he just always had to “keep it wet,” especially around rocky banks.

“They were on more the chunk-rock banks,” says Chapman. “Depth didn’t really matter. I caught fish in the back of coves in a foot of water and some behind docks in 60 feet. I literally just kept the bait wet and covered as much water as I could.” 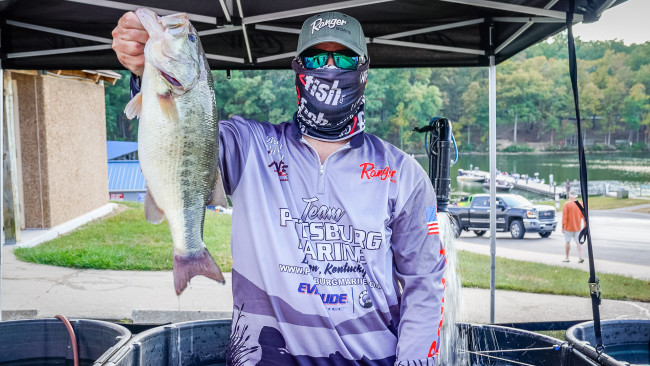 Having never been to Lake of the Ozarks, Brian Wilson was hoping to find anything that stood out to give him an edge. Sure enough, he did.

“I found a rock seem going up in a bay in about 20 feet,” says Wilson. “There were plenty of shad around, and the bass were using that seem to feed.”

“I knew late on day two that my fish were leaving,” says Wilson. “I abandoned it yesterday afternoon and caught three off docks. I tried it again today but they were gone.” 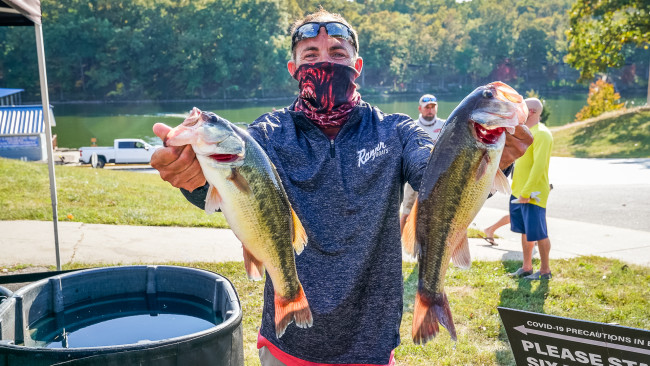 Deep brush was how most anglers scored big during practice, but it burned most anglers come the tournament. Joe Wieberg wasn’t one of them.

Targeting deep brush in 15-35 feet in Gravois, Weiberg was able to catch 10 keepers a day cranking a Norman DD22 with a Crank Wraps crappie pattern on it or dragging a ¾-ounce Missile Baits D Stroyer (California love).

Yet, just like how it burned others throughout the tournament, it finally burned him on day three.

“All my fish were there, but they just would not bite,” says Wieberg. “I could see them on the graph, but they weren’t having it.” 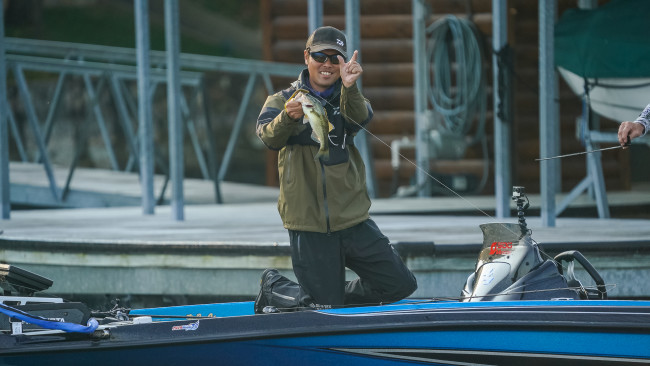 When looking for new finesse presentations, Japan tends to be the source, as the drop-shot, Neko rig and Tokyo rig have all made their ways across the Pacific Ocean to transform bass fishing. Well, Takayuki Koike showcased another new one this week to get him in the top 10.

Often called the “free rig,” Koike rigged a green pumpkin Yamamoto Kut Tail Worm with the tail dyed chartreuse on an offset worm hook, but instead of Texas rigging it with a bullet sinker, he put a sliding ¼-ounce drop-shot sinker out in front, which gives it a different action.