Mixed results so far for the Toyota Series anglers 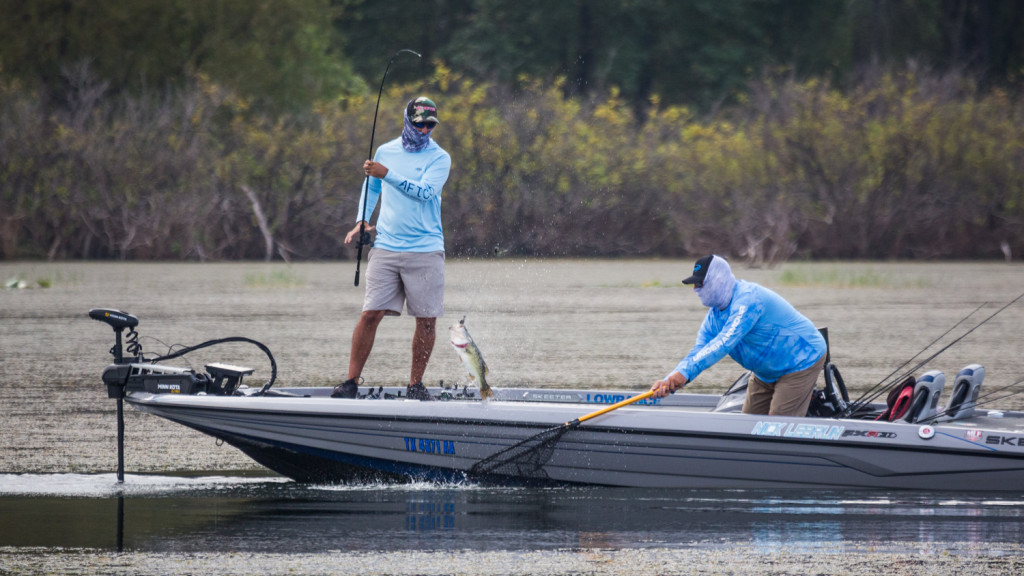 Day one of the Toyota Series Southwestern Division event has been beautiful so far, with mild weather and apparently decent fishing. Though Rayburn isn’t kicking them out like it can, there seem to be plenty of ways to catch fish and at least one pro has seen some success.

The best that we found was Chris McCall, who has won plenty of money on Rayburn before. Mid-morning, McCall had about 18 pounds in the ‘well and he epitomized the variety that’s on the table this week. While we trailed him, McCall threw a Carolina rig offshore and frogged up shallow.

Outside of McCall, we haven’t seen anyone crushing it, but we also haven’t seen some of the top targets. Darold Gleason, Todd Castledine, Zack Birge and a few notable others are a mystery that will be revealed at weigh-in.

Notably, it’s been pretty cloudy and dark up the lake, but the lower end cleared up and got sunny quickly. A lot of the pros that have been frogging want the sun, and that’s only now becoming a factor on the whole lake.

As for tactics, a real variety have been put into action early. Nick LeBrun started his day flipping, and we’ve seen plenty of anglers frogging, especially above the TX-147 bridge. Of course, there is also a lot of standard offshore action happening with a Carolina rig and crankbait. Interestingly, Dakota Ebare was seen slinging an umbrella rig, which would be a neat deal to see play.

Below are all the updates we gathered on the water this morning. Weigh-in starts live online at 3:30 p.m. CT.

Charley Slaton – one good one and one small keeper