Brisk fall weather rolls in and the leaders are doing alright 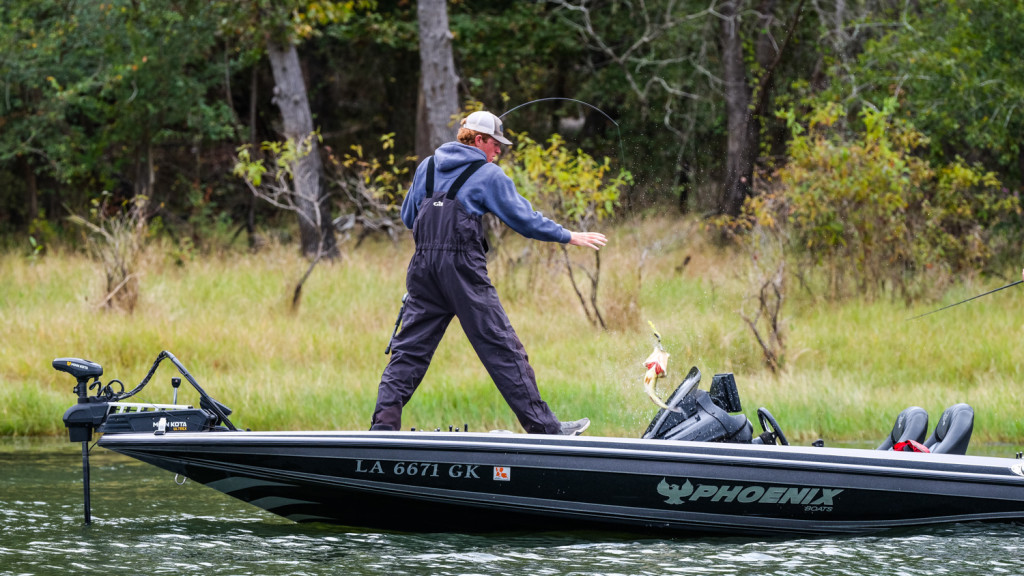 Day two of the Toyota Series Southwestern Division event on Sam Rayburn has been exactly as forecast. Somewhat chilly, with scattered rain and wind in the morning, it’s starting to brighten up now. Though most fished with jackets and bibs on in the morning, it’s now very comfortable and the sun is out pretty steadily.

We started out on the leader, Cole Moore, and watched him boat two keepers early. His first came on a walking bait, and his second fell for a frog. He began the day in the San Augustine arm.

In second, Aaron Johnson is having another solid day so far. Late morning, Johnson had a limit for about 14 pounds. Throwing a small crankbait around grass, Johnson says most of his better quality came in the afternoon on day one, so he’s well on track.

Otherwise, we didn’t have much luck running down contenders, but there are going to be some more good bags at weigh-in. Over in the San Augustine arm, Sheldon Collings has 14 pounds, Bill Cook has four and Colby Miller has a 5-pounder. On the more popular Angelina side of the lake, Dicky Newberry has 13 pounds, Chris Lewis caught one on a wake bait and Brad Hillebrandt has a three for nearly 9 pounds.

As far as techniques go, the weather today seems to have shifted the focus to the bank and the grass, with a little less emphasis on the offshore bite. With the whole lake getting sunny now, more pros will likely pull out frogs for the afternoon, but it could also bode well for the offshore and brush pile bite.

Only the top 10 make the final day, and we’ll find out who that is at weigh-in today. It starts live online at 3:30 p.m. CT and should be a good one.