Au Best in the West 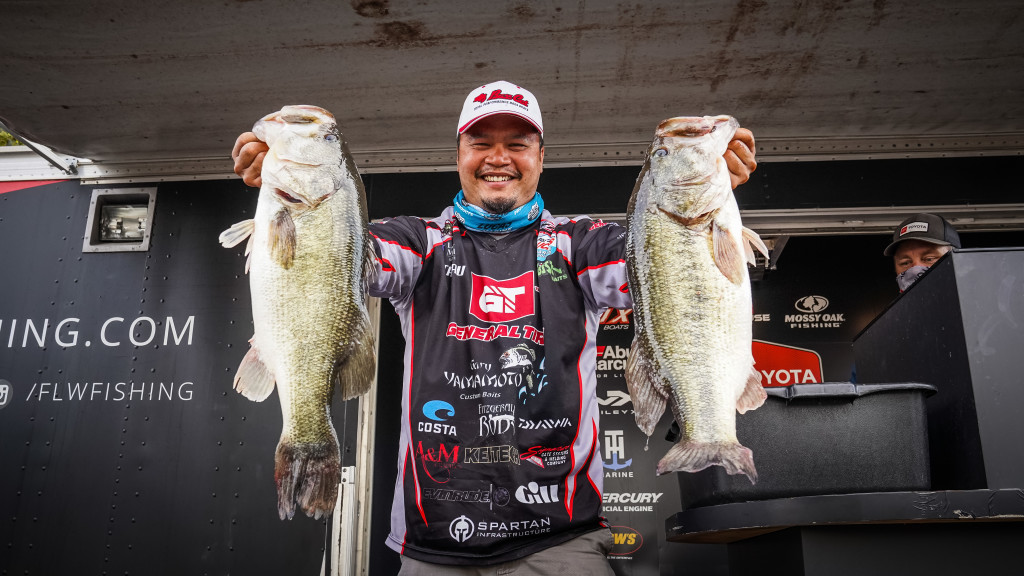 While 2020 has been a year to forget for many people, Tai Au will cherish it forever. Though Au has dabbled in Toyota Series competition over the span of nearly a decade, this was the first year he went all-in to fish the entire division. In doing so, he won the season opener on Lake Havasu, banked a top 10 on the California Delta and closed it out with another win on Clear Lake to handily win the Western Division Strike King Angler of the Year title.

Getting started in the sport

Arizona may not be the first state you’d think of for producing AOY anglers, but Au got immersed in fishing from a young age, which really helped fuel his passion.

“My dad started us fishing,” Au says. “My dad would take my brother, Vu, and I out to the local ponds and stuff and fish for pretty much anything that bit. Probably around the age of 12 my dad took us to Walmart and let us pick out a crankbait, and we went to San Carlos to the middle of a cove, threw out and anchor and after about 10 minutes of fishing my dad caught one, my brother caught one and I caught one. That really got me intrigued how fish would fall victim to a fake lure. But that was our first official bass fishing trip.”

From there, the Au brothers fished as much as they could. By the time they were 16, they stumbled upon their first opportunity at a bass tournament.

“There was a small bait shop and we saw a flyer on the counter for a tournament,” Au recalls. “All we knew how to do was throw a Texas rig and a crankbait some, but we could catch fish on a Texas rig, so we decided to sign up. It was $130 entry fee and only 30 boats. Long story short, we caught tons of fish and got our teeth kicked in.” 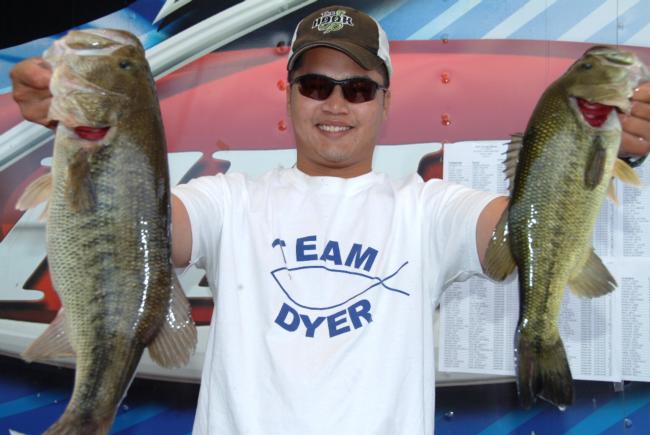 Au kept picking away at local tournaments after his first foray into the sport, but by the summer of 2010 had all but given up on the idea of tournament fishing. Having basically no money to his name, it seemed his young dream of fishing for a living had come to a screeching halt.

That is, until his brother Vu convinced him to give it another shot.

“I was pretty much at a low point in my life where I had lost everything,” the 38-year-old pro says. “Really, the only thing I had to my name was a car that my brother gave me, and I was living with my little sister at the time. I was basically jobless, and my brother had called me to come fish the [Tackle Warehouse Pro Circuit Western Series] on the California Delta with him and I told him no at least three times. Finally, he called me up and said ‘Hey, help me drive to the Delta. Sign up as a co-angler, I’ll pay for everything and you just help me drive.’ So, I decided to go.”

Having sold most all his tackle and rods, Au was working on a very, very limited selection for the major event. Still, that didn’t stop him from doing his thing and catching fish. He’d find himself leading the co-angler division heading into the final day, only to wind up in second and walk away with nearly $5,000.

“That was a lot of money to me at that time because I was dead broke and really had nothing to my name,” says Au. “It was a huge heartbreak to come in second, but the excitement from all my friends back home that were cheering for me was awesome, and I fell back in love with tournament fishing at that event.

“I was really motivated after that event because now I had a clear vision of what I wanted to do in life – tournament fish. When I got back from that event, I strapped down and got to work. No matter where the next tournament was or how much I needed to come up with, I’d plan ahead and make it happen. I’d save for three months just to fish one event.” 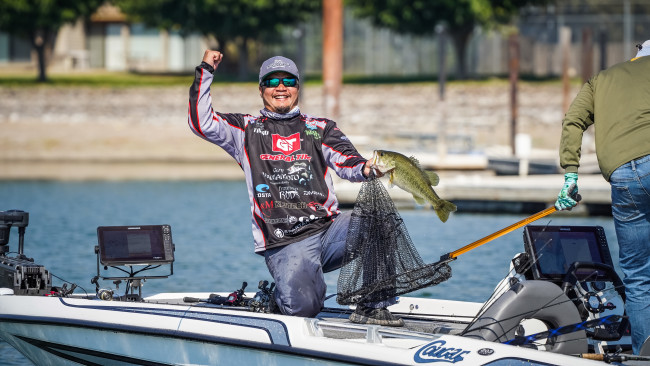 Fully committed to 2020 and beyond

For the last seven years or so, Au jumped in any Toyota Series Western Division events he could make work with his schedule or financial situation, along with putting a lot of effort into fishing the Wild West Bass Trail and the U.S. Open. After some success with the latter tournaments around 2014, Au was finally able to purchase his first big bass boat.

Since then, he’s spent time fishing tournaments when he could, along with juggling a career and a family. But when the 2020 Series schedule got released, he knew he had to put more effort into fishing the entire division for a chance to qualify for the Tackle Warehouse Pro Circuit.

“This year was the big one,” he says. “When I saw the Series was coming to Havasu, I figured that would probably be my best chance to win it. It’s not even my home lake, but I do get to fish that lake the most out of all the other lakes we fish. But I never dreamed things would work out the way they did.

With an Angler of the Year title under his belt now and all of his hard work paying off, Au isn’t ready to stop there. He plans to fish on the Pro Circuit next year in order to fulfil his dream to fish professionally – something he’s put plenty of planning and thought behind.

“It feels right,” Au says of taking the next step. “I don’t plan on setting the world on fire, but I’m just hoping to go out and do well in a few of these tournaments, not take too bad of a beating and represent the West Coast.” 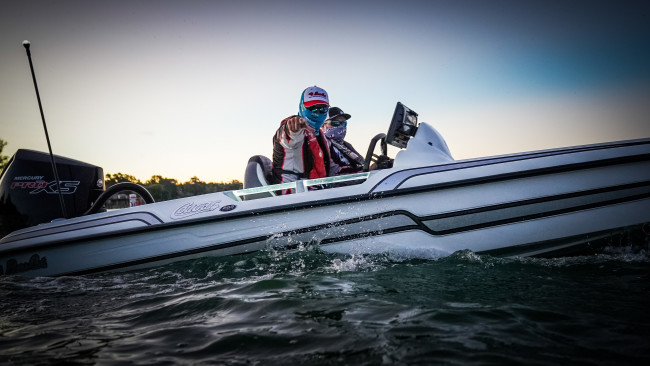 Experience on each of the three stops this season certainly played a role for the Arizona pro en route to his dominating performance this season, though a little bit of luck never hurt either. With two wins and a top 10 in a single season, you can’t argue that this was Au’s year.

Here’s a look at how it all shook out.

Starting the season off with limited practice didn’t hinder Au much.

“I had some battery issues one day of practice, but I basically just kept in the main lake, was fortunate to get a good boat draw and went to a cut and caught three big ones,” he explains. “I ran into that 7-pounder and had 26 pounds that first day.

“Since I didn’t practice a lot and wasn’t relying on sight-fishing, I just went fishing, and things ended up working out.”

Au sacked 26 pounds, 1 ounce on day one, though his weights slipped as the tournament progressed, but his 18-3 and 16-15 bags were more than enough to give him his first Series win.

Au relied on several baits throughout the event, with a Z-Man Evergreen Jack Hammer with a Zako Paddle Tail trailer playing a solid role. He also caught fish on a Yamamoto Flappin’ Hog, Senko, and about five or six on a Daiwa Neko Fat.

Of all the fisheries out West, the Delta holds a special place in Au’s heart, so naturally he was stoked to fish it once again.

“I never miss [and event on] the Delta,” he jokes. “I take that back; the only year I missed it was when my son was born. But the Delta is the place that made me fall back in love with fishing. It’s my home away from home.”

Following a tough practice, Au faced boat issues the first day and was forced to borrow a buddy’ boat, which ironically suffered battery issues on day one, forcing him to drift with current to catch 13-9. On day two, he turned things around and caught 17-8 to slide inside the top 10.

“I’m an aggressive fisherman; I like to fish fast,” he says. “But the craziest thing happened and this is the luck part of fishing. On day two, I lost a 7-pounder on a ChatterBait on the end of my cast. I reel back up, fire it back out there and get it past about where I lost her and she ate. I set the hook and got her in the boat, and it was a 7-something. That never happens.”

Swinging for the fence on the final day, he’d drop to 10th, but he was still well withing striking distance of the AOY title in second place.

Picking up his brand-new Bass Cat before the event, Au spent some precious practice time breaking in his Mercury. Because hiccups had become par for the course this season, it seems fitting he’d end the year on a high note after another rough practice.

“I had some horrible days of practice,” he says. “In two-and-a-half days of practice, I don’t know that I touched five keepers, and the biggest fish I held in my hand was a 2 1/4. Things were starting to look pretty bad for me, and I was starting to feel pretty bummed out.

“I knew I had to do well to make the top five in points to be invited to the Pro Circuit, and I had Angler of the Year on the line.”

Scrapping most of what he looked at in practice, Au eventually stopped on a place where he broke one off in practice, just hoping to get a bite.

“Because I didn’t catch a lot of fish in practice, it forced me to stay in an area and not run around as much,” he explains. “And the only reason I stayed in that area was because I got bit in practice and broke my line. That’s all I had to go off. But I pulled up there and caught a 5-pounder pretty quick.”

From there, he dialed in the flat a bit more with a Neko-rigged 5-inch Yamamoto Senko in the watermelon red color on a size 1 Decoy hook. He fished the Neko Rig on a 7-foot, 4-inch medium-heavy Fitzgerald rod with a Daiwa Certate LT reel spooled with 8-pound Yamamoto Sugoi fluorocarbon.

Seeing fish on his Lowrance units (but not getting them to bite) forced Au to pull out a Lucky Craft LV 500 in ghost minnow and chartreuse shad to rip it through the area to trigger a reaction strike.

"The key was to rip it as hard as I could to get them to react," he says. "I sat in one spot and made repeated casts to the same place. If you could get the school to fire up, you could catch four or five in a row."

Au’s last day of the season ended how it began – with another 26-pound limit and another Series title. 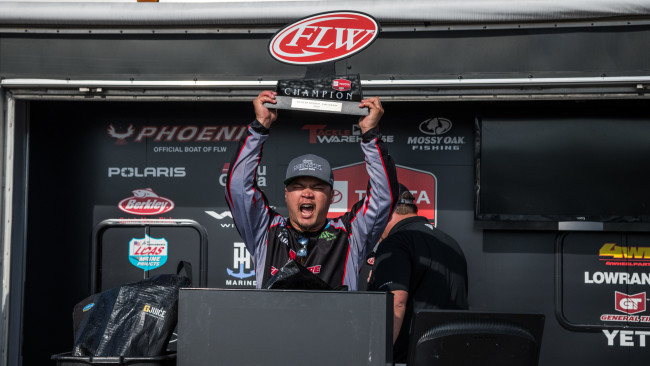