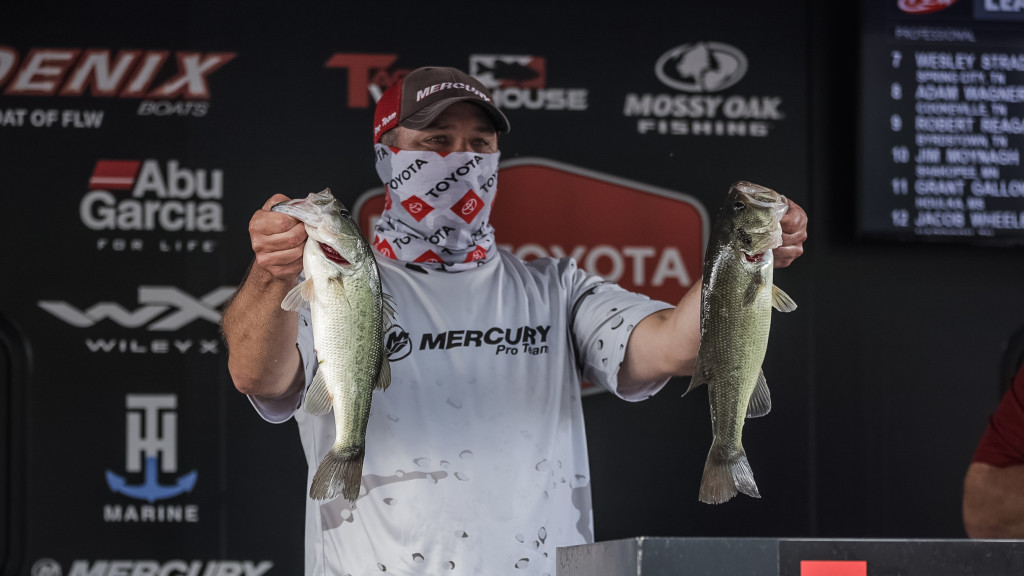 As tough as Dale Hollow has been fishing lately, it’s not really a surprise that only nine anglers managed to crack double digits after day one of the Toyota Series Central Division finale. What was surprising, though, was to see one angler – Harriman, Tennessee’s Jonathan Bowling – grab a lead of more than 1 1/2 pounds. Given the conditions, that’s a huge lead.

“I was expecting to catch 9 to 12 pounds today if I got all my bites in the boat,” Bowling says. “I only had six bites, but I got five in the boat.”

That goes to show just how tough Dale Hollow can fish at times, and also how dialed-yin Bowling is. He had confidence he could get the right bites to be in contention and he executed his plan to near perfection.

“I’m just fishing shallow – junk fishing,” he explains. “Flipping a jig, throwing a spinnerbait and a ChatterBait and a [lipless crankbait]. I can’t do the stuff they’re doing out in the deep water, so I just stuck to the bank.”

Sticking to his guns, Bowling put together a milk run of vertical cover in shallow water that encompassed about 30 miles of the lake. He says everything he fished had to be inside a protected bay, and horizontal cover was out of the question.

While Bowling is, by his own admission, a Tennessee River fisherman, he lives close enough to the mountain lakes of Norris, Douglas and Cherokee in East Tennessee to have a good feel for Dale Hollow. The similarities aren’t exact, but there are enough of them to make Bowling feel right at home.

“[Dale Hollow] is just a deep clear mountain lake with no current,” he says. “Dale Hollow, Cherokee, Douglas and Norris – they all fish similar. Norris and Dale Hollow are extremely clear, so my experience on Norris helped me a lot here. There are some similarities even though they’re not exactly alike.”

Having earned Angler of the Year in the Volunteer Division of the Phoenix Bass Fishing League in 2018 and 2019 – with four top-15 showings on those aforementioned lakes in that span – it’s no surprise Bowling has experience to draw from this week on Dale Hollow.

Catching 13-6 on day one is one thing, but backing that up with another quality bag could prove to be another thing entirely, especially with a cold front moving in overnight that should see highs in the upper-40s and low-50s on Friday. That’s something Bowling is worried about given that he’s fishing a lot of shallow water.

“I am very worried about [the weather], but I don’t have a choice because that’s all I’m on,” he says. “This lake is fishing so tough right now. You’ve got some of the best fishermen on the planet here right now catching one or two fish; some of them caught zero.

“With what I got today, I’m going to scramble and try to do the same thing tomorrow, and if there’s still some [fish] there tomorrow, I’ll be in good shape.”

If not, Bowling has a Plan B that involves some deeper water and some smaller fish, but that might be all he needs to fish on Saturday – and that’s all he’s really worried about.

“That’s the plan is to fish on Saturday,” Bowling says. “Winning is just a bonus. I just want to be here for the third day.”

At the very least, he’s off to a great start. 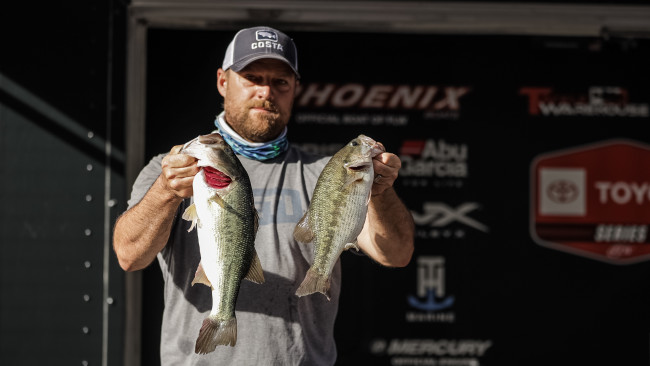 Josh Lockard operated from chapter one of the co-angler playbook on Thursday to grab the lead with 8 pounds, 14 ounces. Instead of trying to fit a square peg in a round hole and fish fast, the Somerset, Ky., co-angler opted to drag slow and deep behind his boater, Nick Ratliff (sixth place).

While Ratliff was fishing individual brush piles, Lockard was keeping an eye on the console electronics, always aware of what the boat was drifting overtop of. He stuck to his plan, despite going a long time without a bite.

“This morning I caught a magnum spot probably about 8:30 and went three or four hours without another bite,” he says. “It was a grind. It’s very slow fishing. I’ve been down here practicing a couple times this week and it’s been very slow.”

Living less than an hour and a half from Dale Hollow, Lockard was able to practice a couple days, during which he spent some time cranking and winding a spinnerbait. He says those are certainly tools he has at his disposal depending on how his day two boater decides to fish, but he’s likely to stick with what gave him the lead on day one.

“The fish are not pulled up on the bank yet,” he says. “They’re still out in their summer places. They’ve not moved out to that fall pattern really because of that water temperature. If you can hit cover out there in that 20 to 28 foot of water, there’s liable to be a bass around there right now.”

To do that, Lockard is going to have to keep on dragging. He’ll just make some minor adjustments as needed.

“I just have to adjust,” he says. “If I do decide to just drag behind, I’m going to have to go to a heavier shaky head or pick up a 3/4-ounce jig or 1-ounce wobble head to keep bottom contact regardless of how fast he (his boater) is fishing.”

After cruising to a win by almost a 12-pound margin on Pickwick back in May, it’s safe to say Lockard has things pretty well figured out this year.