Challenges Ahead on Dale Hollow

Conditions lining up for tough sledding in Central Division finale 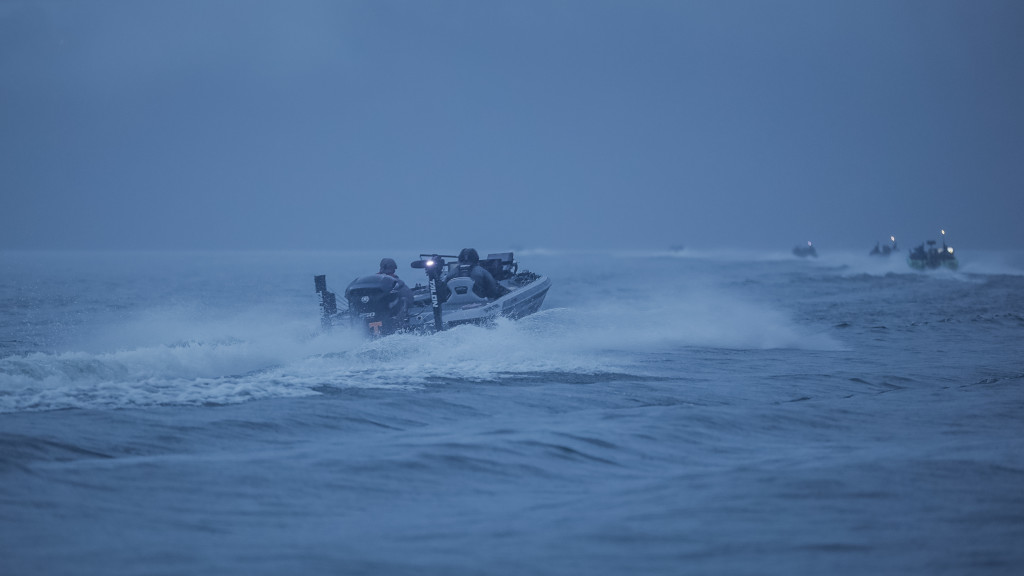 Despite an unusually long summer that hasn’t really given way to fall yet on Dale Hollow, the start of the Toyota Series Central Division finale has an undeniable fall feel to it. Rain drenched the region on Wednesday, and day one takeoff proved to be more of the same, with temperatures still hovering in the low- to mid-60s and more rain hanging around for at least part of the morning.

The bulk of the rain should move out this afternoon, but a cold front is moving in behind the rain. After a forecasted high of 70 degrees today, it won’t get any warmer than about 50 degrees on Friday before bumping back into the low-60s Saturday.

What does that all mean for the bite on Dale Hollow? It’s hard to say, but it almost certainly has to improve on what was a pretty rough week leading up to the event. 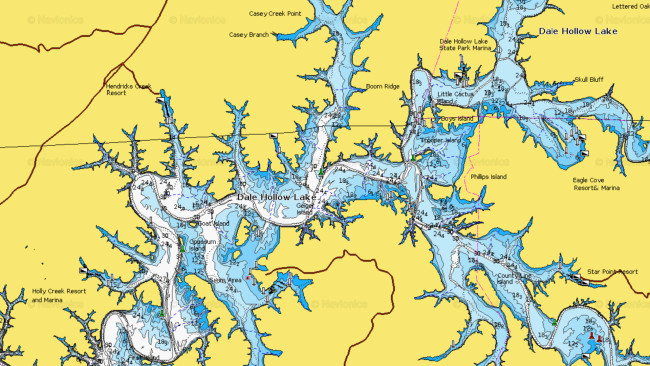 Because it’s a flood control reservoir, water levels at Dale Hollow can fluctuate enormously. Right now, the lake is about 10 feet below full pool (641.5). That water level is likely to stay about the same, even with the rain that’s already fallen. TVA projections show another inch or two or water level decrease by the end of the weekend.

Rocky with plenty of shoreline cover (and usually ample grass), there’s almost always a shallow bite to be had at Dale Hollow, especially in the lake’s many creeks (like Sulphur Creek) and major tributaries (like the Wolf River). The grass might be the true wildcard this week, though, as there isn’t as much as many anglers were expecting to find at this point in the year. Those who do find productive grass might find themselves with a distinct advantage. 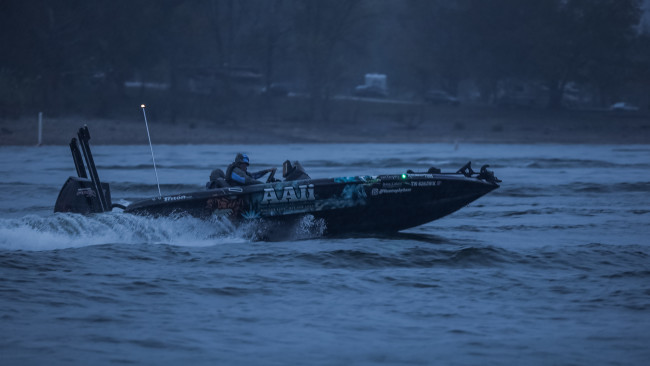 It’s been an odd “fall” at Dale Hollow, mostly because there hasn’t really been one. Water temperatures are still hovering in the high-60s, which puts the typical fall transition well behind its usual schedule in terms of bass movement. There might be some decent schools that have already grouped up and started moving out deeper, but most anglers have been finding their fish in practice up shallow – and sometimes super shallow.

Brent Anderson, who hails from Kingston Springs, Tenn., and is currently seventh in the Central Division Angler of the Year standings, has never fished Dale Hollow in the fall. After having spent a lot of his summer graphing offshore on lakes like Pickwick, he’s had enough of starting at his electronics. This week, he’s gone shallow.

“I totally wrote off fishing deep,” he says. “There’s a lot of guys scanning and fishing stuff – structure, big flat points and stuff. I did it today and caught two big old crappie and some bluegill.

“This time of year, I just like to chunk and wind and go. I’m over scanning. I got that out of my system at Pickwick.”

Anderson says he’s seen multiple wolfpacks swimming in as little as 3 inches of water in the backs of creeks, but the water is still so clear that those fish are way too easy to spook.

“The water clarity is off,” he adds. “I thought this whole upper end would have a little bit of color and it’s 10-, 12-, 15-foot visibility. Some of the big creeks are still crystal clear.”

In addition, Anderson says he’s had a hard time finding much in the way of grass – or least enough productive grass. The mid-lake area has plenty, though it’s mostly a few feet high and submerged in 12 or so feet of water. 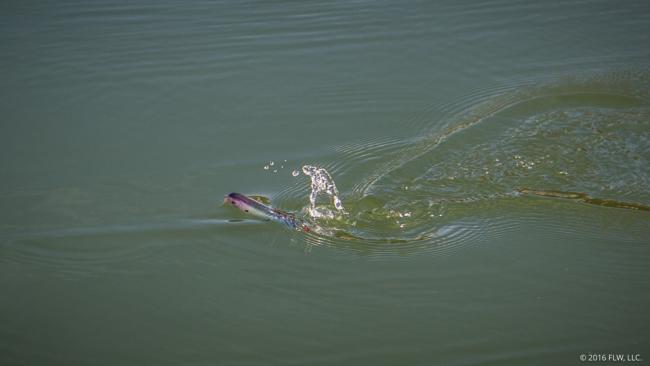 In previous years, with more grass and cooler water temperatures, this could very well set up to be a flipping and frogging tournament. Instead, the topwater bite isn’t quite at its full potential and there probably isn’t enough topped-out grass to make it a major player this week.

There’s still a shallow bite to be had, though, and there isn’t one particular pattern that should dominate during this event.

“I think [junk fishing] could be a really good player,” Anderson posits. “I’ve got a couple of areas that I’ve got several bites in and I’m going to junk fish those areas.”

And though topwaters might not be the only way to go to catch a quality limit, they’ll likely still play, especially if water temperatures drop with the cold snap coming in tonight.

“There’ll be some caught on topwater, I think,” Anderson adds. “It’s not pull up and Power-Pole down and catch 28 pounds like it used to be back home, but I’ve got some bites on it.”

And even though Anderson has given up on the deep bite, it’s a good bet some anglers have found some quality offshore structure or areas holding schools in practice that could do some damage this week.

Anderson believes it’ll be a true mix of things, but one thing is certain: A decent portion of the field is going to be in the mid-lake area near Sulphur Springs, where you can currently find the best grass on the lake.

“I went straight to grass when I got here, and Sulphur Creek is the best creek that’s got it – and everybody knows that,” Anderson says. “I’m afraid that the two areas I’m wanting to fish are going to have half the field split between them because they’re the two easiest areas to get bit in.”

As for baits, we’ll likely see a ton of different offerings across the field over the next few days. For shallow fish, topwaters, spinnerbaits, crankbaits and other shad imitators are going to be key, while worms, jigs and drop-shots will get the call both up shallow and out deep. 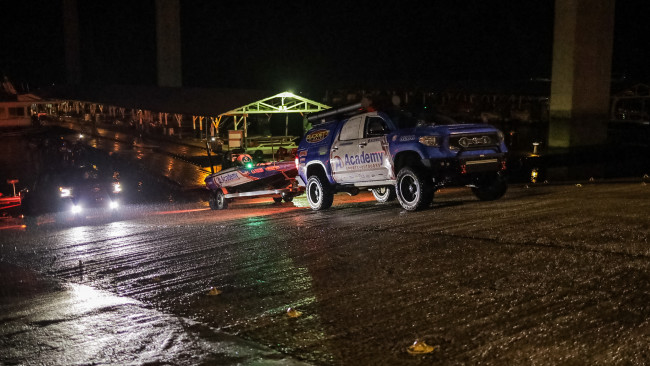 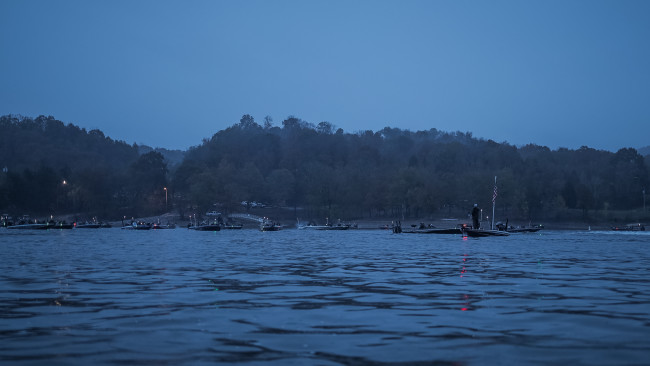 This week is unlikely to be a slugfest, but it might prove to be a little better than many anglers are expecting. Still, Anderson isn’t getting his hopes up.

None of that is to say the fishing will be as bad as Anderson’s weight predictions. Again, there are plenty of smallmouths to be caught on Dale Hollow; they just don’t typically have much impact at the weigh-in stage due to the lake’s slot limit.

Given the time of year, it’s only a matter of time before Dale Hollow starts to meander into its typical fall productivity. Maybe that’ll happen over the next few days.