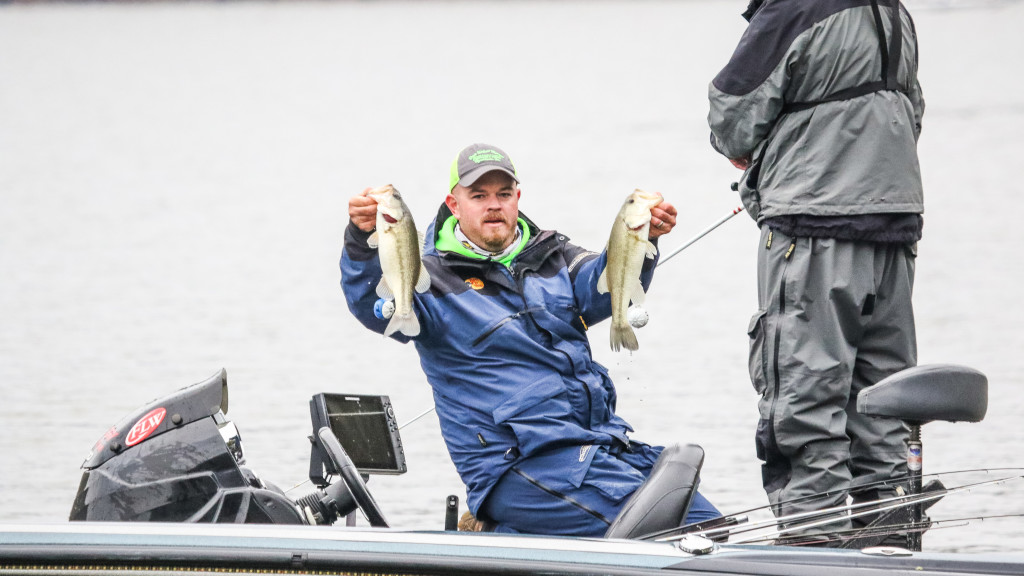 Despite some hopeful optimism that the cold front that moved in overnight might turn on the bite, day two of the Toyota Series Central Division finale on Dale Hollow has been as slow as – or slower than – day one, and that’s saying something.

As of about noon CT, we’ve only talked to one angler on the water who had a limit, and that belonged to Blake Smith after about 15 minutes of fishing. Smith has a big school he’s taken advantage of these first two days, and after catching his limit and culling once or twice, he decided to leave those fish for tomorrow. He had other schools he wanted to check in the meantime.

Otherwise, it’s been a whole lot of nothing for the rest of the field, including day one leader Jonathan Bowling. We found him fishing shallow in a marina around 10 o’clock. He reported having zero keepers in the box, though he said he’d lost three good ones at that point. Anthony Roy, likewise, had zero keepers. Roy was gracious enough to give his co-angler, Samuel Maxwell, the first crack at a keeper, as Maxwell entered the day third in co-angler standings in the division and needed to catch a fish to secure his spot in the Toyota Series Championship.

Water temperatures on Dale Hollow hovered in the upper-60s and lower-70s leading up to the tournament, and while the cold weather didn’t move in too long ago, it’s been enough to lower water temps into the mid-60s. We observed 66.1 degrees in the Wolf River. It’ll take some time to gets those temps dropping even more, but this could be the calm before the storm. These fish need some cooler water to get into their fall patterns in earnest.

Local stick Nick Ratliff had a solid day yesterday, despite bringing just four fish to the weigh-in stage. He said he was on a bad rotation on day one. Whether that happens again today remains to be seen, but he wasn’t far from a nice limit when we ran into him around 11:20. Ratliff had three for 5 to 6 pounds at that point.

For Bill Smith Jr., the only limit he’s seen is a “Dale Hollow limit,” as he calls it – one small keeper. Smith is one of many anglers we saw beating the bank this morning. It makes sense that fish might start pulling up shallower with the cooler weather, but it doesn’t seem the fish have gotten that memo yet. Jimmy Gayhart (zero keepers) and William Campbell (zero as well) can attest. We saw both of them earlier in the day, though, so there’s no guarantee their luck hasn’t changed since then.

Other updates from around the field:

-Tommy Brown had a couple small keepers for about 3 pounds earlier this morning.

-Tim McDonald only had one fish, but it was a good one – a 5-pounder.

The sun has started poking through the clouds early this afternoon, and we’ll have to wait and see if that affects the fishing at all. No one expected Dale Hollow to be lights out today, but it’s certainty as stingy as it was yesterday so far.

Be sure to tune in to the live weigh-in at flwfishing.com at 3 p.m. CT to see how it all shakes out. We’ll have full post-weigh-in coverage to follow.